Politics, parenthood, fake news, and the truth. All of these topics were covered by journalism pioneer and former White House correspondent Ann Compton during her virtual talk at the University of Maryland, Baltimore (UMB) on Nov. 10.

The event was sponsored by the UMB Roundtable on Empowerment in Leadership and Leveraging Aspirations (UMBrella), a group that works to support the success of women at UMB by helping them enhance their leadership skills and achieve personal and professional goals. Compton’s talk was part of the UMBrella Speaker Series, which spotlights notable women from a wide variety of areas of expertise. With her storied career and impressive list of accomplishments, she was a perfect speaker for this series geared toward female empowerment.

(Watch the full program below.) 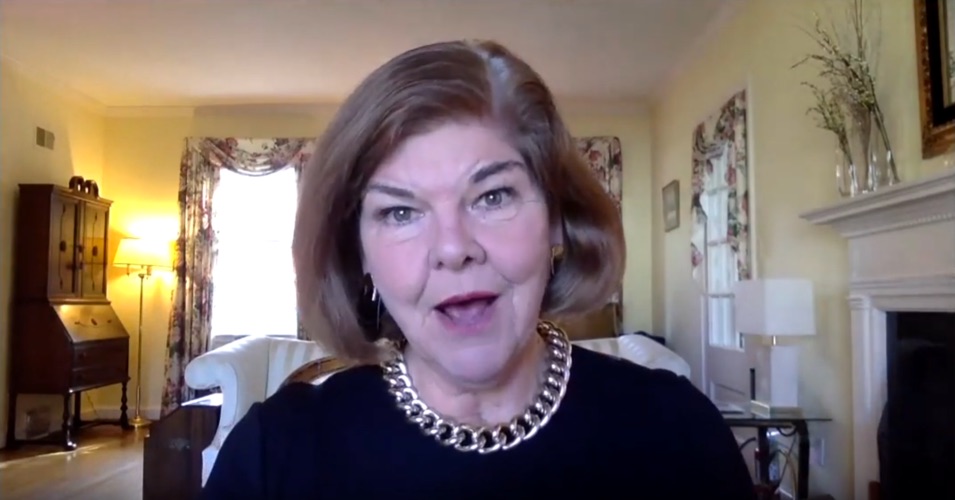 In UMB's UMBrella Speaker Series virtual event, former White House correspondent Ann Compton talks about past and current events and how she balanced work and family during her pioneering career.

Compton was the first woman assigned to cover the White House on network television, and her career with ABC News spanned 41 years, seven presidents, and 10 presidential campaigns. She traveled to all 50 states and six continents with American presidents, vice presidents, and first ladies, and she was the only broadcast reporter allowed to remain on Air Force One with President George W. Bush to report on behalf of all the news media during the chaotic hours after the terrorist attacks of Sept. 11, 2001.

Not only did she discuss how she navigated the changing culture for working women in her career, but she also talked about managing to do that in a male-dominated industry while raising four children.

“I think we can make motherhood and work work together,” Compton said. “But it does take some effort, some doing, and it takes teaching your children the importance of being independent.”

She talked about how she often had to choose between work and time with family. She recalled when she had to cover a presidential campaign during Halloween and her son, Billy, didn’t speak to her for two weeks after she got home because she had missed pumpkin carving and costumes that year.

“There were always moments that you felt you weren’t home enough, but I’ve been really blessed to have four wonderful, healthy kids raised in this very house where I’m speaking to you from now,” Compton said.

The second half of her talk touched on presidents and politics from her perspective covering the White House and Capitol Hill. She tied this all back to the important role the news media plays in American politics.

“While I never take sides on political candidates or on issues in the political spectrum, I do take the side that truth is important, that clarity and directness and honesty by the media is absolutely necessary and the bedrock of a democracy,” Compton said.

She also gave her take on the current transition of power in the White House, saying, “If presidents are so smart, what genius would even want a second term? They come to no good.”

She described the second terms of Ronald Reagan, Bill Clinton, George W. Bush, and Barack Obama, all of whom faced challenges and struggles after winning re-election. Meanwhile, President Jimmy Carter, who was denied a second term, went on to win a Nobel Peace Prize.

Another pertinent topic of her discussion was fake news. Many audience members wanted to hear Compton’s take on the fake news culture and how news outlets can maintain their trust with the public.

“Journalists have become the watchdogs challenging political leaders and societal leaders when they say things that are not true,” she said. “I’m sorry that it’s come down to the media having to do that kind of policing, but I do want mainstream professional journalists to remember that their responsibility is to the truth.

“If there is a mistake or misinformation put out there, then a whistle has to be blown. Journalists have to stand up and do a much, much stronger job with clarity and speed to correct that mistake with honesty and place it where people can see it.”

More than 220 people tuned in to the event, including some aspiring journalists. Aditi Duttachowdhury, a high school senior who plans to study journalism in college next year, chimed in during the Q&A portion to ask Compton for her advice to up-and-coming reporters and journalists.

“I think the mainstream media is going to have to do a rigorous job day in and day out to make sure that responsible, informed, ethical, and professional reporting is out there,” Compton answered before wishing Duttachowdhury the best of luck on her journey.

Compton wrapped up with an anecdote about civility in politics. She was covering the White House in 1990, and President George H.W. Bush was formulating military and diplomatic responses to Iraq’s invasion of Kuwait. Bush told reporters that the Arab world was uniting against Saddam Hussein, but Compton pointed out a Washington Post story with a photo of Jordan’s King Hussein embracing the Iraqi dictator.

“George Bush wheeled around and barked at me, ‘I can read! What’s your question?’ ” Compton said.

The next day, Compton received a handwritten letter from Bush apologizing for the interaction — and he had signed it with a smiley face.