Discussing health disparities tied to racial and economic lines in Baltimore, Steven K. Ragsdale, MSL ’17, pointed to a death that hit home at the University of Maryland, Baltimore (UMB) — the recent passing of U.S. Rep. Elijah E. Cummings, JD ’76, a fellow alumnus of the Francis King Carey School of Law. 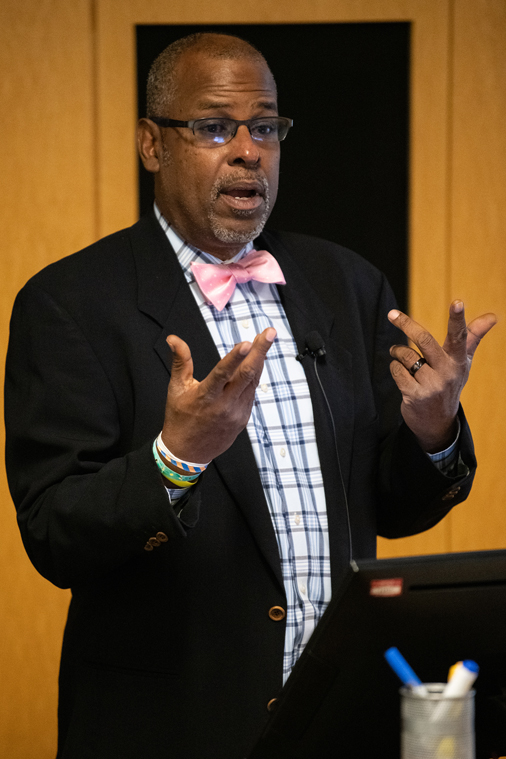 “It’s always been interesting to me how people living across the street from one another can experience a mortality rate about 12 to 13 percent different,” Ragsdale said during his UMB Diversity Advisory Council Speaker Series presentation on Nov. 6, standing in front of a PowerPoint slide that showed Baltimore City Health Department statistics on life expectancy, median income, and percentage of African- Americans living in seven city neighborhoods.

“What’s actually been a phenomenon for the last 15 years is that Baltimore makes the national news a lot, with respect to health disparities,” Ragsdale added. “So I’m curious: Did the congressman’s neighborhood have anything to do with how long he lived, because he famously never left his district and died at the age of 68.”

“One of the things I like to do is look at the social determinants of health through a historical lens, how they evolved,” said Ragsdale, a consultant and former hospital administrator with more than 25 years of experience leading hospital operations and health care innovation. That’s exactly what he did throughout his 75-minute presentation, titled “350 Years of Race, Class, and Social Systems: The Baltimore, Md., Story.”

Invited by UMB’s Diversity Advisory Council, Ragsdale enlightened the crowd of 100-plus at a School of Dentistry auditorium with sobering and sometimes disturbing facts about the history of systemic and intentional discrimination in Baltimore and Maryland.

Ragsdale was introduced by UMB President Jay A. Perman, MD, who noted the speaker’s ties to the Carey School of Law as well as his commitment to health care reform.

“Mr. Ragsdale has led efforts to improve patient safety, enhance quality of care, and reduce health care disparities at institutions — and for patient populations — nationwide,” Perman said. “He’s like all of us in this room and at this institution: He’s ultimately after the best patient outcomes irrespective of who the patient is.

“He’s also using this unique expertise in his service on a Maryland legislative workgroup creating a ‘Health in All Policy’ framework that can pre-emptively mitigate, reduce, and possibly affect disparate health outcomes.”

In his 60-slide presentation, Ragsdale took the audience on an informative tour through 3½ centuries of Baltimore history, which is something he knows well, being that his family’s roots in the city date back to the 1840s. “I am Baltimore to my core. I go away, but I always come back,” he said.

Of course, the city’s history is closely tied to the state’s, and Ragsdale discussed how in 1638, the Maryland Colony Council issued an edict stating, “Neither the existing black population, their descendants, nor any other blacks shall be permitted to enjoy the fruits of white society.” The Maryland Doctrine of Exclusion was written to ensure that African-Americans would remain a “subordinate, non-competitive, and non-compensated workforce,” he said.

Using another slide, Ragsdale pointed out that as a port city, Baltimore was heavily used in the slave trade, despite being in Maryland, a free state. Ships holding slaves for sale would dock in the Inner Harbor, and about a half-dozen slave-selling shops were located between the harbor and Howard Street.

As Baltimore’s population steadily grew after the Civil War and then into the 1950s, systemic discrimination also reared its ugly head in the areas of banking, education, and housing. In fact, as white populations moved out of the city and into the suburbs beyond what is now the Baltimore Beltway, they implemented restrictive covenants to prevent houses from being sold to African-Americans, Jews, and Catholics. “That was a real show-stopper,” Ragsdale said.

In the education realm, Ragsdale recounted Baltimore’s history of segregation, unequal opportunities, and achievement gaps along racial and socioeconomic lines. He also lamented a school-to-prison pipeline in Maryland, noting that spending on prisons rose twice as fast as spending on schools between 1980 and 2013. The pipeline is particularly robust in Baltimore, he said, because of its high rates of unemployment, crime, and poverty.

“I have to remind folks that education is not a zero-sum game,” Ragsdale said. “As suburbanization happened, white people moved into their new communities and built brand new schools, and that furthered the disparities in education.”

On another front, Ragsdale discussed the way African-Americans were excluded from academic research and technical education in the field of health care and how the number of black-only medical schools was systematically reduced from 12 to two from the late 1800s to early 1900s. He pointed to a number of laws that addressed discrimination in health care, such as the Hill-Burton Act of 1946 and Title VI of the 1964 Civil Rights Act, but he said that none addressed health disparities tied to race until the Affordable Care Act of 2010.

More generally, regarding the city’s health care history, Ragsdale said, “Baltimore has been a sick, sick city for a really, really long time. There’s been one public health disaster after another. Yellow fever outbreaks in 1794, 1797, 1798, 1799, 1800, 1808, and 1819, several outbreaks of smallpox in the 18th and 19th centuries, and other assorted epidemics.”

Ragsdale noted that he was talking to an audience composed of many people involved in the health sciences, and he asked those who practice health care or formulate policy to think about the history of racial inequality in the city and the state as they move forward in their careers.

“I wanted to give you an introduction to what was intentionally done to create disparate lanes of economies in Baltimore,” said Ragsdale, who answered audience questions after his presentation. “One of those different lanes is health, your ability to go out and live and survive. That was bifurcated in Baltimore.

“So I encourage you to ride with me on this journey. Make this your first and not last engagement with this type of work. And if you’re in a leadership position, make sure that you reflect on this work and our history when you’re making decisions.”