The University of Maryland, Baltimore (UMB) CURE Scholars are off to a busy start this school year with new curriculum tracks, extensive writing and math programs, a new location for after-school learning, and even a fun science program as part of the Maryland STEM Festival.

Twenty-six sixth-graders from three schools in West Baltimore joined the Continuing Umbrella of Research Experiences (CURE) Scholars Program in a ceremony Oct. 14 when they received their white coats, a symbol of their entrance into the field of health care. The new scholars have joined 54 seventh- and eighth-graders who all meet three times a week for tutoring, mentoring, instruction, and hands-on learning to set them on a path toward a career in health care or research.

“The main goal of the program is to create a science pipeline for under-represented minorities, to expose students to health care careers, and excite younger students about all the possibilities in health care,” said UMB CURE Executive Director Robin Saunders, EdD, MS. 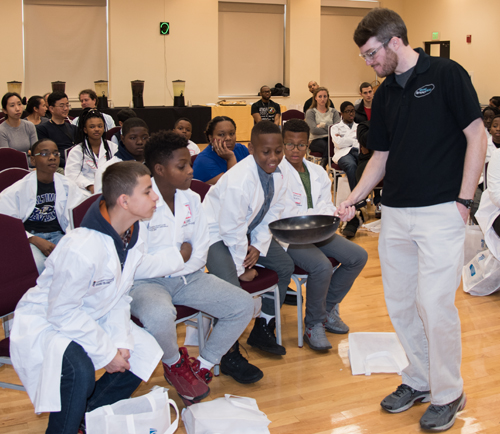 Sixth-graders in the UMB CURE Scholars program check out how quickly liquid nitrogen evaporates at a Maryland STEM Festival event put on at the University by the Maryland Science Center.

“In addition to their research on cancer health disparities, scholars will also explore a wide array of topics in science and technology,” explained Lauren Kareem, MEd, assistant director and curriculum coordinator for the CURE Scholars Program. “Our scholars have many interests in the field of STEM [science, technology, engineering, and math].”

After an overview of the three curricula, the scholars were asked to write an application for their top choice. They already have started dissecting sheeps’ eyes, programming robots, and building bridges, according to TaShara Bailey, PhD, MA, diversity fellow and PROMISE director.

Throughout the year, the scholars in each curriculum will work on specific research topics, Kareem explained. Anatomy students will continue researching cancer health disparities and will draw from the students’ research last year. The robotics students will study artificial intelligence, self-driving cars, and automation. The MESA students will focus on renewable energy, solar-powered cars, and computer coding. All the scholars will write a research article, to be published together in a journal at the end of the year. They also will create posters similar to last year that they will use in a culminating presentation in April, Kareem said.

Instead of meeting at their individual schools Tuesday and Thursday afternoons, this year the students are being transported to the Baltimore City Community College Life Sciences Institute at the University of Maryland BioPark for their training with the nearly 250 UMB CURE mentors. On Saturdays, the students meet at the University of Maryland School of Pharmacy to take part in A Bridge to Academic Excellence, where they receive tutoring as well as other instruction.

Writing and math are a big focus for the scholars this year — especially the eighth-graders. The UMB Writing Center has held workshops to help prepare the students for the college application process with a particular focus on writing an essay, said Isabell May, PhD, director of the writing center.

On a recent Saturday, James E. Wright, MFA, a multilingual writing specialist with the UMB Writing Center, helped the scholars to understand the power of writing and the impact it could have on their lives.

“Writing is about you, creating your own story for people who don’t know you,” he explained. “These essays are going to go out to college admissions committees, the people who make decisions about who to give scholarships to. … You choose what story you want to tell. … You are never too young to start thinking about what story to tell.”

For math instruction, eighth-graders are taking Kaplan math every Saturday to help prepare them for the PSAT, and the younger scholars are taking IXL math — an online math tutorial.

“In sixth and seventh grade, we are enhancing their math skills because some are pretty low,” said Edana Jackson, CURE office manager and program coordinator. “To be competitive when they get to high school, they need to be at least in Algebra I if not Geometry.”

On a recent Saturday, all of the sixth-grade scholars and many of the seventh- and eighth-graders put on their white coats and gathered on the third floor of the Southern Management Corporation Campus Center for a program on liquid nitrogen. “It’s Cool in Your School” was put on by the Maryland Science Center as part of the Maryland STEM Festival, and a few community members also were in attendance. (See the Photo Gallery)

The students were riveted by the show. Science Center educators created clouds in the room by pouring water into liquid nitrogen, deflated balloons by dipping them in the sub-zero liquid, and even passed around marshmallows that had been frozen by liquid nitrogen for the children to taste.

“It was a great learning experience,” said Demari Smith, a sixth-grade CURE Scholar from Southwest Baltimore Charter School. “My favorite part was the marshmallow and how smoke came out of your mouth when you ate it.”

Smith said he applied to be a CURE Scholar because he heard it would open doors for him. His cousin, Damonte Shields, also is in the program. Smith has not been disappointed.

“It’s better than I thought it would be. We are actually jumping into projects and designing bridges,” said Smith, who is in the MESA curriculum.

“I think it’s amazing,” she said. “Last week we dissected a sheep’s eye, and I thought that was really cool.”

Faw is looking forward to more dissecting and learning about the human body.

“I might want to become a doctor,” she said. “That’s what I’m hoping.”