While many of us are waiting for a dose of a COVID-19 vaccine, a good portion of folks have a dose of skepticism about the shots — the question is if it’s a healthy one. 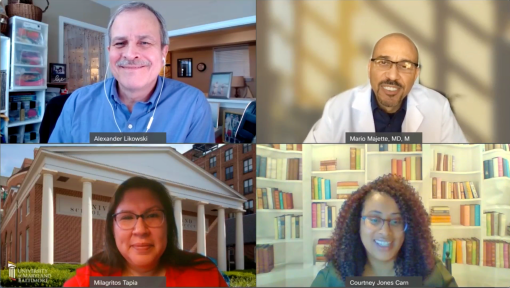 Experts from the University of Maryland, Baltimore (UMB) helped UMB faculty, students, and staff sort through their concerns to help them understand if the COVID-19 vaccine is right for them during a forum March 10 titled “Should I Get the Shot? A Community Conversation.”

A healthy dose of skepticism is good to have, but we have to educate ourselves to be aware when skepticism bleeds into conspiracy theory territory, said Mario Majette, MD, MPH, clinical instructor, Department of Family and Community Medicine, and director of student and employee health at the University of Maryland School of Medicine (UMSOM).

“Mistrust is healthy in most cases as long as it really doesn’t go a little too far,” Majette said.

The comment centered around mistrust that some people shared about Johnson & Johnson, the maker of one of the three COVID-19 vaccines that have received emergency use authorization from the Food and Drug Administration (FDA), because of its widely publicized talcum powder lawsuits, said Courtney Jones Carney, MBA, executive director, intercultural leadership and engagement, and director, UMB Intercultural Center, which hosted the virtual event. If people don’t have a choice of vaccine, it creates an apprehension for some people knowing they might be given the Johnson& Johnson shot, she said.

Majette pointed to the fact that there might be cases anyone can point to at different pharmaceutical companies that people could take issue with unrelated to the research, review, and approval of COVID-19 vaccines.

However, it is important to acknowledge and explain the cases of historical mistrust of medical studies and access in minority populations because of the Tuskegee Institute syphilis study (formally, U.S. Public Health Service Study of Untreated Syphilis in the Negro Male in Macon County, Alabama) and the cancer cells used from Henrietta Lacks without her knowledge or approval, Majette added. Ethical and human subject protection measures have since been reformed to avoid taking advantage of minority populations in scientific studies — but these measures are not a cure-all for equity and preventing all instances of unethical behavior. The available vaccines are safe and effective for all races, according to the clinical trials research.

“If you weren’t questioning, that’s probably worse than accepting things because there’s been a lot of history. With that said, there’s nothing that I’ve seen and no evidence whatsoever that this vaccine isn’t good for people of color,” Majette said.

Milagritos Tapia, MD, professor, Department of Pediatrics, UMSOM, and infectious disease specialist, Center for Vaccine Development and Global Health, addressed the misunderstanding of messenger RNA’s (mRNA) role in the vaccine. Tapia was sent a Natural News article from an audience member to examine that circulates a falsehood stating that mRNA will suppress the proteins that fight cancer; mRNA codes for proteins for specific functions, so they’re all different.

“mRNA is just a word,” Tapia said. “It’s like pants. All pants are different. Some pants are short pants, some pants are long pants. It’s like somebody saying to you, ‘Pants cause cancer.’ What kind of pants? What do these pants look like?”

Beyond battling mistrust, often via misinformation, having facts to weigh against each other is tricky if you don’t know what to do with them. Interpreting rates and numbers against other vaccines is a slippery slope because the vaccines were tested in different populations during different points of the pandemic. The comparison can be deceiving.

“There’s not comparing apples to apples. It looks like you are because they’re numbers, and math is math. One number is bigger than another number,” Tapia said.

The vaccines overwhelmingly prevent hospitalization and death, she added.

The public is widely encouraged to get the first available vaccine offered to them when they are eligible according to their local criteria, but there are some factors that could prompt a brief delay in getting the shot and some information that needs to be weighed.

Pregnant women and new mothers are just two of those groups that have decisions to make. Admittedly, an answer for breastfeeding mothers is tough to give a definitive yes or no, Majette said, because clinical trials and additional studies have not been completed on those populations. However, in the course of trials, women have become pregnant while getting a vaccine.

“The consensus is, in general there’s been no relation between the vaccine and nursing mothers. There’s been very little evidence that the vaccine has an effect on pregnancies,” Majette said.

Tapia keyed in on the technology of the vaccines to explain why they would be a safe choice for pregnant women.

“How likely is it, based on the way that we know these vaccines work, that there would be any type of transmission to a fetus or effect on a baby being breastfed?” Tapia said. “Based on that science, it is extremely unlikely there would be any effect.”

The Johnson & Johnson vaccine uses a viral vector that is a modified version of a common virus (adenovirus) to deliver an antigen that causes cells to make the SARS-CoV-2 spike protein. Once the body starts to produce the spike protein, antibodies are created to fight it. Those same antibodies are then ready to fight COVID-19. The vector does not replicate in the body, Tapia explained.

“If there was any concern about the virus causing a problem for the person receiving the vaccine, it’s not possible based on the fact that the virus does not multiply inside the human body,” she said.

Because there is boundless information — good and bad — out there, the best place to start with discussing the vaccines is with your doctor, Tapia said. Reliable information found on the FDA and Centers for Disease Control and Prevention websites can be difficult to understand, and your doctor can help interpret the information. (Majette also recommended the Mayo Clinic’s website.)

“You should go to your doctor and say, ‘What does this mean?’ ” Tapia said.