In what has become a family-oriented tradition, more than 40 middle school students were joined by parents, a few siblings, and at least one grandparent on March 2 for the UMB CURE Scholars Oral Health Promotion Program at the University of Maryland School of Dentistry (UMSOD).

It was the largest group to attend the winter event since UMSOD students and faculty members began welcoming participants in the UMB CURE Scholars Program and their families in 2017. (View a photo gallery on Facebook.)

For the scholars, the hands-on activities were similar to those at Planet Smilez, a week-long dentistry segment of the summer camp that is offered by the UMB CURE Scholars Program. The founder of Planet Smilez, a nonprofit devoted to oral health education, is fourth-year UMSOD student Kathryn Pawlak, who urged the scholars not only to dream big but to also pay close attention to their oral health. 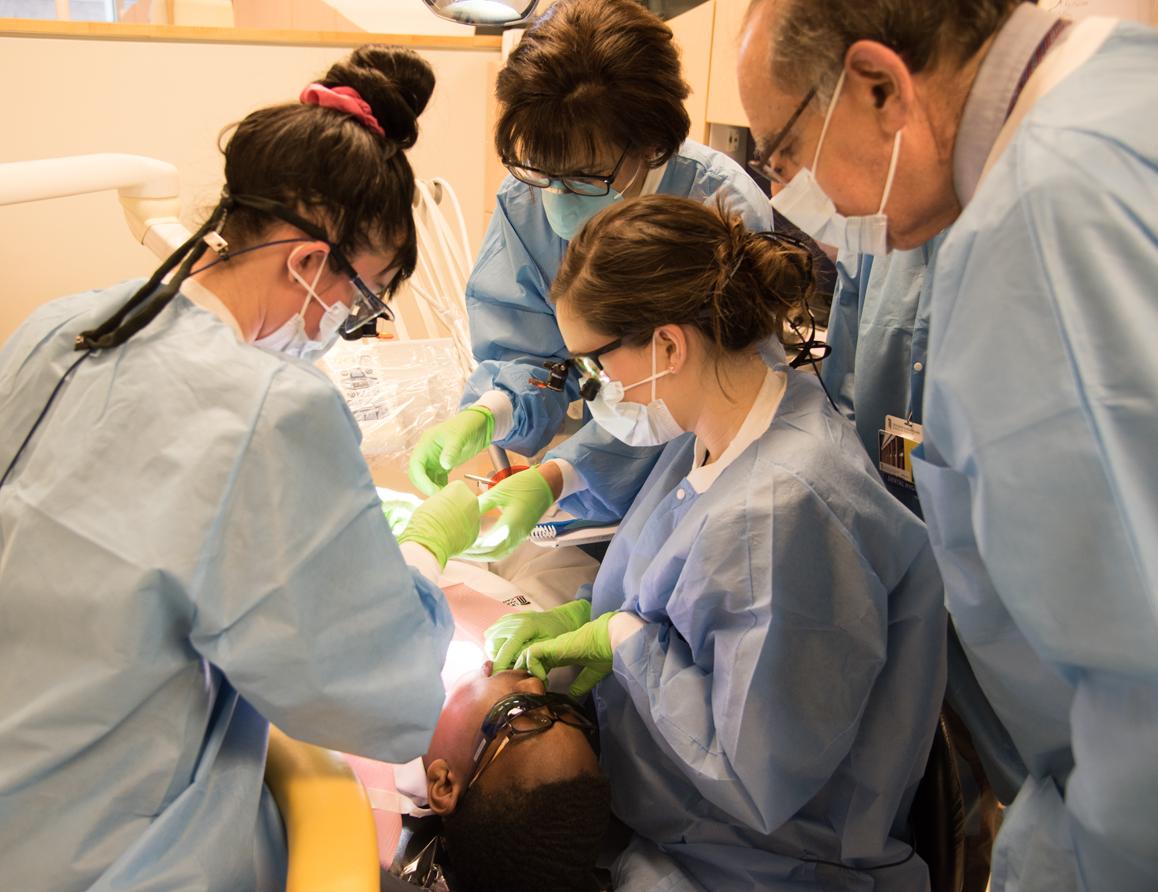 Jay A. Perman, MD, president of the University of Maryland, Baltimore (UMB), congratulated Pawlak for bringing Planet Smilez to UMSOD to benefit the scholars and their families.

“You are a light ... a role model,” he said, calling Pawlak “a shining example” of what highly motivated people can accomplish when they prize their neighbors’ health and well-being alongside their own and when they know how to use both gifts and talents in serving others.

Perman also noted how important it was that the scholars were sharing the experience of learning about oral health with their parents, brothers, and sisters. “When learning is fun and when it’s with your family, I think that’s the best kind of learning — that’s what sticks.”

Describing the scholars as a “very impressive group,” Mark A. Reynolds, DDS, PhD, MA, dean and professor of UMSOD, welcomed the youths to the school. “When I look at you, the UMB CURE Scholars, I know that I am seeing a group of students who are smart, talented, committed, and, most of all, eager to learn,” he said.

The large group engaged in a question-and-answer session as Reynolds called on the scholars, who are in the sixth, seventh and eighth grades at three partner schools in West Baltimore. Family members, including one grandfather, raised their hands, too.

There was a great interest in facts surrounding the prevention of tooth decay given that many of the scholars were about to receive free treatments, while accompanied by a parent. To set the scene, Marisa Rushing, president of the Dental Hygiene Class of 2019, presented a slideshow.

Tooth decay is the single most common chronic childhood disease. Preventive measures include fluoride treatments and dental sealants. The latter are thin plastic coatings applied to the grooves on the chewing surfaces of the back teeth. Most tooth decay in children occurs on these surfaces. Sealants prevent tooth decay by keeping bacteria and food particles out of these grooves.

Among them was Barry L. Cohan, DDS ’74, clinical assistant professor on the Dean’s Faculty and a member of the UMSOD Board of Visitors. He said it’s rewarding for both faculty members and middle school-age scholars to spend time together.

“It’s exciting for them to be exposed to what dentistry’s all about,” he said, adding that exposure to professionals in the field can play an important role in the choice of a career. “It improves their chances of becoming a dentist or maybe a different type of health care provider.”

In conversations, Cohan said, one scholar spoke of becoming a surgeon while another mentioned the possibility of being a woman’s doctor.

And possibilities become realities, he said, recalling his own youth. At 13, Cohan said he started considering dentistry because he admired his orthodontist. “He was very influential.”

The day’s activities gave the scholars plenty of role models to admire. Among them were UMB CURE mentors and UMSOD students Elizabeth Wilcox, Benjamin Levenson, and Gregory Poku-Dankwah, who is this year’s UMB CURE lead mentor. Volunteers included 23 dental hygiene students and 25 dental students, who interacted individually with the scholars by offering advice and demonstrating skills.

In the simulation lab, scholars used real instruments while learning how to excavate dental caries on plaster molds. As a finale, they learned suturing, each threading their stiches on a hot dog in place of a patient.

Green Street Academy seventh-grader Najah Johnson relished the activity. “I already knew how to sew,” she said, “so suturing was easy.”