A young woman was trafficked into the United States from Mexico, tricked into crossing the border under the cover of night. The lure? The quintessential promise of the American dream — a job, a better life, the ability to support her young child. The job that awaited her? Forced prostitution. The woman was thrust into a life of fear, trauma, and cruelty. She was trafficked up and down the East Coast, from New York to the Carolinas. Eventually, she escaped her human traffickers and found her way to help at the University of Maryland Support, Advocacy, Freedom and Empowerment (SAFE) Center for Human Trafficking Survivors.

The harrowing tale was told by Ambassador Susan G. Esserman, JD, founder and executive director of the SAFE Center, during a luncheon presentation titled “Raising the Curtain on Human Trafficking in the United States” at the University of Maryland, Baltimore (UMB) on Feb. 27. (See video below.) 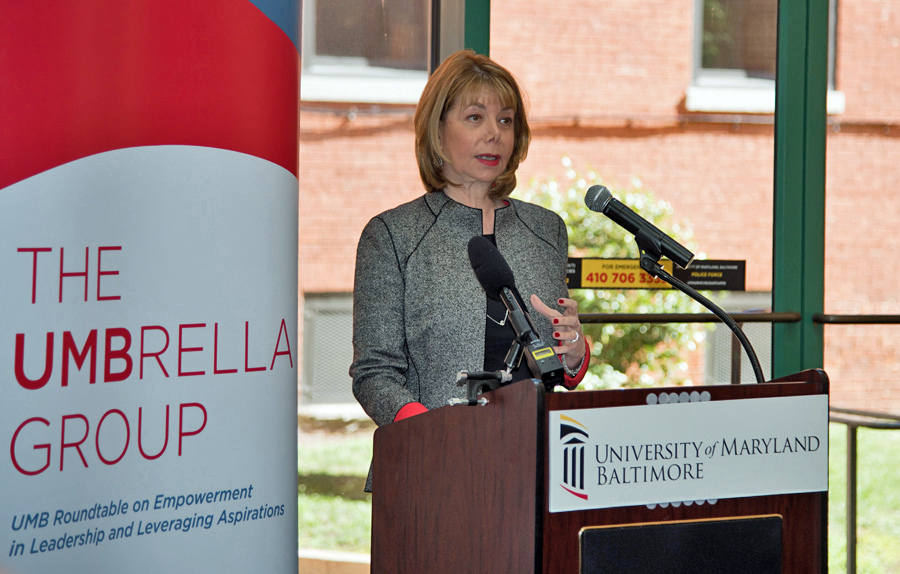 “Sadly, this is not a rare occurrence in the United States,” Esserman said to UMB employees, students, and guests at the Dr. Samuel D. Harris National Museum of Dentistry. “Exploitation like this takes place around us, in communities across the United States.”

The luncheon, hosted by the UMB Roundtable on Empowerment in Leadership and Leveraging Aspirations, also known as the UMBrella Group, began with remarks by UMBrella Group chair Jennifer B. Litchman, MA, senior vice president for external relations and special assistant to the president.

“Human trafficking is one of the greatest human rights violations of our time,” Litchman said “This brutal crime has local, regional, national, and international implications with serious implications for our state and our community. I’m proud that the University of Maryland, Baltimore has undertaken the challenge of human trafficking on such an important and profound level and I’m glad you’re all here to learn more about it and hopefully find ways that we can all work together to stop it.”

"It’s an absolute lifeline to survivors here in Maryland, where, sad to say, human trafficking is a profitable and desperately brutal trade," said UMB President Jay A. Perman, MD.

In introducing Esserman to the more than 100 attendees, Perman praised her efforts in combating human trafficking.

“I cannot imagine anyone more passionate about ending human trafficking, more knowledgeable about how to do it, or more persuasive in getting advocates to sign on to a collective vision and to invest the resources we need to bring help and hope to survivors,” he said.

Esserman is a visiting professor at the University of Maryland School of Social Work. She served in four senior positions in the Clinton administration, including deputy U.S. trade representative with the rank of ambassador.

The number of human trafficking victims in the U.S. is hard to quantify because it is a crime hidden from view and victims are fearful of coming forward, Esserman said. The International Labor Organization estimates 25 million people are trapped in human trafficking. The 2016 Global Slavery Index reports human trafficking occurs in more than 165 countries.

“Twenty-five million is a staggering number,” she continued. “Human trafficking takes place on this scale because it’s an immensely profitable criminal enterprise.”

According to the Department of Justice, human trafficking is the world’s fastest-growing criminal enterprise and the second-most profitable, earning traffickers roughly $150 billion a year in illegal profits, Esserman said. In the U.S., the State Department reports between 14,500 and 17,500 new victims are trafficked into the country each year, and experts estimate that the number of victims trafficked within the U.S. reaches into the hundreds of thousands, she said.

The Baltimore-D.C. metro area has a particularly high rate of human trafficking because of its location along the Interstate 95 corridor and its access to airports and other transportation hubs, Esserman said.

“We founded the center with the goal of restoring dignity and human rights to sex and labor trafficking survivors,” Esserman explained. “We saw that survivors faced fractured services that were often so difficult to access and that their needs are manifold. Survivors long battle memories of trauma and struggle to regain their footing. They often have no means to support themselves or their family.

“So, in response, the SAFE Center provides and coordinates comprehensive services to human trafficking survivors, recognizing that a multidimensional, trauma-informed, and victim-centered approach is essential if survivors are to have a chance of reclaiming a life of dignity and hope.” Esserman credited SAFE Center Deputy Director Laura Ardito, JD, for “being instrumental in building a strong foundation for the center” since its first day of operations.

The center draws on the combined resources and the wide range of disciplines of UMCP and UMB to address human trafficking. Through in-house services and collaborative partnerships, the center provides direct services to U.S. and foreign-born adult and child survivors of sex and labor trafficking.

Since the SAFE Center opened, more than 50 survivors of sex and labor trafficking have been served.

“I have to say, we were shocked by this number,” Esserman said, noting she expected a much smaller number of victims because they are often fearful to come forward. “We were quite overwhelmed by the need that we saw.”

Next month, services will be expanded to provide after-hours and weekend crisis intervention services, Esserman said

“We have been energized and so impressed by the ideas, passion, and commitment of these students, and, at the same time, we’re very proud to be training a new generation of anti-trafficking professionals,” Esserman said.

In the year ahead, Esserman said there would be a major focus on building an economic empowerment program as part of the business school’s strategic plan.

“Because enhanced education and meaningful job opportunities are vital to restoring human trafficking survivors’ independence, this program is absolutely vital to our vision,” she said.

While progress in combating human trafficking is underway, there still is much work to be done, Esserman said.

“A century and a half ago, shortly before this country abolished slavery by approving the 13th Amendment, Frederick Douglass warned that our battle against this sort of injustice would not end with ratification of the amendment. ‘Slavery has been fruitful in giving itself names,’ he said. ‘And it will call itself by yet another name, and you and I and all of us had better wait and see what form this old monster will assume, in what new skin this old snake will come forth.’ Today, tens of thousands of human trafficking victims live in fear and despair in this great nation. The monster wears a different skin, but make no mistake, this is slavery. And together it is our work to end it,” Esserman said.