In June 2017, JaVon Townsend, MSW ’12, LCSW-C, traveled to Ghana with a friend for vacation, “doing touristy things.” While the University of Maryland School of Social Work (SSW) graduate stayed in the West African nation for only 10 days, it left a lasting impression.  Soon, she will return to Ghana, embarking on a nine-month research project as the recipient of a prestigious scholarship in the Fulbright U.S. Student Program. 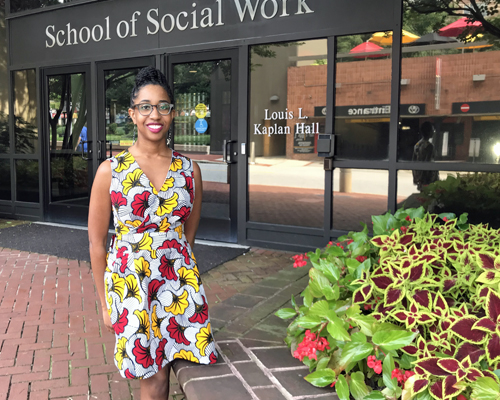 JaVon Townsend, MSW'12, LCSW-C, will travel to Ghana after being awarded a scholarship in the 2018 Fulbright U.S. Student Program.

It is the first time a current or former student from the University of Maryland, Baltimore has been named a scholar in the program, which offers research, study, and teaching opportunities in more than 140 countries to recent graduates and graduate students. Scholars are selected based on numerous factors, including the quality of proposal, academic or professional record, and personal qualifications.

“I was very excited and kind of overwhelmed,” Townsend said of when she learned her application to research early childhood parenting practices in Ghana for nine months was accepted. “It was a major relief.”

There was something about Ghana that seemed special to Townsend, who during her undergraduate studies at St. Mary’s College and since has traveled to numerous foreign countries. “With each of those countries, I enjoyed my stay, but I didn’t have the same sort of feeling of needing to come back right away that I did when I left Ghana,” she said.

Within days of returning from her trip, Townsend decided to apply to the Fulbright U.S. Student Program as a way to return to Ghana. Former SSW faculty members Tanya Sharpe, PhD, MSW, and Susan Roll, PhD, encouraged her to pursue the scholarship and to bring back lessons for her work with young children in Baltimore. Townsend is employed as an inclusion specialist for the nonprofit Abilities Network, which assists individuals with disabilities in Maryland. She works in the organization’s Project ACT (All Children Together) program, which focuses on early childhood development and preventing children from being suspended and expelled from their child-care settings in Baltimore County and Baltimore City Head Start programs.

What was it about Ghana?

“I felt more at home there than I have in other countries that I’ve visited,” Townsend said. “Being black and traveling can be complicated. There are ways I felt welcome there that I didn’t feel welcome in other countries. It felt a little deeper, and easier, just to exist and kind of move around.” In addition, she found the Ghanaian people to be very friendly and have an easygoing approach to life.

“Those are things that I am always trying to build into my work as far as therapeutic practice with children and adults. Life is not super easy in Ghana, just like life is not super easy here, but there are ways that people (in Ghana) have kind of figured out how to live and accept that I am interested in exploring more of,” Townsend said.

Townsend also was intrigued by the history of Ghana, which gained independence from the United Kingdom in 1957. At the same time, the civil rights movement was underway in the United States.

The Fulbright application was filed in October 2017. In January 2018, she learned she had made the first round of cuts and that her application would be sent to the host country for review.  Un April, an email arrived stating she was selected as a Fulbright scholar.

Born in Akron, Ohio, to a single parent in the Navy, Townsend grew accustomed to moving around a lot. Her elementary years were spent in Alexandria, Va., a community abundant in diversity. “I was exposed to a lot of international cultures. It was a really nice way to grow up,” she said. In her spare time, she read about faraway places in an encyclopedia set bought by her mother.

As an undergraduate, Townsend studied education, with the ambition of becoming a Spanish teacher but eventually learned that being in a classroom day in and day out was not for her.

“I ended up doing social work as a way to support education, because I still cared a lot about education,” she said. Townsend was particularly interested in the Harlem Children’s Zone, a nonprofit organization for poverty-stricken children and families in Harlem and the model upon which SSW’s Promise Heights initiative is based. “I saw that the Harlem Children’s Zone hired MSWs, so I applied for social work school.”

SSW Dean Richard P. Barth, PhD, MSW, was excited to learn of Townsend’s scholarship award and remembers her as “an exceptionally strong student and individual.”

“I am very proud to know that JaVon has been recognized with this Fulbright award,” he said. “She has been working as a clinical social worker and inclusion specialist ensuring that young children having difficulty in early childhood education are getting back on track. She will be a great colleague and asset to those she engages with in Ghana.”

Bonnie Bissonette, MA, EdD, director, education abroad and international safety at UMB's Center for Global Education Initiatives, agreed with Barth’s assessment. She is one of nearly 1,600 volunteer advisers on campuses nationwide who assist in the recruitment of Fulbright scholars.

“Ms. Townsend is a personable, upbeat young woman with positive self-motivation and initiative,” Bissonette wrote in an evaluation form required of all applicants. “She has determination and drive that are true assets, with a calm, pleasant demeanor. Her genuine selflessness (in her choice of career and life goals) stand her in good stead for representing the U.S. and the Fulbright program.”

“Townsend is focused on improving lives and recognizing that U.S. children of color may benefit from techniques and approaches of African communities, and she saw an opportunity to explore the idea through Fulbright,” Bissonette’s evaluation continued.

After Townsend’s first trip to Ghana, she began reading up on childrearing there and realized the dearth of data-driven information, Bissonette said. Townsend’s work in the field of social work, experience traveling overseas, and stellar academic record made her an ideal candidate for the Fulbright award, Bissonette said.

Meanwhile, as her August departure nears, Townsend is eager to begin her research on strengths-based childrearing practices in Ghana.

“A lot of research I’ve encountered about blacks in the U.S. is deficit-based, meaning it focuses on what aren’t they doing or what are they doing wrong. Most of the interventions that are taught and practiced widely are developed and based in white middle-class norms,” she said. “We are constantly going into oppressed communities and saying, ‘Where are they lacking?’ But that doesn’t build us up at all, and, in some ways, it perpetuates these ideas of us being inferior or the way we do things is not valid.”

Townsend said she wants to learn about the things people in oppressed communities are doing right.

“I think here (United States), the way that we have raised children has been largely impacted by things like oppression and slavery because we had to survive, and so there were things that we kind of adapted that we might not have done if we didn’t have those things in our history,” she said. “In Ghana, they still have a close connection to their actual culture even though they’ve been colonized. And I find that to be really beautiful.”

“I thought 'typical trajectory.' Now I am even more open to learning in different places and in expanding my own work to more than one location, which is not at all what I would have expected for myself,” she said. “I’m excited to bring something back to Baltimore.”