Monica Lewinsky, MS, is working hard as a social activist in the battle against cyberbullying and online harassment. She’s come a long way from the 24-year old intern who became known to the public in 1998, when it was revealed that she had been involved in an intimate relationship with then-president Bill Clinton. Overnight she was dragged unwillingly from being an unknown private citizen to the humiliation of a global public stage where she became patient zero for online harassment. 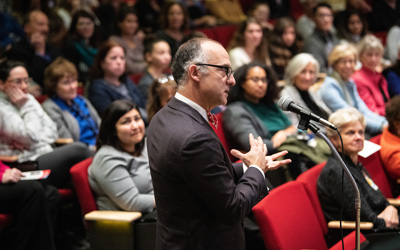 On Nov. 19, Lewinsky shared her story as part of the UMB Roundtable on Empowerment in Leadership and Leveraging Aspirations (UMBrella) Speaker Series at the MSTF Leadership Hall at the School of Medicine. Gesturing to a crowded auditorium, Jennifer Litchman, MA, senior vice president for external relations and UMBrella chair, marveled, “In my 20 years at UMB putting on dozens of events, we’ve never had such a response to a speaker.” She continued, “I think it’s a testament not only to the subject, but to our speaker.”

As Lewinsky took the stage, she noted, “When this happened to me 21 years ago, we had no name for it. Today we call it cyberbullying, online harassment, and slut shaming.”

Describing herself as a modern-day Hester Prynne, the fictional character condemned with a scarlet letter, Lewinsky explained the pain of the Starr investigation and the following years of worldwide public humiliation fanned by the flames of the World Wide Web.

“The attention I received was unprecedented,” she said. “I was publicly stoned with gossip, innuendo, satire, caricature, malice, and vitriol. I was called a tramp, a tart, a slut, a bimbo, a floozy, and of course ‘that woman.’ I was slut shamed, fat shamed, marginalized, and objectified.”

It was a difficult period in her life, and her parents watched her closely. They sat by her bedside. They made her shower with the door open. They were afraid of something Lewinsky said she never tried, but in the depths of her trauma considered; suicide.

Fast-forward to 2010, when news broke that Tyler Clementi, an 18-year-old freshman at Rutgers University, had jumped off the George Washington Bridge after a video of him being intimate with a man went viral. Clementi’s death became a turning point for Lewinsky as she realized the glaring headlines that exposed her were actually a blessing.

“My parents knew what I was going through, but today too many have learned of their child’s suffering too late,” she said. “I began to look at the world around me and to understand that we’re living in this world full of online harassment and cyberbullying” that had exploded exponentially since 1998 with the arrival of Facebook, Twitter, and Instagram.

Then, in 2014, Lewinsky opened up to the public in a Vanity Fair essay titled “Shame and Survival” in which she shared her personal experience and the shift toward what Sarah Lawrence College professor Nicolaus Mills calls a “Culture of Humiliation.” It was the start of a process Lewinsky described as “taking back my narrative and giving a purpose to my past.”

Since then, she has been on the front lines of the anti-cyberbullying brigade. She is a sought-after speaker whose TED Talk, “The Price of Shame,” has been viewed close to 7 million times. She is an anti-bullying ambassador to Bystander Revolution in the United States and the Diana Award in the United Kingdom. She also is on the advisory board for Project Rockit and a founding board member of the Childhood Resilience Foundation.

With her darkest days behind her, Lewinsky sees herself as a beacon of light, determined to help others navigate the murky depths of the internet. Healing begins with empathy, according to Lewinsky. “I’ve seen some very dark days in my life, and it was empathy and compassion from my family, friends, and sometimes even strangers who helped save me,” she said.

She encourages people to exert what social psychologists call “minority influence” as online consumers. By speaking up when we see cyberbullying occurring, we become what Lewinsky calls an “upstander” instead of a bystander. If someone is being harassed, “send them a private comment or report the situation,” Lewinsky urged, adding, “help lead someone back to their dignity.”

When asked why she decided to speak out, Lewinsky said, “It’s not just about saving myself. Anyone suffering from shame and public humiliation needs to know one thing: You can survive it.” She tempered her message of hope with a dose of reality. “It may not be painless, quick, or easy,” she said. “But you can insist on a different ending to your story. We all deserve compassion, both online and off.”

Erin Giudice, MD, associate professor and director of the Pediatric Residency Program at the School of Medicine, left the talk armed with ideas that can help in her personal and professional life.

“Cyberbullying is an important issue for us all to know more about,” said Giudice, who is a member of the UMBrella Advisory Board. “Whether we’re talking about our own children or people we’re interacting with in a professional way, it’s important we have the tools to help navigate these online situations with more empathy and compassion."