Inside the Mind of a Best-Selling Author

“I got bad news for you, kid. You’re a writer and you’ll never shake it.”

Those words were imparted to Alice McDermott by a professor when the best-selling author was a college freshman. She had submitted her first assignment for her first writing class, “The Nature of Non-Fiction,” taught by a retired Air Force colonel and former journalist. The homework: Write an autobiographical essay. 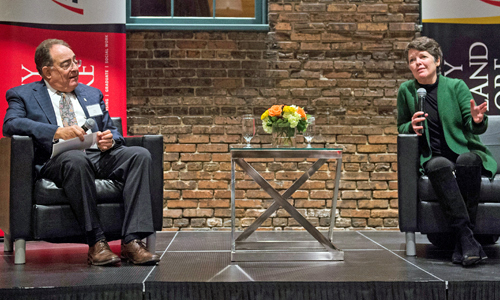 University of Maryland, Baltimore President Jay A. Perman, MD, and award-winning author Alice McDermott share a conversation before an audience of UMB alumni.

“I went to my dorm room and wrote an autobiographical essay that was completely manufactured,” McDermott said, sharing one of many stories during “An Evening with Alice McDermott,” a conversation between the author and University of Maryland, Baltimore (UMB) President Jay A. Perman, MD, on Nov. 29 at The Winslow, an event venue at the Parker Metal Building on West Ostend Street, held for 150 UMB alumni and their guests.

McDermott’s professor kept her after class, at which point he issued his bad news. “It was that moment, yes, of course, I always knew that I wanted to be a writer, but I would not have known it if he hadn’t have told me.”

The University president shared a stage with McDermott as he asked her questions about her writing methodology and inspiration.

McDermott is the author of eight novels, including her latest, The Ninth Hour, which was a finalist for the 2017 National Book Critics Circle Award and the 2017 Kirkus Prize for Fiction. Audience members received signed copies of the book.

Three of McDermott's novels have been finalists for the Pulitzer Prize, and her best-known work, Charming Billy, won the 1998 National Book Award.

Born in Brooklyn, N.Y., McDermott was inducted into the New York State Writers Hall of Fame in 2013. She is the Richard A. Macksey Professor for Distinguished Teaching of the Humanities at Johns Hopkins University, a role that gives her opportunities to guide young writers in the way she was guided by teachers.

“I have my career because I had wonderful teachers,” McDermott said. “There's no question in my mind that I could not have embarked on those long nights and days as a writer if I hadn't had teachers who at the right stage of my career told me I was doing the right thing.”

At the beginning of the evening, Perman reminded McDermott that UMB is a health, law, and human services university. “It’s hard science. It’s the facts surrounding law. So, when we're with you, we’re sort of awed by your creativity,” he said. “So, we want to learn a little about you. Was it always writing for you? When did you know you wanted to be a writer?”

McDermott said she started writing at a young age as a way to have a voice in a world where she could complete sentences without being interrupted by her brothers, adding that scientists, lawyers, and writers share some common traits.

“In some ways, I think what inspires a young person to go into the sciences, to go into law, and to go into the creative arts is a kind of curiosity about the world and how it works, what it is to be human, what our short time here on this planet means,” she said. “I think scientists and people in the medical profession ask the same and I think people who go into law ask the same. For me, I think writing was always my way of thinking about the world and making some kind of sense of it.”

Perman also asked McDermott about whether she works on her craft on a daily basis.

She gets behind her desk in the morning and stays until 5 or 6 p.m. It can be boring, lonely work at times, she admitted. “I may not produce anything worth reading over the course of a day. I may end up with a deficit of pages. But I’m there, pursuing it. I need to be there to discover the right way to tell those stories.”

And like many writers, the tight grasp of procrastination often gets in her way, she acknowledged. “I love to procrastinate,” McDermott said. “I'm delighted by not doing what I'm supposed to be doing.”

Many of her novels center on stories about Irish-American Catholic families, Perman noted. “Why is that important to you?” he asked. “Does having that history, those experiences, make the writing process easier?”

“The Irish Catholic experience makes its way as a subject into many of my novels,” replied McDermott, a second-generation Irish-American who attended Catholic schools. “But I don’t think of myself as someone who is setting out to, in any way, define that face or that demographic. In some ways, I think of this as a means to an end. It is material at hand for me.”

Currently, she’s been commissioned to write a play, she told the audience.

“That’s been sort of a fun exercise. I’m not a playwright. I know what happens to novelists who think that they are. It doesn’t go very well,” she said. “But it’s another way of thinking about storytelling, so perhaps it will make me a better novelist in the long run.”

Suzanne Price, MSW ’92, said she is delighted that UMB has been including prominent authors in its alumni events.

“I think this is the best thing UMB could do,” she said. “It is wonderful to hear the authors talk about the creative process.”

Price brought along her sister, Pat O’Hara, an English teacher at Loyola Blakefield in Towson.

“I can’t wait to tell my students all about this tomorrow,” O’Hara said. “I just can’t wait.”