The patient, a 35-week preterm infant whose mother delivered rapidly, had a fever at the time of delivery, turned blue, and was not breathing. 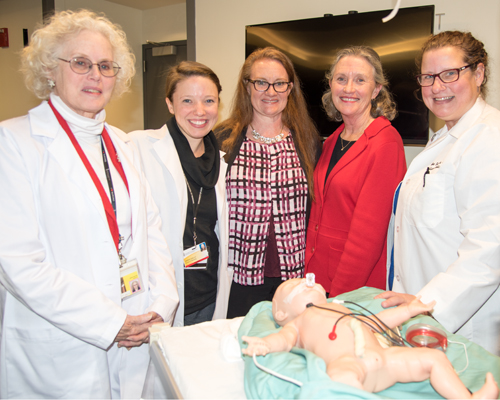 With an audience of about 50 onlookers, the trio was able to stabilize the baby, in reality a lifelike manikin that helps nursing students learn about critical medical situations in UMSON’s simulation labs. The manikin has the ability to turn blue, cry, move, breathe, have a heart rate, and receive invasive treatments.

“These abilities provide realistic responses to the nursing students as they either correctly or incorrectly provide care to the newborn in the simulation setting,” said Amy Daniels, PhD ’18, MS ’12, BSN ’89, RN, CHSE, UMSON assistant professor and director of the school’s clinical simulation labs.

“The technology in the sim lab allows the scenario to progress without interruptions, thereby supporting a more realistic learning experience while remaining in a safe and supportive environment,” she said after the demonstration.

Daniels explained the importance of simulated scenarios such as these to an audience of faculty, staff, students, alumni, donors, and other guests who gathered at the school Dec. 6 for the Debra L. Spunt Clinical Simulation Labs 20th Anniversary Celebration.

UMSON Dean Jane M. Kirschling, PhD, RN, FAAN, welcomed the audience and provided an overview of the school’s “pioneering history in the use of clinical simulation as a component of nursing education,” she said.

“First, it is easy to be impressed by the ‘gee whiz’ technological marvels of modern simulation: babies that can turn blue, manikins that you can intubate, surgical wounds that can hemorrhage, heart rates that can suddenly go awry, and other technical feats,” Kirschling said. “But, as we always try to impress upon those who come to visit and tour our labs, it is important to understand that clinical simulation experiences are not just technological marvels. They are integrated into the overall curriculum for both entry-into-practice and advanced-practice programs. Simulation experiences are also used to allow seasoned nurse practitioners to develop new skills and expand their abilities — an important function given the rapid pace of change in the clinical environment.”

Simulated experiences can replicate care in a variety of clinical settings, such as a pediatric unit or an operating room. The goal is to help learners build competency and confidence, clinical skills, and decision-making abilities without the potential for compromising patient safety, Kirschling said. Simulation also allows students to experience rare and critical events that they may never see during their nursing education but may experience in their careers as nurse clinicians.

The School’s current simulation labs were opened as part of the $38 million, 154,000-square-foot new School of Nursing building in 1998, but the School of Nursing was a model of clinical simulation education for other nursing schools beginning in the 1990s, when former Dean Barbara R. Heller, EdD, RN, FAAN, professor emerita, placed an emphasis on the school becoming a leader in creating safe simulated learning environments, Kirschling explained. Patient acuity was increasing in the hospital setting, and in response to this UMSON opened a $138,000 “mini hospital” for undergraduate students in 1990 in now-demolished Whitehurst Hall. The labs included a critical care unit that allowed students to practice advanced procedures in the same way they would in an actual hospital setting.

“It was a true trailblazer,” Kirschling said. “As the plans for the current building were developed, Dean Heller ensured that there would be sufficient space for a dramatically expanded clinical simulation program.”

With the arrival of Dean Emerita Janet D. Allan, PhD, RN, FAAN, in 2002, the labs continued to grow and thrive. In 2004, when UMSON opened its new simulated operating room, the total number of sim labs was 24 — the most of any school of nursing in the nation. The operating room joined other labs already in place, including labs for neonatal intensive care, pediatrics, adult critical care, and community/home care.

The UMSON clinical simulation labs at the University of Maryland, Baltimore and at the Universities at Shady Grove were overseen by Debra L. Spunt, DNP ’07, MS ’83, BSN ’79, RN, FAAN, an assistant professor who served on the UMSON faculty from 1984 to 2007. She directed the clinical simulation labs from their opening in 1998 until her death in 2007 at the age of 50. Under Spunt’s leadership, the National League for Nursing described UMSON’s labs as “the preeminent nursing student learning labs in the world.” After Spunt’s death, the school named the labs in her memory and established the Debra L. Spunt Clinical Simulation Practice and Research Endowment, which allows UMSON to remain on the cutting edge of simulation education.

“Although we continue to build on our legacy, we certainly cannot and do not rest on it,” Kirschling said. “Our clinical simulation program and its place in our curriculum is continually evolving and we are always responding to new opportunities to demonstrate national leadership.”