Progress in the Fight Against Child Trafficking

Maryland has made significant progress in combating human trafficking, but there is much more work to be done, according to experts and panelists who attended a recent conference hosted by the University of Maryland School of Social Work (UM SSW).

“We need to make sure that you all know more about what is going on with human trafficking in our state so that you all can start to respond and spread the word about what needs to be done,” UM SSW Research Assistant Professor, Nadine Finigan-Carr, PhD, told an audience of 350 at the Maryland Child Trafficking Conference: Moving from Awareness to Response, held Dec. 4 at Towson University. UM SSW hosted the statewide conference in collaboration with the Governor’s Office of Crime Control and Prevention and the Maryland Human Trafficking Task Force (MHTTF).

“The title of this conference was not chosen lightly,” continued Finigan-Carr, who is also director, Prevention of Adolescent Risks Initiative, and assistant director, Ruth H. Young Center for Families and Children. “Moving from awareness to response is really what we want. We need to do more than know human trafficking exists. We need to be able to respond, because the children that we serve, the youth that we serve, the citizens here in our state deserve us to be better, to do better.” 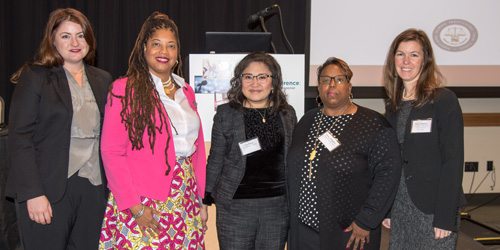 Since UM SSW’s founding 56 years ago, its faculty has been applying science and practice to understand and redress social problems, UM SSW Dean Richard P. Barth, PhD, MSW, said in his welcoming remarks. “None of our work is more important or innovative than our work on human trafficking, which is taking shape in three ways,” he said. The school’s initiatives have led to:

A 2016 study by the Center for Court Innovation estimated between 4,457 and 20,995 13- to 17-year-olds are involved in the sex trade in the United States. In Maryland, between July 2013 and June 2017, more than 350 cases of suspected child sex trafficking were reported by local departments of social services statewide.

In recent years, the general public has become more aware of human trafficking because of popular movies and television shows such as Taken, Law and Order, and American Crime, Finigan-Carr said. “However, for those of us who work with children and youth who have been victimized by trafficking, we know that the issue is much more insidious than the glitz and glamour of Hollywood paints it to be,” she said.

Child victims of trafficking are recruited, transported, transferred, harbored, or received for the purpose of exploitation, Finigan-Carr continued, noting they may be forced to work in sweatshops, on farms, in traveling sales crews, in restaurants, hotels, brothels, or strip clubs, or for escort or massage services.

In Maryland, “after nearly a decade of hard work, there is more work still to be done,” Finigan-Carr said. “Child and youth victims are often misidentified or not identified at all. They encounter professionals lacking knowledge about human trafficking and who are unable to access specialized services. This conference is one step toward changing this.”

“These are the people who are doing the very difficult work on the ground every single day, so their insight to you is invaluable,” she told conference attendees.

Other speakers included Maryland Assistant U.S. Attorney Ayn Ducao, who chairs the MHTTF and said when she started prosecuting human trafficking cases, she focused on the wrong questions.

“I focused on the question of ‘Why does the victim stay? Why didn’t she leave? Why doesn’t she seek help?' ’’ Ducao said. In her first human trafficking case, the "she" was a 14-year-old sex trafficking victim.

“I came to realize those are the wrong questions to be asking,” she said. “You don’t ask a robbery victim, 'Why did she let herself get mugged?’ We shouldn’t be asking the human trafficking victim. 'Why do you let yourself get trafficked?' as if that victimization was her choice."

Ducao recalled a domestic violence awareness poster she had once seen in college with the message, “The question is not why does she stay? The question is why doesn’t he go?”

The 14-year-old victim is now a human trafficking survivor enrolled in college.

“I think we have done much in Maryland to be proud of in terms of the work that we’ve been doing to combat human trafficking,” Ducao said.  “But of course there is so much more work to be done. Let’s go to work.”