Nursing Grads Urged to Be Sources of Healing, Hope

On a community health rotation as a nursing student, Marla T. Oros, MS, BSN ’84, RN, was assigned to a West Baltimore home health agency, which provided home visiting support for patients and families. Her first patient: a 3-month-old child with a failure-to-thrive diagnosis, born to a 15-year-old single mother in an abusive relationship, living in a heatless one-room apartment. 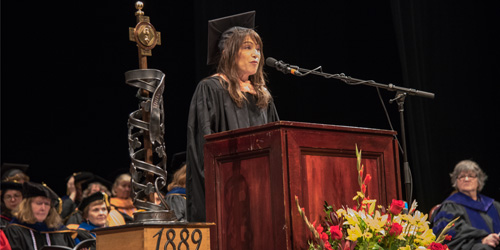 Oros’ experience with that family helped lay the foundation for a career in public health and taught her several lessons she continues to follow 30 years later. Now president of Mosaic Group, a management-consulting firm with expertise in community health, Oros shared those lessons as the keynote speaker at the University of Maryland School of Nursing's (UMSON) Dec. 18 commencement ceremony at the Hippodrome Theatre.  A similar ceremony was held Dec. 15 for UMSON graduates at the Universities at Shady Grove, featuring keynote speaker Joan Vincent, MSN, MS, RN, NEA-BC, vice president of patient care services and chief nursing officer, Adventist HealthCare Shady Grove Medical Center.

It was Oros’ job to weigh the baby each visit and to bring the mom, who was having trouble bonding with the child, to pediatrician appointments. The nurse and a social worker also helped the woman and child move into a better apartment.

“The truth is, I don’t really know whether this story eventually had a happy ending,” said Oros, who previously served as associate dean for clinical practice and service at UMSON.

“What I do know is that while that baby’s mom learned from me, I learned much more from her.”

Oros, a UMSON Visionary Pioneer, said she learned to appreciate and admire her own mother’s work as a social worker, and that, like all first responders, nurses must be willing to seek, and to accept, help from others, and to work in interdisciplinary teams.

“I learned that at our best, nurses bring both healing and hope. I learned to assume, even against the odds, that all parents love their children and sometimes need first and foremost something to eat, somewhere to sleep safely, and clean diapers for their babies. These lessons have stayed with me and, in many important respects, over the last three decades have steered my career. My wish for you is that you will have a patient like this baby and her mother,” Oros said.

The 311 degrees awarded by UMSON included 197 Bachelor of Science in Nursing (BSN), 11 Doctor of Nursing Practice (DNP), 40 Master of Science (MS), 55 Clinical Nurse Leader and eight certificate graduates. Fifty-eight of the BSN degrees were conferred to students at the Universities at Shady Grove.

“It is my great honor and privilege to be with all of you today on a very happy, special occasion, ” he said.

“No other profession offers such a diverse range of career paths and opportunities for professional advancement,” she said.

David L. Vander Beek, BSN ’17, was selected to offer remarks to the class.

“As any of these graduates will tell you, nursing school is not easy. Personally, I started out with a full head of hair,” he said as he removed his graduation cap to show everyone his bald head. “This program has taken years of hard work, intense dedication to scholarship, and real character to handle truly difficult situations, both in and out of a clinical setting. After all the lectures, assignments, exams, and care plans, we, the class of 2017, have finally made it to graduation.”

Vander Beek compared his nursing school education with his recent completion of the Baltimore Running Festival half marathon.

“It doesn’t matter how much experience you had before, you will start at the same point as everyone else,” he said. “Previous experience helped a little, but everybody had to complete the same courses. In a marathon, as long as you never give up, it doesn’t matter how fast you run. In nursing school, when learning a new concept, some people may learn faster than you and even pass you. Sometimes you may have to slow down and take a break, and that’s fine. As long as you never quit.”

Photos from the UMSON December 2017 graduation ceremony in Baltimore may be viewed here.