This summer, the University of Maryland, Baltimore (UMB) welcomed more than 50 teenagers into the family in its role as a YouthWorks employer. The teens gained valuable skills and relationships while learning what UMB has to offer.

UMB has participated for more than 25 years in the work readiness program coordinated by the Mayor’s Office of Employment Development and expanded after unrest in Baltimore in 2015.

YouthWorks gives city youth the chance to pursue their interests and to gain experience they might not get otherwise, and UMB loves to help its neighbors.

The teens received payment for five weeks to work in one of four capacities: in the UMB CURE Scholars Program (CURE), in the UMB Community Engagement Center (CEC), in administrative roles as part of Hire One, and in the Summer Bioscience Internship Program (SBIP). 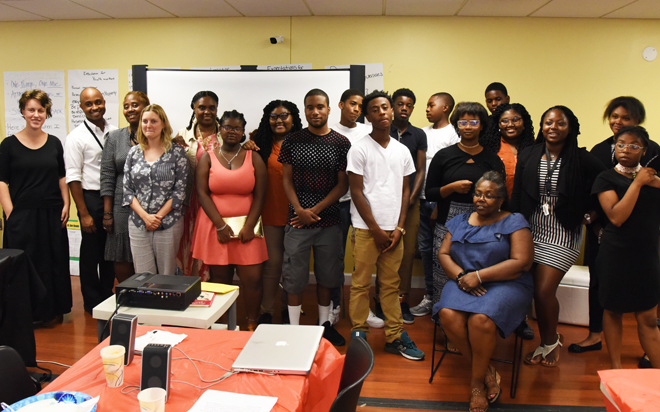 Some of the SBIP youth worked in the R Adams Cowley Shock Trauma Center in a partnership between UMB and UMMC. Students worked on the Stop the Bleed campaign, which teaches ways to apply tourniquets to stop bleeding after cuts or wounds.

The overall campaign was featured in an Aug. 9 article in The Baltimore Sun. The students developed a public service video to be made available to schools across Maryland.

“A lot of these kids come from communities where you might not have healthcare professionals and scientists right down the block,” Sturdivant said. “They might not have someone who works in a professional career on their whole block. They don’t have access to these people. So, who are they going to learn from if they don’t learn it from us?

“I consider the University of Maryland, Baltimore as that neighbor — the neighbor who has that professional experience and can share it with kids in the neighborhood,” he said. “To me that’s who we are as an institution in these communities.”

The CEC assigned workers to one of four projects in West Baltimore neighborhoods: Historic Preservation, Mount Clare Vacant Housing, Merchant Access, and Pop! Farm. Each group went out into the community and gained skills. Dejahna Banks, a worker on the Mount Clare project, said her most valuable new skill was “asserting myself and adapting a confident ability in new communities.”

Banks was among several youth employed by UMB from June 26 to July 28 who were interviewed for a July 9 Baltimore Sun article about YouthWorks. While the YouthWorks age range is 14 to 21, many employers take only older students who have already developed professional skills. The CEC team steps up by taking younger workers.  At the CEC, all but Banks and one other worker were younger than 16, said William “Bill” Joyner, MSW, coordinator of community engagement.

CEC workers received presentations on financing and college preparedness as well as learning work skills. Joyner said the CEC also taught students soft skills that others their age might not have. “Things like showing up to work, arriving on time every day, and staying until the end of the day every day,” Joyner said. “We taught them how to type.”

Then there are bigger skills they can utilize at the end of the workday: budgeting, saving, managing and earning credit, and banking.

Joyner, who has helped lead the CEC’s YouthWorks program for both years of its existence, also added content to help young people build and maintain relationships in their communities.

On the last day of work, each group in the CEC program gave a recap of their projects at the center’s monthly lunch.

Some parents and other family members were among the many local residents, who were served by several volunteers from the University of Maryland School of Dentistry. According to Banks, presenting to the group of over 100 made her nervous, but she “was just excited to get our projects out into the community so they could see what we’ve done these past few weeks.”

Each group had different results to showcase. For example, the Pop! Farm workers described how they had organized “Paint the Garden,” a cookout and multigenerational event on July 25. Using posters and social media, they attracted more than 75 participants, many of whom became artists for an afternoon.

Youthworks supervisor Chanté Bonner, MSW ’16, LGSW, arranged for an instructor and provided art supplies; the teens tackled everything from hauling chairs outside to offering guests a selection of brushes to dip onto foam-plate palettes.

HIRE One/YouthWorks program, has just completed its twenty- seventh year, hiring students ages 16 to 21 who live in Baltimore or attend school in Baltimore.  This year, the program hired 18 students.

Camille Givens-Patterson, equal employment opportunity specialist, who along with Kim Mathis, office manager for the Office of Accountability and Compliance are the coordinators of the program.  They praised the caliber of students.

“They’re all very customer service oriented,” Givens-Patterson said. “Our students are eager to learn and extremely helpful.   The students come prepared to work and reach beyond expectations.”

Each HIRE One/YouthWorks student is paired with a mentor, based on the interests of the mentor and the student.  The one-on-one relationship between mentor and mentee provides not only a great work environment, but the students also have the opportunity to shadow their mentors, become more familiar with the University and attain knowledge in their fields of specialty.  This is truly a unique partnership between a mentor and mentee at the University, she said.

Students who have expressed an interest have been able to return to UMB provided their work site performance is good.  There have been several students who have attended the program for multiple years, and in some cases acquired full-time positions. Jana Anderson, who started in YouthWorks, now works as a full-time employeeas an administrative analyst in Central Administration Support Services.  Joseph Jones III began at 16 as a HIRE One/YouthWorks student interested in public safety, and is now employed full time as a security officer in Public Safety.

“This program is an opportunity for a student to see what they are interested in, Givens-Patterson said.

No matter the program, there was one thing that every student can say they gained – ice cream. All four groups came together July 27, nearing the end of their last work week, to celebrate with an ice cream social.  UMSOP played host to the 55 students who had called UMB home. Needless to say, the kids were thrilled to take a little time off after such an engaging summer.