Eighteen months ago, when their son was born prematurely with several complex medical conditions, Keshawn Tolbert and Kevin Kirby Sr. did not know they would one day be in front of an audience of more than 350 University of Maryland, Baltimore (UMB) students and faculty, sharing their story of how a team-based approach to health care has benefited their family.

“It was overwhelming,” recalled Tolbert, recalling her first visit to the President’s Clinic, a multidisciplinary gastroenterology clinic directed by UMB President Jay A. Perman, MD, and nurse practitioner Elsie M. Stines, DNP, CPNP. “But it was nice to know that everyone was there to help my son and everyone had him on their minds and they were trying to figure out the best care for him. And I didn’t have to tell my story 12 times.”

The family shared their experience on a panel kicking off Interprofesssional (IPE) Day April 5 in the University of Maryland School of Nursing (UMSON) auditorium. Now in its fifth year, this was the first IPE Day in which students heard directly from a family of a patient being treated by a multidisciplinary team.

“We wanted to share an experience of a family who had an opportunity to work with an interprofessional team,” Stines told the audience. 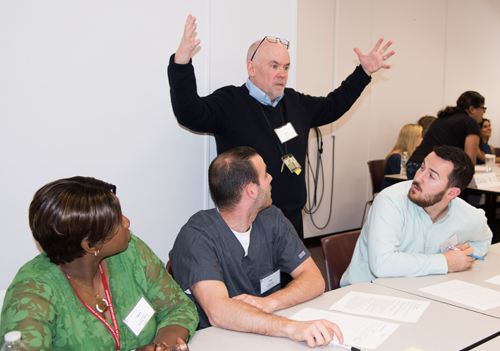 During an exercise highlighting interprofessional education, Dr. Vincent Conroy, an assistant professor with the Department of Physical Therapy and Rehabilitation Science at the University of Maryland School of Medicine, reminds students from multiple disciplines to take a "big picture" approach when assessing a patient's needs.

IPE Day is designed to help students learn how to effectively communicate with professionals outside of their area of study, what skills they can share with other disciplines, and how interprofessional communication affects the quality of care.

The day began with greetings from UMSON Dean Jane M. Kirschling, PhD, RN, FAAN, and director for the Center for Interprofessional Education, and Perman, whom Kirschling introduced as “the biggest champion for interprofessional education, not only at the University of Maryland, Baltimore but on a much larger scale.”

“This fills me with pride, that there are so many of you here who have come to know much more quickly than I did in my education and my career that there is a richness in appreciating what colleagues in other professions can bring to the care of patients who come to you to regain their health,” said Perman, who has made IPE a priority during his administration.  “You get it.”

The evidence of team-based health care is emerging, Perman said, showing that team-based care results in greater patient satisfaction and leads to better outcomes, particularly in those patients who suffer from chronic illnesses.

When Tolbert attended her first appointment with son Kevin at the President’s Clinic in November 2016, Stines said she was skeptical of the mom’s commitment to her son, having learned that she had missed several appointments with other health care providers.

“I was thinking ‘this is not a compliant mom. Why is she missing so many appointments?’” Stines said.

Stines asked Tolbert about the missed appointments and learned that the family had difficulties securing reliable transportation. Often transportation arrangements would either fall through or run late, causing her to be late for appointments.  Several times when she was late, she was turned away.

Through an interdisciplinary team comprised of professionals from the fields of social work, pharmacy, nursing, and medicine, the family was assisted in several ways, ranging from an improved schedule for giving medications to their son to an easier way of making the baby’s formula.

When Kevin first came home from the hospital and was under the care of 12 different caregivers, his parents had to administer medications around the clock.

“It was every hour on the hour and it was so hard,” said Tolbert. The child is on 14 medications. A more manageable plan was developed at the President’s Clinic and now the family is administering all the medications just twice daily.

“That works much better for us,” Tolbert said as the audience applauded.

“See, that’s what happens when there are 12 different caregiver groups.” Perman said. “Nobody stops to think about everybody else’s part. I wouldn’t have done it any differently than colleague physicians. But [at the President’s Clinic] I have a colleague pharmacist and colleague pharmacy students here who said, ‘Oh, we can make that simpler.’”

Tolbert also found that mixing up small batches of formula for Kevin every two hours, eight to 10 times a day, caused her considerable pain due to suffering from lupus. A dietitian at the President’s Clinic, Ryann Diehl, RDN, LDN, recommended instead of shaking up the formula by hand, the family purchase a blender.

“It’s so much easier,” Tolbert said, who now makes one batch in the morning that lasts for the day.

“These are not the things we learn in medical school,” Perman said. “Look at how important it is.”

Students had an opportunity to put team-based health care into practice later in the afternoon as they broke into multidisciplinary groups to meet in break-out sessions at the School of Nursing, the Health Sciences and Human Services Library, and the Southern Management Corporation Campus Center. Their task: develop a care plan for trained actors, also known as standardized patients, posing as a family member providing care for 91-year-old “Viola White,” who has been diagnosed with dementia, arthritis, cellulitis, and several other conditions.

“I had so many more questions for him,” said Richard Edgar, a University of Maryland School of Medicine student, when it was announced his team’s time for getting information from White’s “son” Robert, played by actor Thom Sinn, had come to an end.

After the exercise, Edgar said IPE Day was an invaluable experience.

“I loved it and would do it again in a heartbeat,” he said. “It was a great way to learn from each other and to see where people from other disciplines could provide input.”

Added physical therapy student Tobi Oke, “It really helped me to look at the patient as a whole. It was a very powerful experience.”

Sarah Strenio, a student of the University of Maryland School of Social Work, said participating in IPE Day changed the way she views the level of assistance she can provide to patients.

“I realized in working with the team today that where I usually think where my role stops is getting them to the doctor’s office and making sure they have transportation and making sure they have insurance to pay for it, but actually being part of the health care team was something new for me,” she said. “It was very interesting that I can contribute to their health in a more direct way if I am working with the other health care providers.”

Beth Conn, a University of Maryland School of Dentistry (UMSOD) dental hygiene student, said she did not have a good feeling when she first read about the complicated case of Viola White. “I felt super hopeless and I instantly started to feel hope once we started to communicate [as a team] and started to talk about coming up with a plan.”

UMSOD student Alexandra Fitzgerald added she was impressed that she already knew questions to ask the patient that were not within the scope of her field.

“I think for me, today really reiterated that the School of Dentistry does a good job that we are all aware of questions to ask the patient from an interprofessional perspective,” she said.

Niki Razeghi, an audiology student from the University of Maryland, College Park, said IPE Day provided an opportunity for her to educate other students about audiology.

“A lot of people don’t know that we exist,” she said.  “So it was really important for me to be able to speak up and just kind of advocate for us in the field and the importance that comes into the care of patients.”

“We can do all these things and have all this knowledge and study all these items for a test – tests are great – but what really matters is learning it for the patient,” added Mark Bickley, a University of Maryland School of Pharmacy student. “In a real-life situation, you’re trying to help people and treat others … the main takeaway is we can maybe have the perfect regimen for a patient, but if they’re not able to get access to the medication, that’s a situation that we need to deal with and that’s real life.”

UMSON student Jim Bontuyan said having the specialized patient scenarios be divided into a period of assessing the patient and a period of delivering a care plan proved to be a beneficial structure to the day.

“The second group really dealt on the observations made by the first group,” he said. “They took some of the chaotic part of questioning of the first group and made it more organized in terms of application of the plan for intervention.”

Adam Bortner, a School of Medicine student, said he was particularly grateful for having a social work student on his team.

“I always appreciate having a social worker on the team because I think they are really good about paying attention to the person in front of us, paying attention and supporting them. Because I think, at least in medicine, we get so caught up in ‘what medications are you taking? What’s the problem here? What’s the diagnosis? What workup do we need?’ We forget sometimes about the human being.”