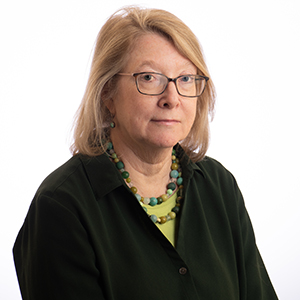 Margaret "Peg" McCarthy, PhD, is the James & Carolyn Frenkil Endowed Dean's Professor, and professor and chair of the Department of Pharmacology at the University of Maryland School of Medicine (UMSOM).

She was a National Research Council fellow at the National Institutes of Health before joining the faculty of the Department of Physiology at UMSOM in 1993. McCarthy was the associate director of the Program in Neuroscience and the inaugural director of the graduate program in life sciences as an assistant and then associate dean before becoming the chair of the Department of Pharmacology in 2011.

She was also appointed as the director of the Program in Neuroscience.

McCarthy has been recognized with the Patricia Sokolove Outstanding Mentor Award by the Graduate Student Association, Researcher of the Year and a Champion of Excellence by the University of Maryland, Baltimore as well as being named one of Maryland’s Top 100 Women. She is past president of the Organization for the Study of Sex Differences, a member of the Dana Alliance on Brain Research, and a fellow of the American Association for the Advancement of Science.

For the past three decades, McCarthy and her colleagues have been exploring brain development in an animal model to understand how the nervous system is formed in both health and disease. She has discovered novel mechanisms by which male and female brains become differentially vulnerable to the impact of injury and inflammation, which can have lifelong consequences for risk of neuropsychiatric and neurological disorders. McCarthy is strongly committed to scientific training, having directly supervised over three dozen graduate students and postdoctoral fellows and hosted over 50 summer interns and visiting foreign scientists from Iran, Pakistan, Italy, Spain, Japan, Brazil, and Mexico. She is a highly sought-after speaker locally and internationally and has published close to 250 scientific manuscripts.

She is also the proud mother of two children for whom she shares credit with her husband of 26 years.