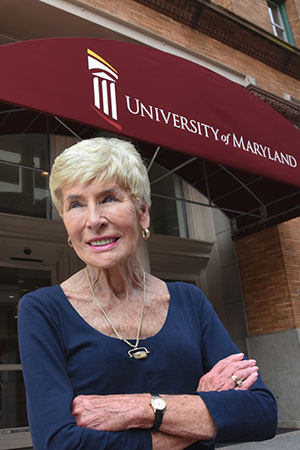 Carolyn Frenkil demands a lot of herself, attributing it to her upbringing in Dundalk in the late 1940s.

“I grew up in a community where we were held accountable for what we did or did not do,” she says. “Hard work, honesty, respect for others were fundamental expectations — anything less was unacceptable.”

That mindset has taken the community activist, businesswoman, and stalwart supporter far. On May 18, she will receive an Honorary Doctor of Public Service at the University of Maryland, Baltimore’s (UMB) commencement ceremony, the latest in a list of awards that includes Maryland’s Top 100 Women, the Girl Scouts of Central Maryland Distinguished Women’s Award, and the Community Service Award from Cheder Chabad.

She had that resourceful determination when she made her way from mail clerk and administrative assistant at Bethlehem Steel to the Xerox Corp., where she became the first woman to move into its sales department. She was determined when she became an assistant to the state commissioner of labor and industry and when she was named the state commissioner of occupational and professional licensing, which resulted in death threats when she cleaned up the budget and had those making shady deals removed.

“For me, honesty was the only policy,” Frenkil says. “I expect nothing less from myself and others. You break the rules, you pay a price.”

The independent and successful woman then met and married James Frenkil, MD, University of Maryland School of Medicine (UMSOM) Class of 1937. The late Dr. Frenkil, who died in 2009, not only gave her 26 years of marriage. He also gave her a gift that has become her passion — entry into the inner workings of UMSOM.

Their first major contribution to UMSOM/Faculty Physicians, Inc. was a nearby office building formerly used by Dr. Frenkil’s occupational medicine practice. Then they set up the James and Carolyn Frenkil Foundation, which jump-started the kind of giving Ms. Frenkil continues. She donated money to purchase equipment/furniture for UMSOM’s Executive Health Program and the school’s new Media Center. She helped fund a course in the cutting-edge field of pharmacogenomics (which is offered to all second-year medical students), and supported collaborative research in the medical school’s Program on Aging, Trauma, and Emergency Care, and helped establish the Medical Alumni Frenkil-Passen Historical Scholar in Residence.

In addition to her money, Frenkil has devoted her time, serving on the UMB Foundation Board of Trustees (which presented her with its first Distinguished Service Award in 2015), the President’s Roundtable, the UMSOM Board of Visitors, and the Alumni Association Davidge Hall Committee, to name a few.

Helping UMB/UMSOM is time and money well-spent, she says.

“Quite frankly, I can’t imagine anyone not embracing an opportunity to be actively involved with this renowned institution,” Frenkil says. “The continuous ‘pursuit of excellence’ is evidenced in all we do … from cutting-edge research, into the classroom, and throughout the schools/campus. It doesn’t get any better than this. The opportunity to be personally and financially engaged makes it possible for me to, hopefully, have a positive impact on our society, improving our quality of life. These are not just words … I live this every day.”

An entrepreneur in her own right, Frenkil acquired Center City, Inc., in 1997 and with business partner Mike Shecter runs the North Avenue Market project, renovation in the Station North Arts and Entertainment District.

Before that, she created — and sold — Substance Abuse Services, Inc., which provided drug/alcohol testing of employees in the transportation industry, which was mandated by the U.S. Department of Transportation after an Amtrak train derailment near Baltimore.

“Over the course of several decades, Ms. Frenkil has pursued a vision of urban vibrancy where arts, culture, and the humanities are anchors of community vitality,” Perman said. “With her characteristically infectious optimism and indisputably savvy business skills, Ms. Frenkil has inspired the engagement of many of the area’s most influential grass-roots, political, and religious leaders in transformative causes that save lives and build communities.

“Sharing a generations-old spirit of philanthropy with her late husband, Dr. James Frenkil, Ms. Frenkil’s charitable and business endeavors have fundamentally changed the quality of life for University of Maryland, Baltimore neighbors, near and far.”

She says she is fortunate to be afforded the opportunity to “make a difference” and is “stunned, overwhelmed, and humbled” to be receiving an Honorary Doctor of Public Service from UMB.

Years from now, she says, no one will remember her name.

"But I am going to live on in the lives of those people who have benefited from what I and my late husband have done — and hopefully, they will continue that legacy," she says.


Back to Speakers and Honorees