Director of the Peace Corps 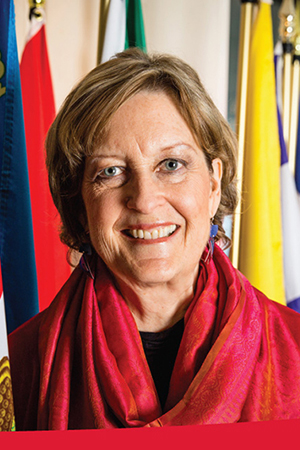 Former UMB faculty member Jody Olsen, PhD, MSW, confirmed in March as the next director of the Peace Corps, will be the University’s keynote speaker at commencement on May 18.

Olsen has served four previous stints — the most recent in 2001 to 2009 as deputy director and then, for eight months, acting director — with the Peace Corps, the country’s flagship international service organization with more than 230,000 American volunteers assisting in 140 host countries since President John F. Kennedy established it in 1961.

Interested in giving back, Olsen came to UMB in 2010 and became immersed in activities as a visiting professor at the School of Social Work, lecturer at the Graduate School, founding member of UMBrella (UMB Roundtable on Empowerment in Leadership and Leveraging Aspirations), even moderating UMB’s 2017 Women’s History Month panel discussion with community leaders and Baltimore Mayor Catherine Pugh.

Olsen also kept international affairs close to her heart as director of UMB’s Center for Global Education Initiatives and co-chair of the Global Health Interprofessional Council. She used her deep knowledge of international development (she has traveled to more than 100 countries) and her commitment to interdisciplinary learning to redefine high-quality out-of-country experiences and give UMB students a transformative global education.

She was nominated by President Donald Trump to lead the Peace Corps on Jan. 3. In her remarks before the Senate Foreign Relations Committee in February, Olsen focused much of her testimony not on the Peace Corps’ work overseas, but on how Peace Corps volunteers strengthen their home communities once they return from service abroad.

“Returned Peace Corps volunteers bring home unique language, cultural, and diplomatic skills,” she said. “They are true global citizens, contributing to our economy, our country, and the urban and rural communities where they live and work all across the United States.”

She added: “Time and again … I see the remarkable ways that returned Peace Corps volunteers teach, inspire, and strengthen communities back home in the United States.”

The students from across UMB’s schools benefited in much the same way from the four summer research projects in Malawi that Olsen participated in and the student trips she led to Central America and South Asia.

“We’re trying to cultivate a mutually respectful situation to solve problems,” Olsen said in 2014 after 33 students from all seven UMB schools traveled in teams to Rwanda, Kenya, Gambia, Malawi, Zambia, Hong Kong, and the Philippines to work on solutions to community-specific health problems. “The opportunity to do that is a gift. It gives students a head start in a world where we’re increasingly dependent on each other.”

Olsen knew she wanted to work globally during her first few days as the Peace Corps’ country director in Togo. With the ink barely dry on her dissertation — a study of end-of-life satisfaction in elderly populations — Olsen landed in the West African nation with her family. There, she oversaw the work of 135 volunteers.

“I walked into that office and I knew immediately I would stay international,” she said. “I liked the action. I liked leading international teams and creating an environment for people to be successful.”

Now confirmed, Olsen will have the opportunity to do just that for the 7,400 current Peace Corps volunteers. She could face some hardships, with the organization perhaps facing 15 percent budget cuts, according to some reports.

But Richard P. Barth, PhD, MSW, dean of the School of Social Work, has no doubts that Olsen will excel.

“Jody Olsen is a tireless champion,” he said. “She is a terrific communicator, relentlessly optimistic and affirming, and exceptionally knowledgeable about all things international.”

Glenn Blumhorst, president and CEO of the National Peace Corps Association, echoed Barth’s praise after the nomination was announced. “America and the world need the Peace Corps now more than ever,” Blumhorst said in a statement. “We’re excited Jody has the opportunity to lead it.”

Sidhu is about to graduate from the Francis King Carey School of Law, where she has advocated for social change, juvenile justice reform, and fair representation for underserved populations.

An alumna of the School of Nursing, Bunting became a nun and nurse practitioner and practiced at Mercy Southern Health Center. Granddaughter of the pharmacist who invented Noxzema, she has endowed scholarship support at the school and elsewhere, including Mercy Medical Center.

Frenkil is a community activist, businesswoman, benefactor, and longtime friend of the School of Medicine. Her late husband, James Frenkil, MD, introduced her to the school, which she has supported with a number of innovative endeavors.

The husband and wife team can point to accomplishments in a variety of fields — business, dentistry, education, and philanthropy — but their successes are woven together by one simple thread. Smith calls it "The Rule of One."

To appreciate the lengths Kauffman will go to provide public service, turn back to 2010 when she took 23 dancing lessons in 13 weeks to be a “dancing star” at the Alzheimer’s Association’s Greater Maryland Chapter’s Memory Ball, raising $12,000.

Rodgers is professor emeritus in the Department of Physical Therapy and Rehabilitation Science at the School of Medicine, where she served in roles including department chair for nearly 25 years.

As a researcher for nearly 25 years in the Department of Physical Therapy and Rehabilitation Science at the School of Medicine, Whitall attracted several million dollars in funding.

Read advice for the UMB Class of 2018 from this year's esteemed speakers and honorees.