“Downtown is doing better than it has in a generation,” a proud Jay A. Perman, MD, president of the University of Maryland, Baltimore (UMB) and board chair of the Downtown Partnership of Baltimore (DPOB), told hundreds of the city’s top business and political leaders at a Sept. 27 gathering.

The occasion was the annual meeting of the DPOB, which oversees the Downtown Management Authority, Baltimore’s oldest and largest business improvement district. It also was the 10th anniversary of the completion of DPOB-guided renovations of the meeting’s location, Center Plaza at the heart of the Charles Center neighborhood at West Fayette and North Charles streets. 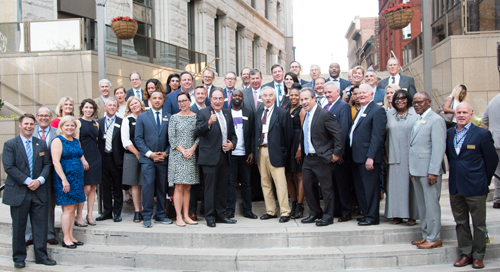 DPOB Board Chair Jay A. Perman, MD, gives a thumbs up amid the other board members at the 2017 annual meeting.

“We were confronted with a public space that had a problem,” said DPOB President and CEO Kirby Fowler, looking back at 2007. “It was cold and dark, and it needed some new life. It needed a solution. So we teamed up and created a public-private partnership, a $7.5 million partnership involving on the private side BGE, Peter Angelos, Southern Management (Corporation), and then on the public side Baltimore City, the state of Maryland, and the U.S. government.”

Fowler also used the occasion to celebrate the findings of the organization’s latest housing study. In it, the consulting firm Zimmerman/Volk Associates predicts demand for nearly 7,000 new housing units in the downtown area over the next five years. The number is surprising, given the rapid rate of housing growth in the area recently. The study shows that more than 5,000 new housing units were added since 2012, yet the vacancy rate remains a very high 94 percent.

“It’s all of us working together,” said Baltimore Mayor Catherine Pugh, pointing to other strong signs of growth. “We talked about over a half a billion dollars in investment, $500 million in investment in downtown. That does not include the over $200 million that Goldman Sachs just invested in Port Covington so that we can bring Amazon here to Baltimore.”

After cheers brought on by the reference to Baltimore’s bid to be the site for Amazon’s new second headquarters, she added, “Kirby, we could not have a better partner in Downtown Partnership with you as the president and CEO. … I’m so excited about this partnership, and Dr. Perman, it seems like we’re going to be partners every single day. I just saw you earlier today.”

“Downtown is enjoying a wave of office expansions, hotel openings, corporate relocations, and really a creative energy that makes us the epicenter of the region’s art and the region’s culture,” Perman agreed. “Everyone here in this plaza has had a hand in that success. “