University of Maryland Francis King Carey School of Law professors Larry Gibson, LLB and Garrett Power, LLB, LLM addressed the legacy of discrimination in Baltimore in the third event in a series of discussions on race on Sept. 25.

Dean Donald Tobin, JD initiated the series in the wake of a violent white supremacist rally in Charlottesville, Va., as a way “to foster productive conversations about the legal, moral, ethical, and social issues surrounding the Charlottesville protests and subsequent fatal attack on counterprotesters.” 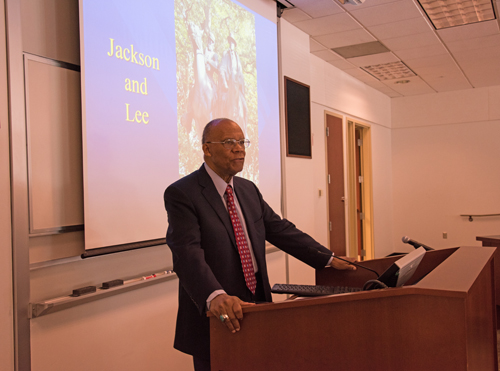 During the lunchtime lecture, Gibson spoke about the history of Confederate monuments in Baltimore and Power addressed the city’s history of residential segregation.

Power pointed to several Maryland law school graduates as co-conspirators in what he called “a white conspiracy in the restraint of decent housing for black Baltimoreans.”

Baltimore “super lawyer” William L. Marbury, an 1882 graduate, was on record as being opposed to any representation of “colored” men in government, according to Power. It was Marbury who redrafted a failed segregation ordinance for Baltimore’s Mount Royal neighborhood that was ultimately ruled unconstitutional by the U.S. Supreme Court.

That’s where Baltimore City Solicitor Richard Perlman, a 1912 graduate, stepped in with another segregation plan that included housing department citations for landlords renting to blacks and the institution of racially restrictive covenants in white neighborhoods such as Guilford and Roland Park. The Guilford covenant prohibited black occupancy in the posh North Baltimore neighborhood, with the exception of servants.

Gibson, who served on a mayoral commission to study the fate of the city’s Confederate monuments in 2015, outlined the history of Baltimore’s four memorials that were recently removed.

He noted that the memorials were erected well after the Civil War and were the products of the Lost Cause movement, a pro-Confederate historical interpretation of the Civil War that included a romanticized view of slavery as a benign institution with benevolent masters.

Baltimore’s first statue, the Confederate Soldiers and Sailors Monument, was unveiled in 1902 to a cheering crowd of thousands in Bolton Hill, said Gibson. Other statues included one of Confederate generals Robert E. Lee and Stonewall Jackson, a Confederate women’s monument, and a monument honoring Supreme Court Chief Justice Roger B. Taney, author of the infamous Dred Scott decision.

Gibson noted that he and the mayoral commission recommended keeping two monuments with the addition of historical context and removing the Taney and Jackson and Lee monuments. “There’s still a role that relics from the past can be used to educate by adding to the original descriptions or language” he said.

The commission’s recommendations were ultimately overruled when the monuments were removed Aug. 16.