At a Sept. 21 visit to the University of Maryland, Baltimore (UMB), Dr. Sir Rodney Williams, governor-general of Antigua and Barbuda, discussed the clean-up and rebuilding efforts taking place in the wake of Hurricane Irma in early September.

Antigua, with a population of 80,000, escaped the massive Category 5 storm relatively unscathed, but Barbuda, its smaller sister island, took a direct hit. 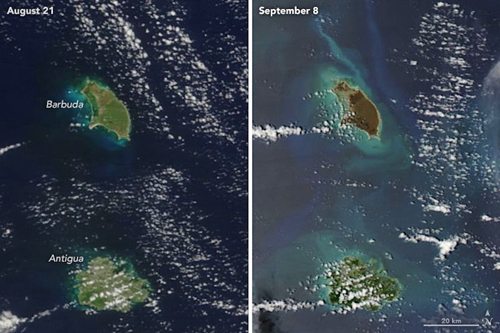 An image of Barbuda before Hurricane Irma shows green vegetation and after a dark brown. (Photo courtesy: NASA Earth Observatory)

Williams said 90 to 95 percent of the island’s buildings were destroyed by sustained winds that reached 185 mph. He credited the island’s preparation efforts with saving countless lives, saying they were “the best I’ve seen anywhere in the world.”

Weeks after the storm, the question turns to rebuilding the devastated island, whose residents have evacuated to Antigua for the duration.

“The challenge the government has is that the Barbudans want to go back to Barbuda tomorrow,” Williams said.

He said recovery efforts will take longer than impatient residents, eager to get to their homes and belongings, want to wait. “How do you go back to a country with no drinking water, without utilities, without electricity? What do you do at night?” Williams said.

Although his visit to UMB was planned well before Hurricane Irma, the situation caused him to expand on the initial reason to visit the region: medical collaboration.

“I am here with the view to developing a relationship with the University of Maryland and Antigua and Barbuda,” he said. “Our aim is to begin to strengthen the relationship so as to be able to improve the quality of health care for Antiguans and Barbudans.”

Roger J. Ward, EdD, JD, MPA, chief accountability officer and vice president of operations and planning, said while there is not yet a distinct plan in place, “UMB stands ready to assist Antigua and Barbuda in any way we can, especially as the country seeks to attend to the health care needs of its citizen in the wake of the devastation caused by the recent hurricane.”

Williams hopes to set up an exchange in which University of Maryland doctors travel to Antigua and Barbuda to share their medical and technical expertise.