“Talking from 9 to 5: How Women's and Men's Conversational Styles Affect Who Gets Heard, Who Gets Credit, and What Gets Done at Work” is an intriguing topic so it came as no surprise that Elm Rooms A and B at the SMC Campus Center were packed Sept. 21.

It also didn’t hurt that Deborah Tannen, PhD, MA, best-selling author and university professor and professor of linguistics at Georgetown University, was the guest speaker for the latest presentation in the UMBrella (UMB Roundtable on Empowerment in Leadership and Leveraging Aspirations) series. A luminary in the field of how everyday conversation affects relationships, she informed and entertained the University of Maryland, Baltimore (UMB) crowd with her insights, pictures, and film clips.

She pointed out the familiar bromide that men won’t ask for directions, but jokingly took it further. “Why did Moses wander the desert all those years? And my favorite: why does it take so many sperm to find one egg? So obviously I hit a nerve” with the men asking for directions reference, which Tannen used in You Just Don’t Understand: Women and Men in Conversation, a book that spent four years on The New York Times best-seller list.

While there was much levity, there were serious parts of her discussion as well. She explored why, when equally qualified men and women are hired at the same time, five years later, men are moving up in the organization and the women have either gotten stuck at a lower level or they’ve left. “Could it be something about their ways of speaking that plays a role?” Tannen asked.

To find out, Tannen, author of Talking from 9 to 5: Women and Men at Work and 10 other books, did much research, beginning with children. She found the same patterns played out all over the world.

Girls looked at each other when they spoke, gathered in smaller groups, even whispering in the ear of a best friend. Boys looked around the room instead of at each other in two-person settings and played in larger groups, with activity (not conversation) being the central focus. When groups of girls don’t like a girl, they exclude her. When groups of boys don’t like a boy, they include him, but mistreat him. 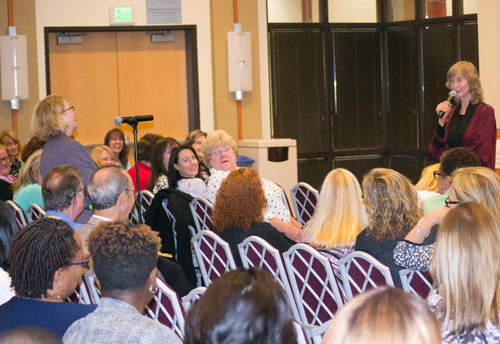 If there were doubts in the UMB audience, Tannen dispelled them with film clips that supported her case. For instance, in telling people what to do, an imperative in the workplace, Tannen showed men saying such things as:

•    “Send a letter saying I’ll serve on this committee.”

Women performing the same function in the film clips said:

•    “Could we add something to it and then say we’ve come to address the issues?”

•    “You know what I would do? I would put the creative head of the Conservatory Theater of San Francisco … just set that person up before you say their name.”

•    “Can we just look at the affordable housing piece? Maybe we can take a look at what’s coming down the pike there.”

Then she discussed a clip of a woman saying to a male colleague “Is there any way you could get that done today?” and the man replying “nope.”

That shows a lack of balance, Tannen said. “You expect the answer to be along the lines of  ‘I don’t know. We’re pretty backed up today, but we probably can.’ That would balance out with the question. When he simply says ‘nope’ it’s like being on a seesaw and you trust the other person to sit on their side so that you will stay up in the air. If they get up, you go plopping to the ground. And that is often what happens when conversation styles are different. You can go plopping to the ground and wonder how you got there.”

So conversation is indeed a complex thing, says Tannen, who is a frequent guest on television and radio shows. Getting others’ input can be seen as not being able to make a decision. But not seeking that input can come off as abrasive.