Karen L. Kotloff, MD, has made many friends and many contributions during her 35 years at the University of Maryland School of Medicine. So her 2018 UMB Researcher of the Year presentation on Oct. 16 turned into quite the celebration with plenty of praise to go around.

What began with glowing words from the University president and Kotloff’s supervisor ended nearly an hour later with a standing ovation from the 100-plus people who crammed into Health Sciences Research Facility II auditorium to pay homage to Kotloff. 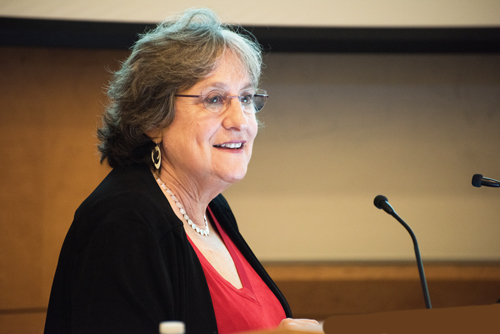 “I’ve had the privilege and pleasure of working with Dr. Kotloff for close to three decades,” said Jay A. Perman, MD, who was her department chair in Pediatrics long before he became president of the University of Maryland, Baltimore (UMB). “You have focused on saving the lives of children in some of the world’s poorest countries and I can’t think of a more worthy recipient of this honor.”

Kathleen Neuzil, MD, MPH, director of the School of Medicine’s Center for Vaccine Development and Global Health (CVD), where Kotloff is associate director of clinical studies, called the professor and head of pediatric infectious diseases “a superb scientist, an international leader in the field of vaccinology, and a tireless champion for access to vaccines in children’s health around the globe. Her impact has been multiplied by the dozens of physicians and scientists whom she has mentored.”

Then Kotloff took the podium and recapped her career with stories, slides, and passion.

A leading authority in human controlled infection models for shigellosis, a major cause of diarrhea morbidity and mortality in children, Kotloff mixed in some humor as well. She thanked former CVD Director Myron “Mike”  Levine, MD, DTPH, for involving her in an early project that was a study of diarrheal diseases. “That was the start — and I know it’s hard to understand — of my love of diarrheal diseases,” Kotloff said, drawing laughter from the overflow crowd.

She was known as “the bag lady” for putting red bags on babies’ cribs from whom she needed stool samples. And when early pictures showed a pregnant Kotloff with several other soon-to-be mom researchers, she joked it was “an epidemic of pregnancy.”

But most of the work Kotloff has performed so well for so long is deadly serious. In the beginning it was babies with HIV and diarrhea in Baltimore. STDs and the papillomavirus. HPV and cervical dysplasia in college students.

“To summarize those early years, I think you can say it took a village to launch my career,” she said. “It took mentors to provide the context and the opportunities. It took the resources of the CVD to determine the etiology of diarrheal diseases. It took institutional processes to provide seed funds so that I could generate preliminary data and strong collaborators. I felt I was in a very rich environment to really grow as a faculty member.”

It was the “second part” of Kotloff’s career where she really fell in love with public health, she said. In 2001, her work took her to Mali, a poor country in West Africa with one of the world’s highest childhood mortality rates. Many haven’t heard of Mali. “My husband’s aunt is constantly asking me if I’ve been to Maui [the Hawaiian island] lately,” Kotloff said with a smile.

Levine had the vision of starting a field site in Mali, which was named CVD-Mali, Kotloff recalled. It is a center for infectious disease research teaching and public health in order to generate data to accelerate public health and to save lives.

There Kotloff met CVD-Mali’s first employee and “one of the most influential people in my life — Dr. Samba Sow,” who was the coordinator of the field site and is now the Malian Minister of Health. “Since 2001 when we had two employees we now have over 250 employees and it’s just a site that’s been able to do amazing things,” Kotloff said.

A series of epidemiologic studies followed to understand the causes and consequences of fever, pneumonia, diarrheal diseases, and tonsillitis from group A streptococcus. Whenever possible, Kotloff, an advisor to the World Health Organization whose present research portfolio totals over $50 million, helped to introduce vaccines and other interventions to curb the disease burden and then measure the impact of that intervention.

During her talk she pointed out how the CVD paradigm of “Evidence/Impact/Action” had been used in each case.

“We’ve come a long way,” she said, pointing out that basic tools like blood cultures and bacterial labs didn’t exist when the CVD first arrived in Mali. “But we have a long way to go.”

UNICEF reports a 50 percent reduction in under-age 5 mortality since 1990. “That’s the good news,” Kotloff said. The bad? “There are 5.4 million children who die each year before reaching their fifth birthday; 14,800 of them die every day; 10 die every minute, most of them in sub-Saharan Africa. So what we have  been able to access and improve — here we call it the tip of the iceberg, in Mali it’s the eyes of the hippo, as my mentor and friend Samba always says.”

Kotloff summed up her talk with a montage of pictures giving thanks and some words of advice.

“Public health opens your eyes to how the rest of the world lives,” she said. “It touches your heart, it inspires you. When you see what people do and how resourceful and energetic they are … it shows you what happiness means. People are resilient and they make the best of what they have been given. And public health needs you. So I hope that maybe there is something in this talk  that interested someone in the room enough so that they will begin a career in public health.”