“Welcome to One Light Street, M&T Bank’s new home and new headquarters,” M&T regional president August “Augie” Chiasera declared to applause at the 2018 annual meeting of the Downtown Partnership of Baltimore (DPOB) on Oct. 18. Chiasera was clearly proud to host the meeting in the as-yet unfinished office space on the building’s ninth floor, and excited to stay in Baltimore.

“We committed our future to Baltimore many years ago because we believe deeply that this is a great place to work, it’s a great place to live, and it’s an awesome place to conduct business,” he told the roughly 700 business and civic leaders present. 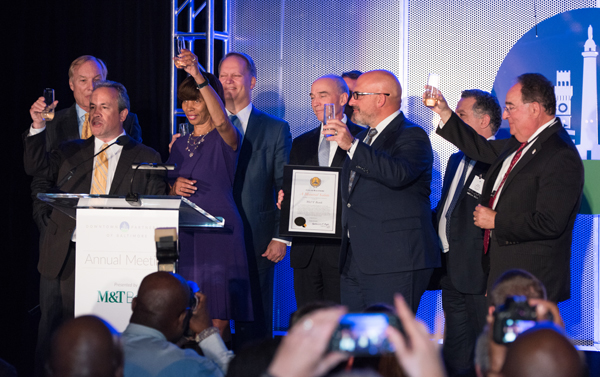 DPOB President Kirby Fowler drove home the portent of M&T’s new regional headquarters. “M&T’s lease was set to expire and clearly the bank could have relocated anywhere in the region,” he said. “It says volumes about downtown as a business location that they wanted to stay right here.”

Chair of the DPOB and University of Maryland, Baltimore (UMB) President Jay A. Perman, MD, added that One Light Street, already nearly fully leased, is the latest in a succession of downtown developments that are rapidly changing the city.

“In this one block of Light Street, we can see Baltimore’s future. The historic 10 Light across the way, nearly fully leased with residents. And now One Light, a modern counterpoint that will draw people into downtown day and night,” he told DPOB members. “This property — along with all the Downtown Baltimore award winners we’ll be honoring in just a minute — illustrate the wave of office expansions, hotel openings, and corporate relocations we’re seeing throughout downtown.”

Changes and improvements to the downtown landscape are not only changing Baltimore’s business environment, they also are transforming Baltimore into a highly desirable place to call home. “Baltimore is one of the top 10 cities in this nation that millennials are choosing to live in. They get it. As quick as we’re building the building, they’re ready to move in,” said a smiling Baltimore Mayor Catherine Pugh. She was quick to mention other new developments just over the horizon, such as the move of 13 cybersecurity companies to Baltimore, creating what she called the “cybersecurity center of the world.” Pugh also reminded of the redevelopment of the Lexington Market on the western edge of the downtown area, adjacent to UMB, which is expected to break ground in 12 to 18 months.

Perman noted that he and the mayor are “reinvigorating” their UniverCity Partnership, focused on improving the Westside community. “When I talk about UMB’s commitment to revitalizing the neighborhoods around our campus, I talk explicitly of the Westside community, because this is our link — our bridge — to downtown,” he explained, adding that renewed focus from the University and the city is needed to ensure the Westside shares in Baltimore’s economic success. One action UMB is taking is the conversion of unused and deteriorating University-owned buildings into productive additions to the neighborhood immediately between UMB and the rest of the downtown area.

“You’ve probably seen coverage of our planned redevelopment of the Drovers and Mechanics National Bank building at Eutaw and Fayette. The project includes hotel, apartments, retail, and parking. We hope it can serve as an anchor for the Bromo Arts District and as another community asset while the nearby Lexington Market redevelopment comes together,” Perman said.

“The project has the potential not only to transform the immediate area, but to catalyze interest in the Westside and jump-start the process of knitting together our fast-growing downtown and its western border. But we know this vision depends on all of us coming together — the University, the city, the Partnership, private developers, and nonprofits. Downtown is proof of what we can do together, and I look forward to applying that same effort and attention to the Westside.”

For more information about the Downtown Partnership of Baltimore, visit its website.