Since the launch of the BioPark Initiative in 2003, the BioPark has grown to include nearly three dozen companies with more than 1,000 employees. Looking out a fifth-floor window of BioPark Building One, BioPark Senior Vice President Jane Shaab pointed out other BioPark facilities, such as the Maryland Proton Treatment Center, the Maryland Forensic Medical Center, the newly added Lion Brothers Building, and the construction site where work has begun on BioPark Building Three, a facility that will double the number of BioPark employees. 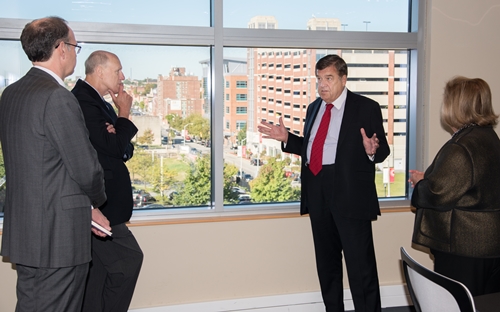 This month, the Association of University Research Parks named the BioPark its Outstanding Research Park of 2017, noting it has "created a robust community of innovation while being an integral participant in the rejuvenation of West Baltimore. The park has generated over $400 million in capital investment."

Ruppersberger came for an update on the growth of innovation and economic development fostered by the BioPark as well as for a chance to hear from the leaders of local biotechnology companies about ways Congress can help clear the path for further advances. "What I want to hear from you is, what would you like me to take back?" he told the group.

Marco Chacon, PhD, assistant vice president for industry alliances at UMB, expressed a concern felt by many technology companies large and small about the availability of skilled foreign workers. "I've enjoyed the opportunities that this country has offered through the history of the country with wave after wave of immigrants, and I'm very concerned of late of policies that are cutting across the wonderful tradition that built this country," he said, adding, "I would say 25 percent of engineers and chemists are foreign-born."

Ruppersberger agreed that current immigration laws and policies often run counter to the interests of high-tech businesses. "You know the United States doesn't have exclusivity on being the smartest people in the world," he said. "And when people come to this country, they want to be here, they want to stay, and our immigration laws, when they graduate (from college), they have to leave."

A different sort of brain drain also sparked discussion: the difficulties faced in protecting intellectual property overseas. "Our worry is that there are companies that exist just to challenge and invalidate the intellectual property that we have," said Armand Girard, vice president of corporate development at GlycoMimetics, Inc. The congressman echoed those concerns, citing billions of dollars of IP lost to foreign companies each year. He also argued that cyber security needs to be a top priority for the country.

Several executives shared concerns about impediments to receiving U.S. Food and Drug Administration (FDA) approval for new drugs and therapies. "How do we incentivize the development of these products?" asked Brad Spring, VP of regulatory affairs and compliance at BD. Girard agreed and noted the difficulties in hiring and retaining the experienced FDA staff needed to study and approve new products. He also provided the example of his company's recent experience. "The trial in Europe for our product took about a year and a half. It cost us about $10 million and it took 16 patients. The FDA wants our study to use 550 patients. It's going to take us four years and take about $40 million," he said.

Although mindful of political challenges in Washington, Ruppersberger left the discussion expressing optimism that progress on many fronts can be made. "There is some hope," he said. "Anytime you can get academia and politics and business together, and you do it right, you'll have a home run."