From Refugee to CEO, Kayongo Makes a Difference

When Derreck Kayongo was 10, his family was rounded up with others from his Ugandan village and forced to watch as neighbors were randomly selected and killed by a firing squad under the military rule of Idi Amin.

“I was 10 years old, watching adults … people who are supposed to take care of us as kids, visit upon us the most grotesque picture I’ve ever had to witness as a child,” said Kayongo, CEO of the National Center for Civil and Human Rights and founder of the Global Soap Project, a nonprofit acquired by Clean the World that recycles used hotel soap and redistributes it to impoverished populations to help fight disease around the world.

Kayongo spoke to the University of Maryland, Baltimore (UMB) community as part of the President’s Panel on Politics and Policy speaker series Oct. 31 at the Southern Management Corporation Campus Center. 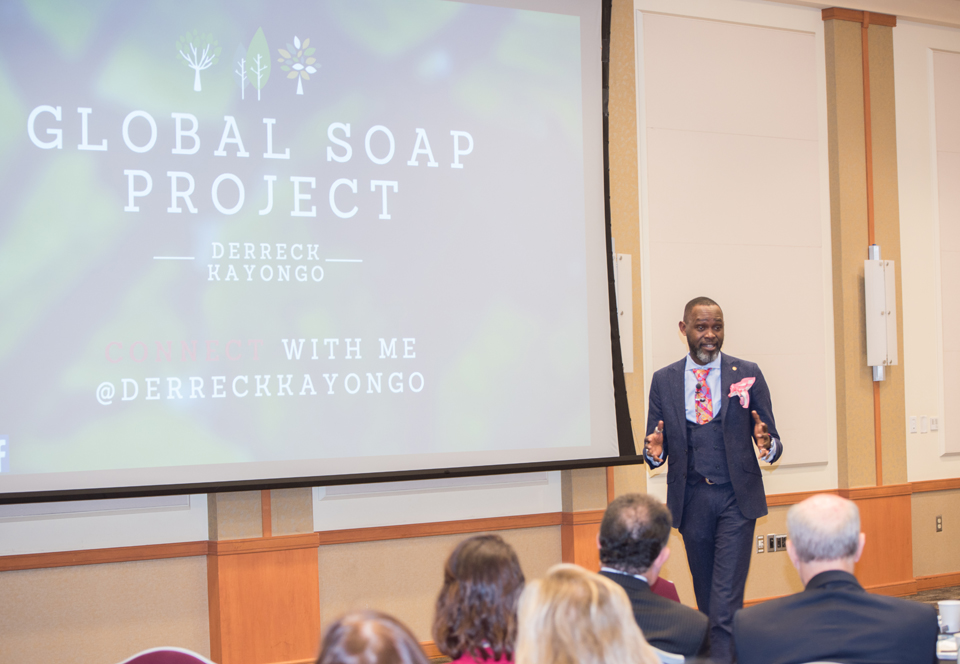 Derreck Kayongo, CEO of the National Center for Civil and Human Rights and founder of Global Soap Project, addresses the UMB community at the President's Panel on Politics and Policy.

Kayongo had the 150 faculty, staff, and students stunned into silence one minute with tales of the atrocities of his native country and laughing the next with his good-natured jokes.

“I’m going to speak to you a little about my life and I’m told … I have five hours to do that,” he joked before he started.

Kayongo shared his story of how his country went to war and he became a refugee. His father took him to Kenya and put him in the hands of an American woman while he went back to fight Amin. Kayongo eventually received a scholarship to attend college in the United States. Later, during a stay at a hotel in Philadelphia, he came up with the idea for the Global Soap Project.

“In the bathroom there were three bars of soap – facial soap, body soap, and hand-washing soap,” he said, expressing his amazement. “What’s the difference?”

He stuck two bars in his bag and was shocked when new bars showed up the next day. He continued “stealing” the soap but realized he might have to pay for it and admitted his theft to the concierge, who laughed at him. It occurred to Kayongo to ask what the hotel did with the partially used bars of soap, and he was shocked to learn they were thrown out.

Kayongo began reflecting on the poor hygiene in Africa. Many times a midwife comes to help a mother give birth, but without soap to wash her hands, she ends up killing the mother with infection. He realized that he had two choices.

“I could have actually complained about how wasteful Americans are,” he said, but instead he decided, “this is a calling. … It’s one thing to say I don’t like this and I don’t like that, but what are you doing about it?”

Kayongo went about figuring out how to purify the soap (scrape off a layer, crush it, and put it in an airtight bag for two weeks). He then received the nod from the Food and Drug Administration and began the process of recycling soap. The first shipment went to Liberia, where the Ebola epidemic was going on.

“It’s amazing how being very clever with solving your problems can come in handy,” he said. “America’s approach to business is always to throw as much money at the problem as possible. … We’ve lost the idea of finding simple solutions to big problems.”

Critical to the success of his soap project were hotel housekeepers, he said. He easily got them on board, because the task gave their job added value.

“In changing the world, always look for the unlikely actors — that is where the real power is,” he said. “Guess who has the power to change things around? You and I. … I tell you, a regular kid comes to the U.S., develops a whole enterprise that now is a $10 million business and you think that somehow it’s supposed to be someone else? No!  …  You can actually go around and organize the whole universe around you and make things happen, and that responsibility always lies with you.”

Kayongo, the fifth speaker in the UMB President's Panel on Politics and Policy, said that he was lost at 10, and it took a whole village to bring him back. He also credits his parents for his success.

“It’s amazing what parents can do for a child … just by being remarkably available,” he said. “Parents are not available these days for kids and they don’t really think their role is so important to the construct of what will become, later on in life, a citizen.”

Asked about the greatest lesson he’s learned, Kayongo said that an ego could be a good thing and a bad thing.

“I didn’t want to be called a refugee as a kid,” he said. “But then I realized that would be my story.”

To learn more about the soap recycling efforts, visit cleantheworld.org.