Ashley Valis, MSW, executive director of UMB Strategic Initiatives and Community Engagement, moderated the panel discussion, which became heated at times and brought to light a number of the tensions between the community and the University.

Erika Alston-Buck, chief executive officer for Penn North Recovery and founding director of The Kids Safe Zone, a play space for neighborhood children, was the most passionate panel member. 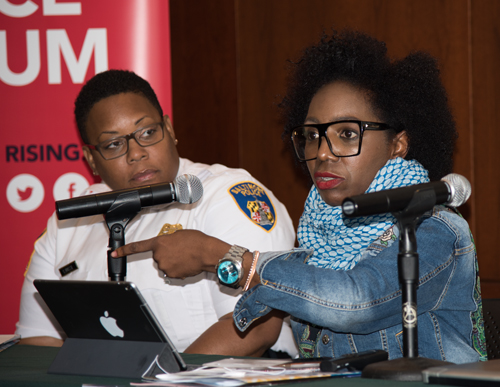 Erika Alston-Buck, chief executive officer for Penn North Recovery and founding director of The Kids Safe Zone, was the most passionate member of the RISING Baltimore panel session. She has a good working relationship with Major Sheree Briscoe of the Baltimore Police Department.

Valis thanked Alton-Buck for speaking her mind and lamented that there were not more University representatives present to hear the comments.

“It’s just block by block,” Valis said. “There are not enough resources to go around.”

The two-day RISING Baltimore symposium was based on the famous RISING Global Peace Forum held in Coventry, England, and focused on sharing community engagement strategies across communities and professions, between universities and communities, and across borders. Participants included residents of West Baltimore and community-engaged faculty from UMB’s seven schools.

Aside from Alston-Buck, the panel discussion included Major Sheree Briscoe, commander of the Western District of the Baltimore Police Department; Michael Seipp, executive director of the Southwest Partnership; and DeJuan Patterson, a consultant who has worked with the University of Maryland School of Pharmacy’s PATIENTS Program.

“We have a very diverse panel here,” Valis said in her opening remarks. “We are deeply ingrained in some of the works these folks are doing and we have, to be honest, more work to do with others.”

Seipp, whose community partnership has worked closely with the University, stressed the importance of realistic expectations.

“Figuring out realistic expectations about what anybody can bring to the table is very important,” he said, pointing out that the University is a public institution and limited in how it can contribute. He lauded UMB President Jay A. Perman, MD, however, for his efforts in working with the community.

“You guys should be proud of the fact that you have a University president that’s as committed as he is,” Seipp said.

A good partnership requires a shared vision, grass-roots engagement, mutual respect, an understanding of equitable distribution of resources, and a commitment to work toward empowerment rather than enablement, Seipp summed up.

Patterson also spoke about the importance of building a trusting relationship to establish a good partnership.

“Seeing community residents and organizations as partners and not just subjects, that’s a really important part,” he said. “Relationship building requires trust and trust takes time, but you can break that trust … immediately.”

Alston-Buck was clearly struggling to trust the University. She said the University has  offered residents $25,000 for their houses so they can build new buildings, and the residents have taken offers because they might be in debt, but then have no home.

“So where is the disconnect — where humanity doesn’t demand that we really help the community?” she asked. “Not research and numbers, but impactful outcomes.”

Other hot topic issues in the community included University police alerts on crime in the area, police protecting the University but ignoring crime right across the street, and University research that involves the community.

Seipp also stressed the importance of commitment over the long term in creating a working partnership.

“Neighborhoods didn’t evolve downward overnight, they evolved downwards – economically, physically – over generations. And so it’s going to take generations for everything to come back,” he said.

The University, which has programs supported by grants with timelines and expectations for results, is limited in this area, Valis explained.

“So how do we, as UMB, wrestle with that?” she asked. “That’s definitely something we need to learn from others about.”

Briscoe, meanwhile, said she could use a partner like the University. She says that police are the dot connectors. They come in contact with community members on their worst days, and the police do not have the resources, training, or equipment to impact them in a way that leaves them feeling valued and heard.

“I am in the business of service, but the problem for policing is that we are given limited tools to do that outside of handcuffs and a wagon,” she said. “So often the expectation is for us to criminalize behaviors that we know are coming out of social ails, that we know belong in the wheelhouse of the health system.”

In the end, it’s all about self-interest, Seipp said.

“The University leaders coming out and realizing that a healthy community benefits their institution, and residents understanding that the University really has assets that empower the community.”

After the panel discussion, Seipp said he felt there is a need for more time for dialogue, especially with neighborhood representatives present.

“There is a large divide between academicians and the reality on the street,” he said. “It takes time to get beyond the rhetoric, mistrust, and anger to have a real dialogue.”