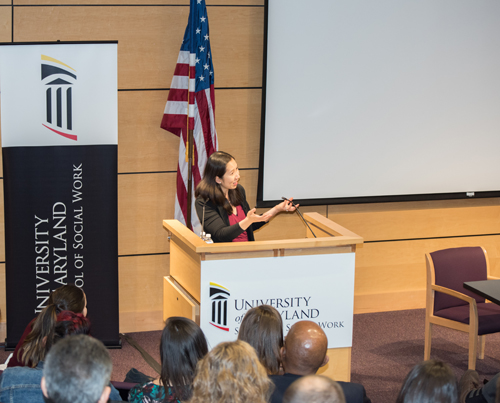 “I am one of many who are in awe of her ability to get to the heart of so many important topics,” SSW Dean Richard Barth, PhD, MSW, said in his introductory remarks.

“Your presence here indicates your connection to the School (of Social Work) and that you, too, are looking out to further the conversation regarding social justice and our nation’s future and to better understand how public health might assist us in addressing some of the issues we face today,” Barth said, as he welcomed an audience that filled the school’s auditorium to capacity. (See full video below.)

Thursz’ impact on the school was “huge,” Barth said, calling the late dean “a true champion of social justice. He would have delighted in furthering this dialogue of addressing social concerns through public partnerships and its impact on our community.”

In her address “The Power of Public Health to Level the Playing Field of Opportunity,” Wen spoke of the important impacts of one’s social determinants of health — those factors that contribute to how well a person lives, such as education, jobs, housing, transportation, and health care.

“We frequently talk about the statistic of this 20-year difference in life expectancy as we move from different neighborhoods in Baltimore,” Wen said. “The incredible thing about it is it actually illustrates that it’s not about health care because we live in the shadows of some incredible institutions, some of the best in the world. So if what determines how long you live isn’t about the medical care you get, if that’s not it, then what is it? That troubled me a lot as I was going through my medical training. We can do all the medical interventions that are proven – they’re evidence-based. We know that they work. But ultimately what determines the quality of that child’s life wasn’t about the medical care we were giving but also all these other factors in his life.”

Social workers see the same issues that medical professionals encounter when factors such as housing and access to healthy food determines a person’s wellbeing.

“You’re on the ground every day seeing the things our patients struggle with,” Wen said. “These issues are so big, where do we begin? I believe that public health can help to level the playing field to opportunity, that there are tangible steps we can take.”

Wen’s three principles to improving public health outcomes in the city include:

Starting as early as possible. Early interventions work, Wen said, citing the impact of B’more for Healthy Babies as one example. The program, operated by the University of Maryland School of Social Work’s Promise Heights initiative, has led to a 40 percent reduction in infant mortality in the past seven years.

Fighting stigma with science. When Wen issued a blanket prescription for the opioid antidote naloxone to all 620,000 residents of Baltimore, critics said she was encouraging people to use more drugs. Since October 2015, city residents have saved more than 1,200 lives by administering the medication. Addiction needs to be treated as the disease that it is rather than a choice one makes, she said.

“The stigma that is around addiction is incredible,” Wen said. “We stigmatize the disease of addiction and view it very differently than we do any other illness and we have to change that. Do we ever say to someone who is dying from a peanut allergy, ‘I’m sorry, I’m not going to give you an EpiPen because it might make you eat more peanuts next time?’ We don’t say that.”

An audience member, Stanley Weinstein, MSW ’68, a former president of the school’s board of advisors, asked Wen about the distribution of naloxone by nonmedical personnel.

“Social workers cannot distribute medications. It’s clear that this is not their scope of practice,” he said. “Should social workers be permitted to carry naloxone and distribute it in high-risk areas where many are working and having close intimate contacts with people who are at risk for death and the effects of the opioids?”

Wen pulled out a box of naloxone to illustrate how easy it is to use saying, “I strongly believe that every single person in the city should have it in their medicine cabinet or first-aid kit.”