The University of Maryland School of Dentistry (UMSOD) has become the setting of a series on dental education in which three students are being introduced to the nation by the American Dental Association (ADA).

On Nov. 6, the ADA News launched “Becoming a Dentist,” a four-year series in which the students will share their experiences over the course of their education with the organization’s 161,000 members. 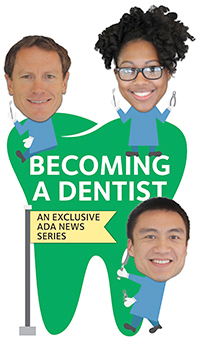 University of Maryland School of Dentistry students Ben Horn, upper left, LaShonda Shepherd, upper right, and Dan Yang, lower right, are shown in this illustration by the ADA News for its series, “Becoming a Dentist," in which these members of the Class of 2021 will become known to members of the American Dental Association. Credit - ADA News

“The ADA project is an ambitious undertaking that promises to be interesting and informative — and that, I hope, will bring national recognition to and discussion about the comprehensive biomedical and clinical education our dental students receive during their years here,” said Mark A. Reynolds, DDS, PhD, dean and professor.

“I am extremely proud that the School of Dentistry was selected to showcase the educational experience of its students,” he said.

The series, which also appears in the print edition of the publication being distributed to dentists across the county, focuses on Ben Horn, LaShonda Shepherd, and Dan Yang. “These are some of the faces of the University of Maryland's School of Dentistry class of 2021,” says the article.

The writer is ADA News Washington Editor Jennifer Garvin, MSJ, who provided this introduction of those whom she plans to follow through classes, clinics, and, to some extent, their lives at the University of Maryland, Baltimore (UMB):

“Because you're going to get to know them through the series, we'll be using their first names in the text of the stories:

For these three and thousands of other first-year dental students in the United States, admission is the first hurdle. More than 79,000 people apply for some 6,100 spots each year. At UMSOD, roughly one student for every 20 applicants was admitted in 2016. And once enrolled, dental students become members of the association, as an article accompanying the series explains.

“The ADA considers dental students to be a vital part of our organization,” said ADA President Joseph P. Crowley, DDS. “All dentists remember their own dental school experience and how hard they worked to get where they are today. We hope members new and old will enjoy reading this series. Today’s students face many challenges, from the stress of paying for school to where to practice after graduation to the constant changes to technology. We want them to know that organized dentistry is here to help."

In a letter to the UMSOD community about the ADA’s project, Reynolds thanked the three students for their willingness to share aspects of their lives for the good of the school and the profession.

Here’s more about their individual stories, as reported in the article:

Ben, a 34-year-old graduate of the U.S. Naval Academy, has deployed three times and is the married father of two toddler girls, Kendall, 3, and Parker, 1. "When I get to school at 6:50 a.m., I either find a spot in the dental school or library to continue studying or I go get a quick workout in at the UMB gym facility, and I mean quick, like 20-40 minutes because I know I need to study." he tells Garvin.

The decision to go back to school was not taken lightly by Ben and his wife, Caitlin, the article continues. “In 2013, while still flying F-18s full-time for the Navy, he began the long process of taking all the required prerequisites for dental school. In 2016, he applied — and received — a Navy Health Services Collegiate Program scholarship. After dental school, he will resume his Navy service, this time as a dentist.”

In the article’s introduction of the other two students, both alumni of the University of Maryland, College Park (UMCP), Garvin mentions a similarity in their having shadowed dentists to help prepare for the future.

“LaShonda ... shadowed Dr. Demion Cornwall at private dental practices in Oxon Hill and La Plata, Maryland, and volunteered at Community Clinic Inc., a public health clinic in Silver Spring, Maryland, so she ‘wouldn't be totally removed’ from the field,” Garvin writes of the period when Shepherd was working at a nonprofit and taking night courses to complete her prerequisites.

“Now that her dental school career is in full swing, she's still trying to find balance between studying, commuting and squeezing in time with her fiancé, Victor,” the article says.

“Dental school is intense,” she tells Garvin. Upon completion of the Doctor of Dental Surgery degree, Shepherd hopes to return to Grady, Ala., where she was raised.

Yang, whose family immigrated to the United States from China when he was 8, majored in bio-engineering at UMCP and took a job in research at the University of Maryland Medical Center. The article says “an opportunity to shadow Dr. Katelyn Niu convinced him dentistry was where he wanted to be."

ADA Senior Vice President Michael Graham, MPP, government and public affairs officer in Washington, D.C., is scheduled to speak Nov. 10 at noon at a “lunch and learn” session being held by the UMSOD chapter of the ASDA. He will be accompanied by Garvin, who is likely to become a familiar figure at the school in the months and years to come.