“When we engage with one another and really deliberately try to find a way to be a part of something bigger, that is when we are at our best,” said University of Maryland, Baltimore (UMB) President Jay A. Perman, MD. His audience of nearly 200 UMB alumni gathered at the National Press Club in Washington, D.C., Nov. 9 to hear insights and opinions from New York Times columnist Frank Bruni.

Sitting beside Bruni, Perman set the stage for an evening billed as “Politics and the Media in the Age of Trump.” It took less than a minute for Bruni to draw laughter from the audience as he shared the stress of being a journalist these days. “There’s something about the metabolism of the news today and the metabolism of this presidency that I feel like I’ve lived a week by 8:30 a.m.,” he said, adding, “I am shocked that from the moment he [President Donald Trump] took office until the present day he has never decided that maybe my behavior should be a little less splenetic.”

Serving as moderator, Perman walked Bruni through many of the issues of the day, beginning with so-called “fake news.” 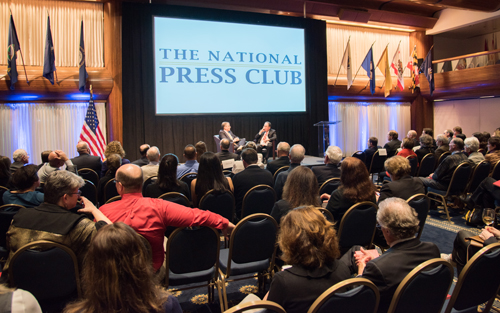 “With each passing week we learn more about the extent to which fake news, political disinformation, played a role in the 2016 election including the widespread manipulation of popular social media platforms,” Perman said. “I’m curious, what do you believe is the responsibility among companies like Facebook, Twitter, Google to patrol their platforms and weed out sources of disinformation?”

“They designed Facebook, they designed it to addict you. They designed it to eat up all of your time. They designed it brilliantly so you would get these constant affirmations and validations that would keep you coming back,” Bruni told the audience, referencing a revealing recent interview with Sean Parker, one of Facebook’s co-founders. “Hearing that, how can we now expect them to do this very difficult and high-minded thing where they actually try to mold and monitor their social platforms so that they actually in a civic-minded way that actually protects our democracy?”

The audience seemed particularly hushed by Bruni’s blunt answer to a question about gun control.

“I do not think they’re possible,” Bruni answered quickly. “Not in the near future, because to believe they’re possible, what’s that definition that insanity is to do the same thing over and over again and expect a different result? To keep predicting that one of these mass shootings, because there have been so many of them, is going to be the prompt is that kind of insanity.

“This is on voters as much as it is on politicians,” he continued. “Politicians vote and make decisions to survive. If enough of them believed that their inability to or their unwillingness to support gun control would end their careers in Congress sooner, they would vote differently. Voters have not sent them that message.”

“Help us separate the man from the policies, because many people say he’s [President Trump] a terrible individual but we love his policies,” asked one audience member.

Although outrage over Trump is prevalent among Democrats, Bruni answered, Americans have a history of separating the person from the policies.

“I thought a lot over the last month about Bill Clinton and Monica Lewinsky and impeachment,” Bruni said. “Bill Clinton’s behavior, whether you thought it was an impeachable offense or whatever, was execrable, and yet very few Democratic feminists turned on him. They separated the man from the fact that he was a better messenger for them.”

Another member of the audience expressed a fear that Democrats weren’t alone in experiencing low voter turnout in 2016, and that even more Trump supporters may turn out in congressional elections next year.

“I do worry about some of the people who sat it out,” Bruni agreed, sharing insights he gained at the January 2017 Women’s March, which was largely motivated by Trump’s election. ”There were probably people at that march from Michigan, from Pennsylvania, from Wisconsin, who bought a plane ticket or rode a long distance and went to that march, and I salute them for that. That’s great. But I bet you some of them didn’t vote. If they don’t vote in 2018 I think we need to rewrite the criminal code,” he said, sparking another round of laughter and applause.

One of the most talked-about issues in national news recently – sexual harassment and assault in Hollywood, on Capitol Hill, and across the nation – was brought up at the end of the evening.

“What’s happened I think is revolutionary,” Bruni told the audience. “I think we are at a tipping point because enough women have spoken out that I think they have really, really chipped away at the fear that women have of speaking out. I think women now are more likely to be believed than disbelieved. And I don’t think the culture will ever be quite the same.”