Robert L. Ehrlich Jr., JD, and Parris N. Glendening, PhD, MA, come from different sides of the political aisle and hold opposing views on many issues. But both share the title of former Maryland governor, and they agree on what’s causing the breakdown in cooperation between federal and state governments: hyper-partisanship and a Congress that is broken.

“There has been a dramatic change in what is permissible and encouraged with partisan bitterness,” said Glendening, who joined Ehrlich on May 1 at the University of Maryland, Baltimore (UMB) in the sixth installment of the UMB President’s Panel on Politics and Policy. 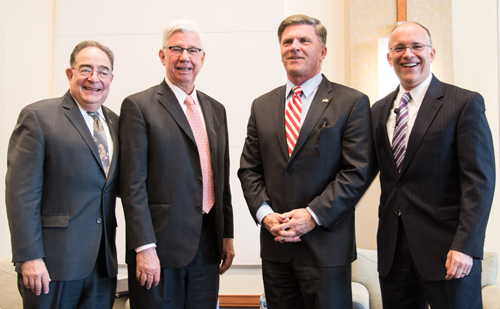 Glendening added, “You combine that with no one consulting in the intergovernmental area, and I’ll sum it up with a rather dark statement, which comes from a recent book about journalism: ‘The absence of an intergovernmental system, which would facilitate consultation, coordination, and compromise, combined with the extraordinary negatives of current political debate, is bad public policy, bad for our politics, and bad for our country.’”

Ehrlich agreed that the system is dysfunctional because of all the hostility between the political parties, but he added, “This is not new. When people fight over power, this is a byproduct. It’s just the vitriol has crossed a line lately.”

The two ex-governors – Republican Ehrlich succeeded Democrat Glendening in 2003 after the latter had served two terms – also talked about marijuana legalization, gerrymandering district boundaries, and federal-state cooperation in Maryland at the panel, which was moderated by veteran broadcast journalist Bruce DePuyt, senior reporter for the Maryland Matters website.

The panel series was launched by UMB President Jay A. Perman, MD, in January 2017 to examine issues important to the University community that are likely to be affected by the Trump administration and Congress.

Perman introduced Ehrlich and Glendening to the crowd of nearly 200 UMB staff, faculty, and students at the SMC Campus Center, saying, “There are no two better guests to discuss the role of federal actors in state policy than the two we have with us today.”

With that, the ex-governors talked about their relationship – “We can differ on policy and still be civil and still be friends,” Glendening said — before enlightening the crowd with their political and policy insights.

Glendening, who is now the president of Smart Growth America’s Leadership Institute and the Governors’ Institute on Community Design, opened by saying the name of the event, “The Intersection of Federal Policy and State Priorities,” should be changed to “The Decline of an Intergovernmental System and the Emergence of Extreme Personal Politics – A Bad Mix.” He traced the roots of federal and state governments working together to the 1930s, adding that by the 1970s most federal agencies and states had created offices to foster cooperation.

“Think about the last year, think about the changes in immigration laws and the new tax law, they were totally devoid of any intergovernmental discussions or any real bipartisan talks,” he said. “They’re looking at a new infrastructure program, but there is no input from state and local government. And there is chaos in the enforcement of marijuana laws” between states that allow medicinal or recreational use and federal law that forbids it.

Glendening favors allowing marijuana use for either purpose, whereas Ehrlich is in favor of medicinal use only.

“None of us takes the issue of yet another way to get high lightly. If we do that, we do it to our own detriment,” said Ehrlich, who is now senior counsel in the Government Advocacy and Public Policy practice group at King & Spalding LLP in Washington, D.C. “With regard to end-of-life situations, with regard to terminal pain situations, I’m for all of the above.”

Glendening compared the reform in marijuana laws, with 29 states having various degrees of legalization, to recent changes in gay rights, gay marriage, and immigration (states and cities creating so-called sanctuary cities), as being indicative of local governments serving as “laboratories of democracy.”

“I see it as good policy change coming from the states from the bottom up,” he said. “I’ll make this guarantee: The federal government will move to the same broad interpretations on marijuana – against illegal, organized distribution but permitting individual use under a regulatory system.”

Switching back to politics, the practice of gerrymandering – manipulating the boundaries of voting districts to favor one party – came in for particular scrutiny, because the redrawing of congressional lines has created “safe seat” districts where incumbents face no real challenge from the opposing party.

“This is why there’s all this interest in primaries as opposed to general elections,” said Ehrlich, who served four terms in Congress before becoming Maryland’s first Republican governor in 36 years. “Because when you have a safe seat, your fight is generally going to be in a primary from further right or further left, not from the other party. And when you have lots of safe seats, which you have in the House of Representatives today, you generally have a lack of incentive to sit down and try to negotiate.”

Glendening, who served three terms as Prince George’s County executive and was a university professor at College Park for 27 years, agreed that redistricting has exacerbated partisanship, noting that Maryland’s delegation in the House has gone from a 4-4 split in the 1990s to 7-1 in favor of the Democrats.

“With computers and everything else, you are able to draw a line — literally go down the street, turn on this corner, turn here, and you look at voting patterns and you can go out in two hours and draw a district that is to your liking,” he said. “So now you are in a district that is extreme. There’s no center to that district. And you can do and say anything you want, as long as you keep that base happy. And it’s the Democrats and the Republicans doing this.”

Democrat and Republican politicians in Maryland, however, have a great history of state-federal cooperation, both men said, suggesting that this should be a model for cooperation in Congress. Ehrlich pointed to two Maryland political legends – Barbara Mikulski in the Senate and Helen Delich Bentley in the House – as being particular supportive during his term.

“They both made it very clear that this is Team Maryland, and we need to work together,” Ehrlich said. “So egos, philosophical differences, and party were put aside. This is your uniform, and it’s yellow and black.”

Glendening said Maryland’s tradition of bipartisanship in this regard is because it’s a smaller state where many federal employees reside and relies on many aspects of federal expenditures.

“When I was governor, there were four Democrats and four Republicans in the House delegation, and you wouldn’t have known that if you were sitting in those meetings,” he said. “And that preceded weeks of meetings with staff to start to work out the details. It was a good system, and it still functions. The problem is, Congress is not functioning as well.”

When asked by an audience member if there was any hope that the acrimony between the major political parties would ease, Ehrlich answered succinctly: “No.”

But he expounded, saying, “In D.C. today, both parties do not respect rules. It’s dysfunctional. This is a structural problem, and it’s a serious problem.”

But Glendening, saying he was an eternal optimist, offered hope.

“Our country has faced challenges like this in the past. And just as we have prevailed and we have changed, I believe we can do so now,” he said. “I’m reminded somewhat of the biblical observation: This too shall pass. And that gives me the strength to keep going.”