University of Maryland, Baltimore (UMB) President Jay A. Perman, MD, is fond of telling his graduating students to “go out and change the world.” At UMB’s commencement ceremony on May 19, he was joined onstage by a UMB alum who had done just that — William P. Magee Jr., DDS '69, MD, chief executive officer and co-founder of Operation Smile.

“Since its founding 35 years ago, Operation Smile has provided hundreds of thousands of free surgeries for children and young adults,” Perman said in his introduction. “But the organization doesn’t only provide care; it builds self-sufficiency in partner countries around the world.” 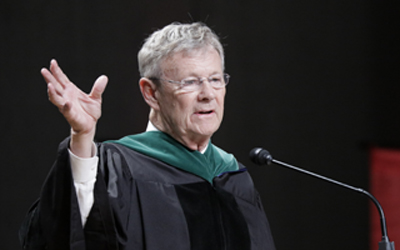 In his keynote address, Dr. William Magee, an alumnus of the University of Maryland School of Dentistry and co-founder of Operation Smile, told graduates to take advantage of their unique gifts.

Magee, a University of Maryland School of Dentistry alum from the Class of 1969, took the graduates from UMB’s six professional schools and Graduate School on a 15-minute emotional roller coaster at Royal Farms Arena. They laughed at his joke about an Irish-Catholic priest and fell silent when he discussed his work with children in resource-poor countries.

Magee said “there are no ordinary moments. Most of us never recognize the most significant moments of our lives when they are happening.”

Such as the trip to the Philippines in 1982 when Magee, his wife, Kathy, who was a nurse and social worker, and their 13-year-old daughter were part of a several-day mission to take care of children with cleft lips, cleft palates, and other facial deformities. “There was nothing altruistic about that trip for me,” said Magee, “I just wanted to get better at the surgery and it was an opportunity to operate on a large number of kids in a short period of time.”

But when the team could only treat 40 of the 300 children who were brought for care, the Magees knew they needed to do more. “We were going to go back, take care of those 260 kids and that would be that and we would get on with our lives as usual,” Magee recalled. “And that’s exactly how Operation Smile began. Reason leads to conclusions. It’s emotion that leads to action. So we made that decision to go back at that one moment in time. We hadn’t the foggiest idea of how to raise the money. Now, 35 years later, we’re in 60 countries,” he said, eliciting a round of applause. “We have 13,000 volunteers all donating their time to help someone who might never know their name but will never forget their kindness.”

His advice for UMB’s Class of 2017? “The world is out there for you. There is so much need that exists in our world and you have so much talent — find ways to explore it a little bit. Knowledge and science are crucial, of course, but knowledge alone will not suffice if there’s no heart. It’s only when our knowledge is imbued with intense passion and energy that knowledge has a chance to come to life. Find that place in your soul where that knowledge has a chance to grow, where you get to utilize it for people who need you.”

Magee was the first of three honorary degree recipients.

Ellen M. Heller, JD, a 1977 graduate of what is now the Carey School of Law who rose to become the first female administrative Circuit Court judge in Maryland, received an Honorary Doctor of Laws. Called a “genius for innovation” by Dean Donald B. Tobin, JD, Heller is credited with revolutionizing the civil litigation process in Baltimore. She helped establish and still presides over the Felony Drug Initiative, a program for non-violent felony drug addicts diverting them from incarceration into treatment. She retired from the bench in 2003 but has remained active at Maryland Carey Law, participating in symposia, dinners, and career development panels while funding several endowments and scholarships at the school with her husband, Shale Stiller, LLB, MLA.

Louis Angelos accepted an Honorary Doctor of Public Service on behalf of his father, Peter G. Angelos, JD. The senior Angelos, known to Orioles fans as the team owner since 1993, has done groundbreaking work in the legal field, building the Law Offices of Peter G. Angelos, P.C., into one of the nation’s leading personal injury law firms. He has taken on some of the most powerful corporations in the country, including asbestos manufacturers and tobacco companies. Over the years, Angelos has contributed nearly $10 million to the University of Maryland School of Medicine. He’s established endowed professorships in Surgery and in Entrepreneurial Sciences and also has pledged leadership funding to launch a multidisciplinary center for patients the world over with advanced lung disease and cancer.

Earlier, Joseph Fishbein, DDS, one of the graduates from the School of Dentistry, sang the national anthem and Robert Pevenstein, MBA, member of the University System of Maryland Board of Regents, had congratulated the 2,150 graduates in medicine, law, dentistry, pharmacy, nursing, social work, and biomedical, health, and human service sciences. “Dr. Perman continues to advance UMB as a force for education research and service. In short, this institution represents everything that is best about public higher education,” said Pevenstein, who reminded the graduates to remember to “give back” to the University that gave them so much.

Student remarker Faiza Hasan, JD, urged her fellow graduates to “value and respect our differences as much as we embrace our similarities.“ The law school graduate said, “Growing up female, Muslim, and Pakistani was hard at times,” but she expressed confidence in the future.

“We are the future leaders of our society. On the brink of social and scientific changes. Today is a day of celebration. A day of thanks, a day of love. But most importantly, today is a day of hope. Our work does not stop here. We are just beginning.”

University Marshal Patricia Langenberg, PhD, also of the School of Medicine, unfortunately missed the ceremony, recovering from a broken ankle. Read more about the marshals and other members of the platform party.

But the real stars of the show were the students, whom Perman lauded in no uncertain terms.

“The students we celebrate today take their place in a long line of distinguished individuals who’ve graduated from this founding campus of the University System of Maryland," Perman said. "I wish you hard work and good luck — always — and I ask that you remember your alma mater as you make your mark on the world. We’ll look forward to your help. And we’re all so very proud of you.”

Visit the commencement website for pictures, video, and more information.