Although the cuts in President Trump’s proposed government budget have raised fears in the scientific community, researchers can take solace in one single fact, Matt Hourihan, MPP, told an audience at the University of Maryland, Baltimore (UMB) on May 2. That is Congress, not the president, holds the purse strings in Washington, which is good news for the scientists in the room.

Hourihan, director of the Research and Development Budget and Policy Program at the American Association for the Advancement of Science (AAAS), was the latest speaker in UMB’s President’s Panel on Politics and Policy. 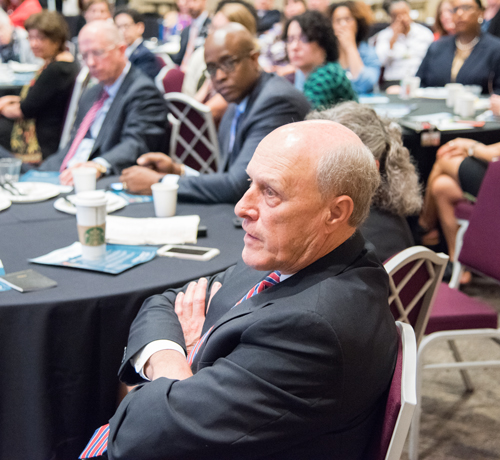 He was introduced by UMB President Jay A. Perman, MD, who said, “If you read my letter to the UMB community a couple of weeks ago about the March for Science, or the op-ed I co-wrote in the Baltimore Sun with UMBC President Freeman Hrabowski — my friend and colleague in science — you know full well how I feel about the budget put forth by President Trump. I won’t presume to know how you feel about it, but I imagine this next hour and a half is either going to give you a great deal of hope … or dash it to pieces.”

Hourihan quickly moved to appease the 75 UMB faculty, staff, and students at the Southern Management Corporation Campus Center. “We have really good reasons to be guardedly optimistic about what’s going to happen with the science and ecology budget,” Hourihan said. “The omnibus we received yesterday is a good example of that. My optimism is not blind optimism. It is based on history and more importantly on the rules — on who makes the actual funding decisions. Funding is in Congress’ hands. There is a good argument to be made that presidents’ science budgets don't matter.”

Hourihan, who is a regular source of information and analyses on past, present, and future science budgets for policymakers and the science community, showed the audience charts from the Obama administration’s funding. Even though Obama headed a “more science-friendly administration” than Trump’s, Hourihan said the Obama discretionary budget, which is where most research funding resides, “took a shellacking” because of sequestration, spending caps, and backlash that followed the Affordable Care Act.

“We have since had a jagged recovery,” Hourihan said. “Some agencies did better, some worse with science funding. The discretionary budget tends to be the center of gravity around which science agencies tend to cluster. By 2016 many agencies did better than discretionary spending levels. Congress, when they can, when they have fiscal room, do what they can for science, especially basic science. NIH, NSF, your Office of Science at DOE. We’ve seen that happen for several years under this realm of decline and there’s really no reason to expect that to change.”

Not that the Trump administration won’t try, Hourihan said. He said they want to shift $54 billion from the non-defense budget to the defense budget. The National Institutes of Health would take a 20 percent hit under the Trump plan, Hourihan said, which would amount to more dollars than the NIH awards given out in 2016. The Advanced Research Projects Agency-Energy would be dissolved.

“There is a really good case to be made that the Trump budget request in science is actually the toughest we’ve had since the end of the Apollo era at least if not the toughest era ever,” Hourihan said.

After comparing Trump’s proposed cuts to President Reagan’s in 1982 and 1983, Hourihan explained why he doesn’t see such steep cuts becoming a reality, pointing out, among many things, the difference between Trump’s and Reagan’s approval numbers, in the public and in Congress.

“Even Republicans in Congress oppose his budget,” said Hourihan, showing a chart that included quotes such as “draconian, careless, counterproductive, cannot pass, does not work” from GOP senators and House members.

After Hourihan concluded his remarks and answered questions from the audience, Perman returned to the podium and said “among all the things I’ve learned today — and I’ve learned a great deal — there is something I have not felt correct to say in a long time and that is ‘rah-rah, Congress,’” eliciting laughter from the audience.

Perman also announced the President’s Panel on Politics and Policy would be returning in the fall after a summer hiatus.