Amy Greensfelder pumped breast milk in a commercial kitchen. Mehgan Sidhu pumped in an airport restroom. Some of Jenny Afkinich’s friends have had to pump in a closet.

Knowing those situations are less than desirable, the three moms, all students of the University of Maryland School of Social Work (SSW), praised the grand opening of the school’s new lactation center on May 18. (View photo gallery.)

“Having a dedicated space with a door that locks, that you know you are not going to have people walking in on you is just ideal,” said Greensfelder. Her daughter, Georgianna Ashford, 9 ½ months old, was born just one month shy of when Greensfelder returned to school last August. 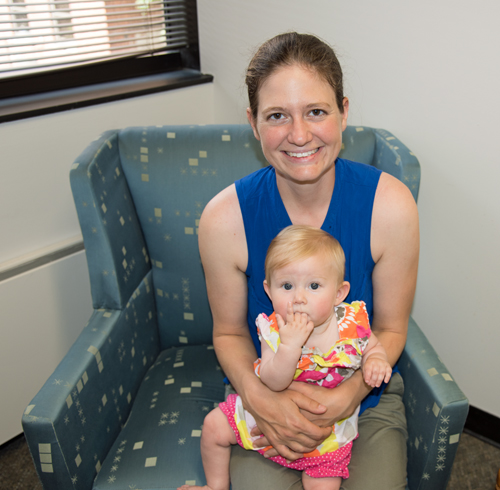 Located on the second floor of the SSW’s main building on West Redwood Street, the lactation center provides a private space for nursing mothers to pump breast milk or to breast-feed their babies. The room features two stations with hospital-grade pumps, a refrigerator to store milk and educational materials on the importance of breast-feeding, all in a soothing, relaxing setting. It is the eighth lactation center to be opened on the University of Maryland, Baltimore (UMB) campus. The centers are available for use by any UMB faculty, staff, or student who is a nursing mother.

Because of UMB’s commitment to breast-feeding mothers, Greensfelder said she was able to keep Georgianna on an all-breast milk regimen for six months, which was her goal.

“Without having access to lactation rooms there is no way we would have been able to do that,” she said, with her smiling daughter on her lap, following a brief ribbon-cutting ceremony to mark the SSW’s lactation center’s official opening.

“Providing a safe space for breast-feeding on campus is one of the important ways that we can promote not only the well-being of mothers and children but really also the workforce and all of our efforts to make sure that we are a family-friendly university,” Barth said. He thanked Nakiya Schurman, MSW, SSW’s lactation liaison, Arthur “Gene” Severance, MS, associate dean for administration, and Lily Fountain, PhD, CNM, RN, assistant professor, University of Maryland School of Nursing, for their efforts in creating the new lactation center.

“I think our faculty, staff, and students know the benefits of breast-feeding but they will appreciate the convenience of this site,” Barth said. “I salute all of you who knew this was important and made it possible.”

Perman, a pediatrician, pointed out that infant nutrition was a key focus of his academic career.

“While not every mom can breast-feed or breast-feed for as long as they’d like, we’re talking here about the ultimate in infant nutrition,” he said.

Research indicates that babies who are breast-fed are less likely to have diarrheal disease, and ear infections – illnesses that are generally not considered dangerous in infants, Perman said.

“But think of the impact that the little illnesses in infancy have on moms -- moms that want to study, moms that want to come to work,” he said. “If you have a healthier baby, you are much more likely to be able to be in the workplace, to be in your student obligations.”

For more information on lactation centers on the UMB campus, click here.