The generosity of the University of Maryland School of Nursing (UMSON)’s largest donors was recognized amid the festivities of the school’s convocation ceremony with the awarding of an inaugural medal.

“Today, we have the wonderful opportunity to begin a tradition at the School of Nursing by awarding the inaugural Dean’s Medal,” UMSON Dean Jane M. Kirschling, PhD, RN, FAAN, told graduates, their friends, and families during the May 19 ceremony at Royal Farms Arena. “This award was created as a way to recognize individuals who demonstrate an exceptional commitment to advancing the School of Nursing and its mission.”

The inaugural recipients of the Dean’s Medal for Distinguished Service are William “Bill” and Joanne Conway. The couple decided several years ago that they wanted their philanthropy to help individuals with demonstrated financial need receive the education necessary to obtain jobs. Further reflecting upon the assistance their families received from compassionate and caring nurses, as well as the tremendous need for additional nurses, the Conways chose to invest in nursing education. 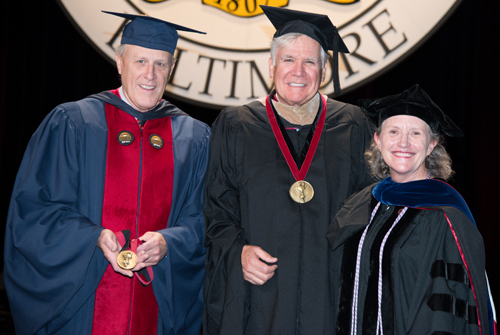 Since 2015, UMSON has received two transformational gifts from the Conways through their Bedford Falls Foundation. These gifts, totaling more than $7 million, have created extraordinary opportunities for individuals to pursue entry-level or advanced nursing degrees.

The first gift has allowed UMSON to provide full scholarship support to students in the traditional Bachelor of Science in Nursing (BSN) program and to registered nurses returning to school to pursue their BSN degrees. The second gift is funding scholarships for students pursuing advanced education through master’s and doctoral degrees as well as through the post-master’s Certificate in Teaching in Nursing and Health Professions. The Conways’ most recent gift is also assisting in expanding the school’s Family Nurse Practitioner (FNP) specialty to the Universities at Shady Grove, increasing educational opportunities for students throughout Maryland.

“The recognition of the Conways is about more than their philanthropy,” Kirschling said. “Bill Conway has also generously given hours of his time to meet with the Conway Scholars, to share his experiences of his life, to listen to their stories and hopes for the future, and to encourage them to work toward their dreams.

“It is about the spirit in which he has engaged with the School of Nursing, through the give-and-take of ideas and a willingness to try new approaches to ensure that we reach students who need scholarship support,” she continued, adding she hopes that the Conways’ generosity and commitment to UMSON inspires others to contribute to the school. “Through their vision and generosity, the Conways not only are changing the lives of current and future nursing students, but also are profoundly impacting the patients, families, and communities that these dedicated nurses will serve.”

The award, a bronze medal featuring the bowl of Hygeia, the Greek goddess of health, is the same imagery that appears on the School of Nursing pin that all graduates receive. The medals were handcrafted by Bruce Jarrell, MD, FACS, chief academic and research officer, senior vice president, and Graduate School dean at UMB. Jarrell, a surgeon by training, is an accomplished metalsmith and member of the Blacksmith Guild of Central Maryland. He has made numerous other creations on campus, including the School of Nursing’s ceremonial mace.

Bill Conway and Jarrell joined Kirschling at the podium as she placed the medal around Conway’s neck. Joanne Conway was unable to attend the ceremony.

Kirschling cited a quotation of Florence Nightingale – considered the founder of modern nursing, who was a close colleague of UMSON’s first superintendent Louisa Parsons. It reads, “I think one’s feelings waste themselves in words; they ought all be distilled into actions, which bring results.”

“Bill, I doubt if you have ever been compared to Florence Nightingale,” Kirschling said, “but when I think about a commitment of deeds, not words, I can’t help but think about how you and Joanne help show the way and inspire others through the words that you turned into actions that bring results.”

Conway offered his congratulations to UMSON’s Class of 2017.

“While I’m the person here getting this recognition and this medal … the real people being recognized today are you, your family and friends who helped you get here. Congratulations, well done,” Conway told the graduates.

“I can honestly say, without a doubt, that I would not be where I am today academically if someone did not care enough to fund my education,” said Tangoalem, who earned a BSN. Born in Cameroon, Africa, his family moved to the United States 10 years ago for better job opportunities. Tangoalem plans to continue his education in the Doctor of Nursing Practice program, specializing in psychiatry.

“I am proud to call myself a Conway Scholar,” he said.