Larry S. Gibson, JD, is well-versed in the historical role of African Americans in government. The University of Maryland Francis King Carey School of Law professor has directed local, state, and national political campaigns since 1968. 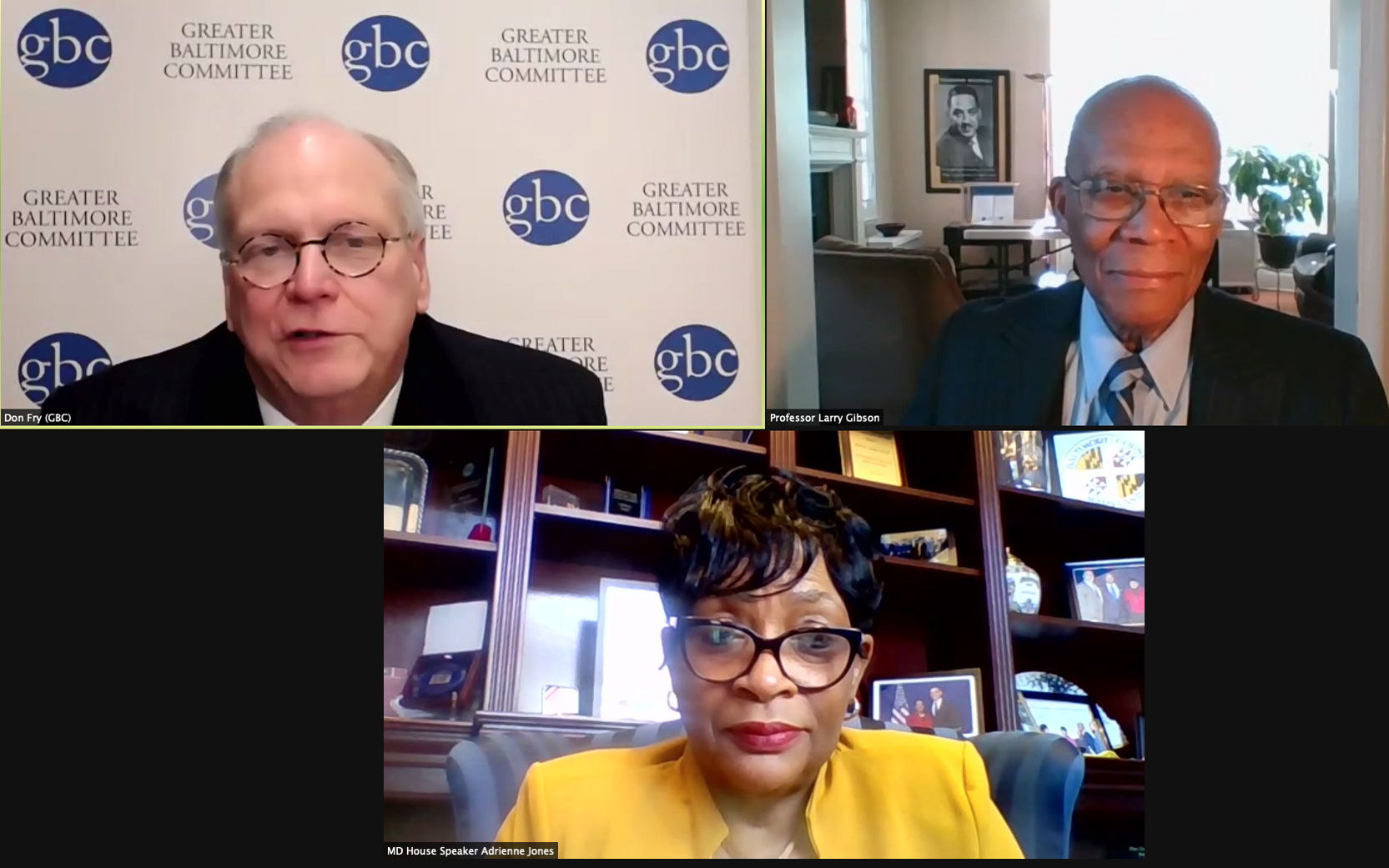 An avid local historian, Gibson also played a role in Baltimore’s civil rights movement and the fight for racial justice.

On Feb. 25, Gibson joined Maryland Speaker of the House of Delegates Adrienne Jones in a Greater Baltimore Committee Newsmaker Series talk to reflect on the influential role of African Americans in government.

Despite Baltimore having what Gibson described as “ambiguity” and “inconsistency” about race, calling it the “most Southern Northern city and the most Northern Southern city,” after the Civil War it became a center for black activism and political leadership. Gibson noted early Black leaders including Harry S. Cummings, a lawyer and Baltimore’s first black city councilman elected in 1890; W. Ashbie Hawkins and Warner T. McGuinn, lawyers who fought segregation in the courts in the early 1900s; and his personal hero Thurgood Marshall, whose first major case desegregated the University of Maryland School of Law and who later became the first Black justice to serve on the United States Supreme Court.

Baltimore has a lot to be proud of, said Gibson. “African American Baltimoreans have reshaped our nation’s laws and moved America toward its goal of equal justice for all.”

Adrienne A. Jones knows how to make history. She’s the first African American and the first woman to serve as House speaker and is using her influence to advance a racial equity and social justice agenda — dubbed the Black Agenda — for Maryland’s Black and Brown residents.

Though inspired by national protests in response to the deaths of George Floyd and Breonna Taylor, Jones said her Black Agenda is not only about policing. “We should be talking about how to create better access and more pathways to economic opportunities,” she said.

“These policy changes are what we need to make our economy stronger and to dismantle barriers for a historically disenfranchised community,” she said, noting that she plans to use the momentum of the current national conversation to make progress in Maryland.

Gibson expressed optimism that Jones is harnessing the power of the broader debate to improve lives locally. “I'm delighted to see what's happening here in Maryland,” he said.  According to Gibson, Jones is a continuation of a long history of strong African American leaders in the state. “There's been this traditional leadership from African Americans in Maryland and here we go again in a very positive way,” he continued.

Over the course of an hour, Jones and Gibson discussed a wide range of issues including the future of Baltimore, transportation as a civil right, and the role of black churches in political organizing.

Both Gibson and Jones offered advice to the younger generation energized by recent calls for social justice. “Be involved. Get engaged. Get your voice heard,” Jones counseled. Once they are involved, Gibson said it’s the older generation’s job to provide guidance. “What we can do, us older folks, is help them have a historical perspective. Our job is to help them with some degree of constructive longevity of the way things have been done over time."