“MPower is the most important tool we have to harness the intellectual power that exists in the university system,” testified Sarah B. Murthi, MD, associate professor at the University of Maryland School of Medicine and trauma surgeon at the R Adams Cowley Shock Trauma Center. 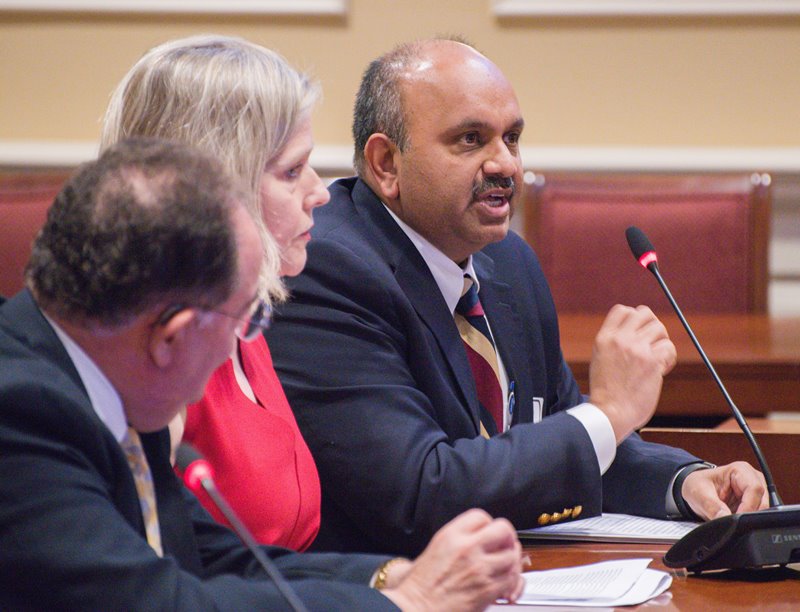 Dr. Amitabh Varshney speaks as Drs. Sarah B. Murthi and Jay A. Perman look on.

What began in 2012 as a collaborative effort between the universities to find and promote research and education opportunities that neither institution could achieve alone was transformed by law in 2016 into a more formal partnership, the University of Maryland Strategic Partnership: MPowering the State. MPower now boasts 25 research and education collaborative programs, each harnessing the separate strengths of the two universities.

Senate Bill 897 would provide an additional $2.5 million of funding in Fiscal Year 2020, $5 million in FY 2021, $7.5 million in FY 2022, and $10 million in FY 2023 and each year thereafter. The additional funding would be used to sustain current MPower programs and create new ones. In so doing, supporters hope to increase research funding to the state, create more opportunities for students, enhance private investment and job creation, and address many of Maryland’s most pressing issues.

Committee member and bill sponsor Sen. Bill Ferguson of Baltimore City shared a brief video (see below) with colleagues before turning to UMB President Jay A. Perman, MD, and the rest of the panel for comments. Perman quickly demonstrated MPower’s impact. In its brief history, the partnership has seen more than 500 joint research proposals, won $164 million in research funding, launched 88 startup companies based upon research discoveries, disclosed 326 inventions, and seen 58 of its technologies patented.

“But what I’ve found even more compelling than these numbers,” Perman said, “is the cross-university exchanges that bring transformative ideas together and make them into something even better, like bringing bioengineering students from College Park to our campus in Baltimore, where our surgeons show them the medical devices they have and what they actually need, like bringing investigators in pain management together with investigators in substance use disorders, so that we can jointly explore the science that will end our epidemic of addiction and like bringing medicine together with virtual reality to treat patients in ways we never even imagined.”

Sitting to Perman’s left at the witness table, Murthi and Amitabh Varshney, PhD, professor and dean of the College of Computer, Mathematical and Natural Sciences at UMCP, and co-director with Murthi of the Maryland Blended Reality Center, provided exciting examples of what MPower can accomplish.

“At the Maryland Blended Reality Center, Dr. Varshney and his team of geniuses are working with me and my team of dedicated trauma surgeons to really advance the field of medicine, not just in Maryland, but everywhere,” Murthi said. The center is creating what she called the next generation of anatomy education, reducing opioid use and subsequent risk of addiction by trauma patients, improving the treatment of chronic pain, and developing strategies to reduce conflict between urban youth and police, all using virtual reality, she said.

“Maryland will lead the nation and the world in this area of innovation, but we’re just one MPower story. There are many others just like us. MPower brings together the best of the university system to improve the lives of Marylanders,” Murthi added.

Varshney amplified Murthi’s vision. “What MPower has enabled us to do is to leapfrog the competition in the entire country. Computer science, together with medicine, is going to transform medicine into medicine 2.0,” he said. “What it is doing is allowing us to be much more competitive in being a magnet for talent from across the country and across the world, and where talent goes, that’s where enhanced competitiveness, economic development, and opportunities for growth go.”

Another panelist explained how MPower creates opportunities for students as well as researchers. Danielle Naundorf, a former UMCP student, completed an MPower-funded internship through the University of Maryland Agriculture Law Education Initiative that combined her agriculture background with her desire to pursue a career in law.

“I’m from a small town on the Eastern Shore. This internship opportunity opened doors for me that would not have been accessible otherwise," she said. “There are a hundred reasons why this internship was so formative for me. But the main point is that I would not be who I am or where I am without the efforts of MPower, and that’s why it’s so essential for your continued support to make sure that students like me can achieve their dreams.”

Many of the most advanced education opportunities for Maryland students are intrinsically tied to cutting-edge research programs fostered by MPower. A key example is one of MPower’s newest programs, explained Mary Ann Rankin, PhD, UMCP senior vice president and provost.

“With our NIST [National Institute of Standards and Technology] partners, we created a state-of-the-art advanced molecular imaging facility and cutting-edge cryoelectron microscopy facility at our Institute for Bioscience and Biotechnology Research in Rockville. However, we don’t have sustaining funds for the facility to allow us to take full advantage of the program to recruit the new faculty that we hope to recruit and develop new research programs and new student educational programs,” she explained.

Rankin also described exciting opportunities for research and education in the areas of neuroscience, learning and memory, addiction, and brain trauma recovery afforded by the MPower-sponsored Center for Sports Medicine, Health and Human Performance at Cole Field House at UMCP, and continued growth at the Maryland Blended Reality Center. “We could build many, many more things in this collaboration between computer science, computer engineering, and medicine,” she said. “The opportunities are endless and very, very important.”