In covering Donald Trump, New York Times White House correspondent Maggie Haberman has learned that not all of the 45th president’s tweets are created equal. In fact, Haberman says Trump’s Twitter feed “is not quite the window into his brain that people want to think it is” and that every post shouldn’t be considered breaking news.

“We should cover his tweets when they are newsworthy, which is different from what happened when he first came into office,” Haberman told a crowd of 200-plus on March 5 as the featured guest at the University of Maryland, Baltimore’s (UMB) President’s Panel on Politics and Policy. “At the outset, his tweets were covered every single time, regardless of their actual impact, because this was a new way of seeing a president do things. But I have this saying that I feel every tweet from Trump gets treated like it’s a four-alarm fire. But if everything is a four-alarm fire, then nothing is a four-alarm fire. 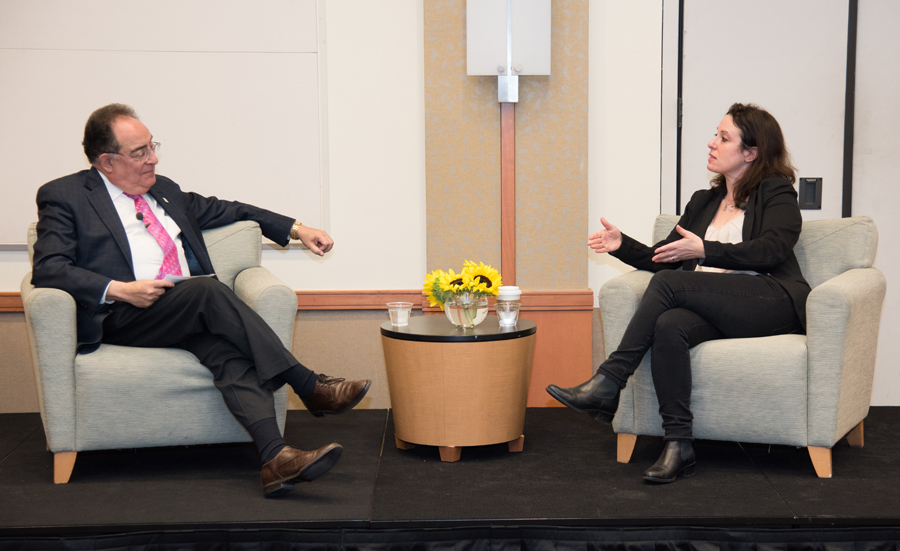 UMB President Jay A. Perman and New York Times correspondent Maggie Haberman at the President's Panel on Politics and Policy

“Some of these tweets are just him riffing,” she added. “So I think you have to assess what the actual news value is, not what you think he’s trying to do with the tweet.”

Haberman, who began covering Trump when he was a New York real estate developer, offered her unique insights on his presidency, discussed the state of journalism, and talked about her 23-year reporting career during the 90-minute event at the SMC Campus Center. It was the eighth such panel since UMB President Jay A. Perman, MD, launched the initiative in January 2017 to examine issues important to the University community that are likely to be affected by the Trump administration and Congress.

(See a video below.)

Perman kicked off the proceedings by praising Haberman, who’s also a CNN political analyst, for winning a 2018 Pulitzer Prize along with her New York Times colleagues for their coverage of the Trump administration and alleged Russian interference in the 2016 presidential campaign, as well as for receiving the Aldo Beckman Award for presidential news coverage from the White House Correspondents’ Association.

“She is one of the country’s most respected journalists and one of the most reliable sources for expert commentary on current events and national issues,” said Perman, who noted that Haberman has been called “a scoop machine” by The Week and a “Trump whisperer” by Vanity Fair. The latter moniker alludes to the relationship she’s built with Trump since the 1990s while working for the New York Post, New York Daily News, Politico, and now The Times.

“Quite frankly, she has access to President Trump that other journalists envy — or perhaps dread,” added Perman. After his introduction, Perman sat down with Haberman and asked her questions, such as is the president’s combative nature with reporters something of a show, does he turn down the temperature during private interactions.

“He does turn it down,” Haberman said. “And the most fundamental thing to understand about Donald Trump is that he actually hates one-on-one personal conflict. So the kinds of things he says about us on Twitter, in interviews, or when he’s speaking to a crowd, he rarely will say that one-on-one. He enjoys being around reporters. He likes those types of private engagements. He likes having a captive audience.”

The conversation steered into the topic of Trump’s penchant to shade the truth when speaking to the news media and how Haberman deals with that as a reporter. She said reporters will always have a difficult time figuring out what’s true or not with Trump, and that it’s exacerbated by the fact that he usually has two or more warring factions around him.

“He likes having people vying for the attention of the leader. So that creates its own problem because each side is shading information in a particular way that makes it harder to know what’s true,” said Haberman, who added that she and her colleagues have to take a source’s motives into account to a greater extent than normal. “We have to do this rigorous establishing of the basic facts, and that’s not typical in the reporting process. And we still do, frankly, because there still is this swirl of uncertainty.”

Of course, no discussion about Trump and the news media would be complete without delving into the issue of “fake news” and its impact on journalism and the political climate. Haberman said New York Times publisher A.G. Sulzberger has twice told the president that his constant criticism of the news media is enabling dictators around the world who use it as justification for crackdowns on the press.

“The president has sort of nodded and appeared to hear it and then moved on and resumed [bashing the media],” Haberman said. “He’s not going to change. It’s not that he doesn’t understand what he’s doing at this point, it’s that he doesn’t care. But the consequences are dramatic, because it creates permission structures for people who don’t wish to have a free press.

“Look, there are legitimate reasons why people don’t trust the news media, and we have done that to ourselves at times. But I don’t like the phrase ‘fake news’ because I think it’s meaningless at this point. I think the president’s appropriation of the term has rendered it non-functional.”

Asked about the seemingly growing disunity in the country by audience members following Perman’s questions, Haberman reminded them that the path to polarization didn’t begin with Trump, saying the roots of dissension can be tracked back to the Republican Congress and Bill Clinton in the mid-1990s, the contested presidential election of 2000, and the aftermath of the Sept. 11 terrorist attacks.

“We tend to treat Trump completely in isolation, as if everything he does is somehow unique and on its own, and that’s just not true,” Haberman said. “There are actually parts of him that are somewhat reminiscent of Bill Clinton — not in terms of policies, but in terms of style. So Donald Trump is not unique, but he is extreme. Donald Trump is not necessarily the origin, but he’s the accelerant.”

When Haberman was hired by The Times in 2015, she asked to cover Trump’s campaign for the Republican nomination. She said that she needed a beat and that other reporters weren’t exactly lining up for the assignment.

“My plan for 2016 was that there would be a campaign, and of course Hillary Clinton was going to win based on all of the polls,” Haberman said. “Then I was going to take a month off after the election and be with my kids. I never got that month off.”

So the Trump beat continues, and Haberman expects more of the same from the president.

“Somebody once asked me, ‘How is he different from what you thought he’d be as president?’ He’s exactly who I thought he’d be as president,” she said. “If you paid attention to the campaign, there should be very little that surprises you. … There’s a constant focus on the idea that there’s some kind of degeneration going on, but I just don’t see that. I think he’s who he is and who he’s always been.”