Sarah Tom, PhD, assistant professor in the Department of Pharmaceutical Health Services Research (PHSR) at the University of Maryland School of Pharmacy, recently received a five-year, $475,000 career development award from the National Institute on Aging to examine the relationship between individuals’ early life social environment and risk for developing Alzheimer’s disease and related dementias later in life. 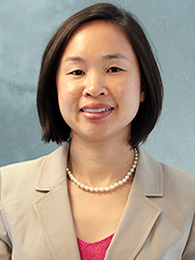 “As our understanding of dementia has evolved, researchers have discovered a complex relationship between the physical presence of brain disease and the onset of symptoms associated with the disease,” says Tom. “This study is unique in its aim to understand how early life experiences can influence brain health into older adulthood. We know that brain development occurs at an accelerated rate through age 5, so early life could be a sensitive period for the development of cognitive reserve. In fact, individuals with an advantage by age 5 might enjoy a lifelong advantage in terms of their ability to buffer against or delay the onset of symptoms for Alzheimer’s disease and other dementias.”

Dementia describes a decline in mental ability severe enough to interfere with an individual’s daily life. Alzheimer’s disease is the most common form of dementia. According to the Alzheimer’s Association, one in three seniors dies with Alzheimer’s disease or another dementia. Previous studies have uncovered a correlation between a disadvantaged early life social environment and individuals’ risk for developing Alzheimer’s disease and related dementias. However, it remains unclear whether an advantaged early life social environment correlates to increased cognitive reserve or lower levels of neuropathology (brain disease) altogether.

Tom and her research team will analyze four datasets from geographically diverse populations to complete the study: the Adult Changes in Thought Study, the Honolulu Asia Aging Study, the Religious Orders Study, and the Memory and Aging Project. The data include measures related to social environment that typically indicate opportunities to build cognitive reserve, including parental education, parental occupation, height, head circumference, and number of household members. “The opportunity to work with diverse populations means that we will be able to test our hypotheses across people with varying social experiences,” says Tom.

Tom notes that she hopes one important finding from the study will be a better understanding of the factors that individuals can modify to help ensure optimal brain health later in life.

“When we think about how to prevent or delay the onset of dementia, evidence suggests that waiting until symptoms are evident is likely too late,” says Tom. “We know that what happens to us as children is an important indicator for what might happen in adulthood, and perhaps investment in early childhood development programs may make sense not only for our health in childhood, but also for our health in adulthood. We hope that the results of our study will illuminate opportunities that we can implement earlier in the life course to help decrease dementia risk in older adults.”