Samba Sow, MD, MSc, director general of the Center for Vaccine Development in Mali (CVD-Mali), and adjunct professor of medicine at the University of Maryland School of Medicine (UMSOM), has been decorated as a Knight of the Legion of Honor from the French government. Sow, a native of Mali, will be formally inducted in July, on Bastille Day. This is the highest honor bestowed by the French government. He is receiving the award for his crucial role in Mali’s response to the recent Ebola epidemic. As a result of his leadership, the country successfully tracked and monitored all potential cases to minimize a potential outbreak. CVD-Mali is jointly maintained by the Ministry of Health of Mali and the UMSOM CVD. 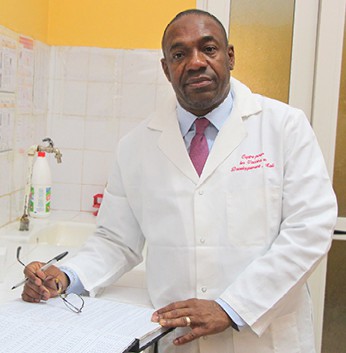 Sow began his close collaboration with the Center for Vaccine Development (CVD) in 2001.  The CVD is part of the UMSOM Institute for Global Health (IGH), which focuses on vaccine development and malaria research. This collaboration has led to the introduction of five lifesaving vaccines for children and adults in Mali and elsewhere in Africa. In the process, a team of highly trained Malian public health physicians was formed at CVD-Mali; this team was uniquely capable of responding to the Ebola epidemic under Sow’s leadership.

When the Ebola epidemic struck in West Africa in 2014, Sow and his team were prepared. As the epidemic spread, he responded. When most health workers fled the areas where the disease seemed to appear, he instead went to those places. He played a key role in setting up the Malian Ebola surveillance and containment network (for case detection and follow-up of contacts), emergency hospital unit, and border screening system. Collaborating closely with the Malian government, as well as civilian leaders, religious figures, and others, Sow and his team worked nearly nonstop for months. Their efforts were rewarded: Mali was one of a very few West African countries to contain the epidemic. In recognition of his strong expertise, he has been appointed special advisor to Malian President Ibrahim Boubacar Keïta.

Sow has other significant accomplishments as well: He helped lead clinical trials that resulted in the introduction of a vaccine that has played a major role in reducing Meningitis A in areas of Africa where the deadly disease was once common. More than 220 million people have received this vaccine in 26 countries. In Mali, he has also been a key actor in implementing Gardasil, a vaccine against cervical cancer, as well as vaccines against meningitis, pneumonia, and diarrheal diseases.

Sow received his MD degree from the Ecole Nationale de Medecine et Pharmacie du Mali, and his MSc degree from the London School of Hygiene and Tropical Medicine. Throughout his career, he has conducted research on vaccines, infectious diseases, and public health in Mali and Africa, and has been crucial in the country’s fight against leprosy. He has authored or co-authored more than 90 scientific articles and chapters and serves on high-impact international committees overseeing the use of vaccines in developing countries.

“Dr. Sow has devoted his career to saving lives, especially the lives of those who are most in need of help. Ebola has been a major public health threat in Africa and elsewhere. His work has significantly decreased this threat,” said University of Maryland School of Medicine Dean E. Albert Reece, MD, PhD, MBA, who is also the vice president for Medical Affairs, University of Maryland, Baltimore, and the John Z. and Akiko K. Bowers Distinguished Professor. “His tireless and heroic work has succeeded in doing just that, many times over. I am very happy for him – he fully deserves this impressive honor.”