How to Be an Anti-Racist: A Follow-Up Discussion

After Ibram X. Kendi, PhD, MA, talked to a University of Maryland, Baltimore (UMB) audience about his book “How to Be an Antiracist” in February, UMB leaders decided to continue the conversation by sponsoring discussions about the book and its topic. Four of the discussion facilitators took turns talking about their sessions and the feedback they received from participants during the June 17 edition of Virtual Face to Face with President Bruce Jarrell.

Among the key takeaways was that UMB needs to continue its conversations around diversity, equity, and inclusion (DEI) and anti-racism, while striving to be proactive in assessing and addressing these issues in the University’s policies and practices of the past, present, and future. 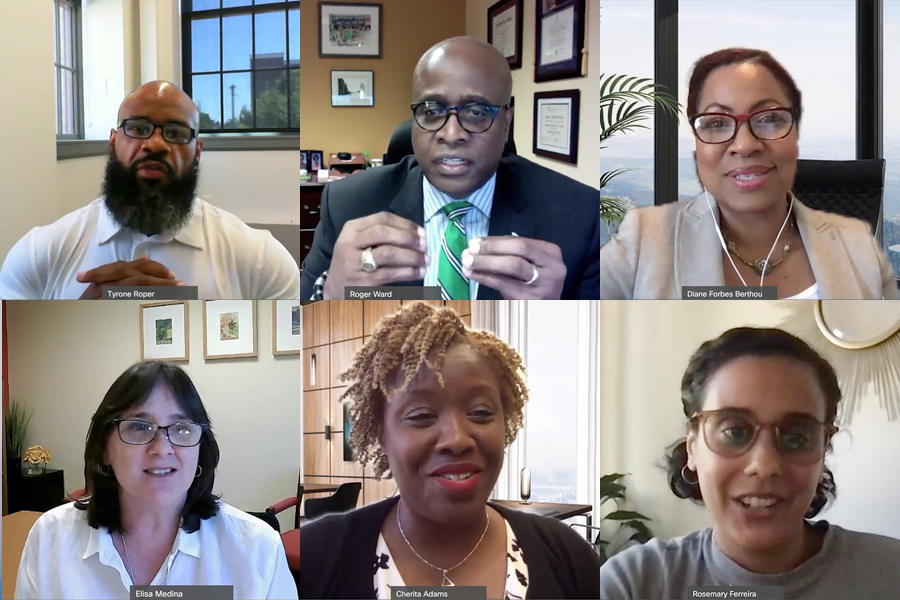 “We are an action-oriented institution, and we absolutely want to be more of an action-oriented institution on the topic of diversity, equity, and inclusion,” said Roger J. Ward, EdD, JD, MSL, MPA, interim provost, executive vice president, and dean of the University of Maryland Graduate School, who was the guest host in place of UMB President Bruce E. Jarrell, MD, FACS. “We’ve been having great conversations around this topic, and those conversations should continue after today’s program, because we are on this journey together.”

The book club discussions were organized by Nicole Palmore, MSW, director of diversity and inclusion at the University of Maryland School of Nursing, and included about 150 UMB students, staff, and employees including 19 facilitators (see list below). Each facilitator met with their group at least two times to discuss Kendi’s book and generate ideas for UMB to combat racism.

“This is an important conversation to have, and the experience was great,” Adams said when asked what motivated her to volunteer as a facilitator. “It was great to see people change, evolve, and also kind of struggle, because I think we learn better when we struggle a bit in some of our thoughts.”

Medina said she felt an obligation to contribute and was honored to do so. “As a white woman, I feel it’s important to pull my weight, to do everything I possibly can to advance this endeavor and be a more anti-racist person, to be a role model, and really to just listen,” she said. “Our greatest learning, I believe, often happens when we are pushed into our discomfort zone.”

In February, Kendi said that being an anti-racist involves much more than simply saying “I’m not a racist” — that to be an anti-racist, you must work to change policies and practices that are harmful and create disparities among racial groups. Ward noted this as he steered the discussion toward the definition of anti-racism and how people can stay up to date on the language surrounding this topic.

“And so we need to name white supremacy and anti-Blackness, and we need to use this language to truly address racism, because these are the foundations of racism.”

Said Forbes Berthoud: “What is really important is using language to validate, understand, and communicate the experiences of those most affected and marginalized by our social and historical conditions. What I’m most concerned about is this: Are we attending to the structures, policies, decisions, processes, and outcomes that have affected and marginalized persons of color, persons who are not able-bodied, people in the LGBT community, and so forth?”

Regarding the actions UMB can take to support anti-racism and DEI efforts, Roper said one area of potential improvement would involve the University reviewing its admissions process.

“Do we have a process that excludes individuals who have come through Baltimore City schools and/or colleges that may not have the grading scale to allow them admission into the University?” he asked. “It’s things like that where I think we need to have a very intentional lens on how we look at policies across the University.”

While praising Kendi’s scholarship, Forbes Berthoud helped to wrap up the program by recommending that members of the UMB community also explore the work of Beverly Tatum, PhD, MA, an author, educator, psychologist, and expert on the topic of racism, and by sharing Tatum’s “moving walkway” analogy.

“Dr. Tatum says she sometimes visualizes the ongoing cycle of racism like a moving walkway at the airport,” Forbes Berthoud said. “Active racist behavior is the equivalent of walking fast on the conveyor belt. Passive racist behavior is the equivalent of standing still, so you’re standing there and not doing anything. But the conveyor belt moves the bystanders to the same destination as those who are actively walking.

“So it is really important to think about our collective commitment as it relates to anti-racism, but also as it relates to all other forms of oppression — at the institution, in our communities, and more broadly in society — that will require all of us actively turning around on the conveyor belt and going in the opposite direction.”

Watch the Virtual Face to Face program by accessing the link at the top of this page.

“How to Be an Antiracist” Book Club Facilitators