Putting aside differences in time zones, cultures, and professional disciplines, international teams of researchers and clinicians met in Baltimore from May 28 through May 30 to share their previous work and to plan for the future. 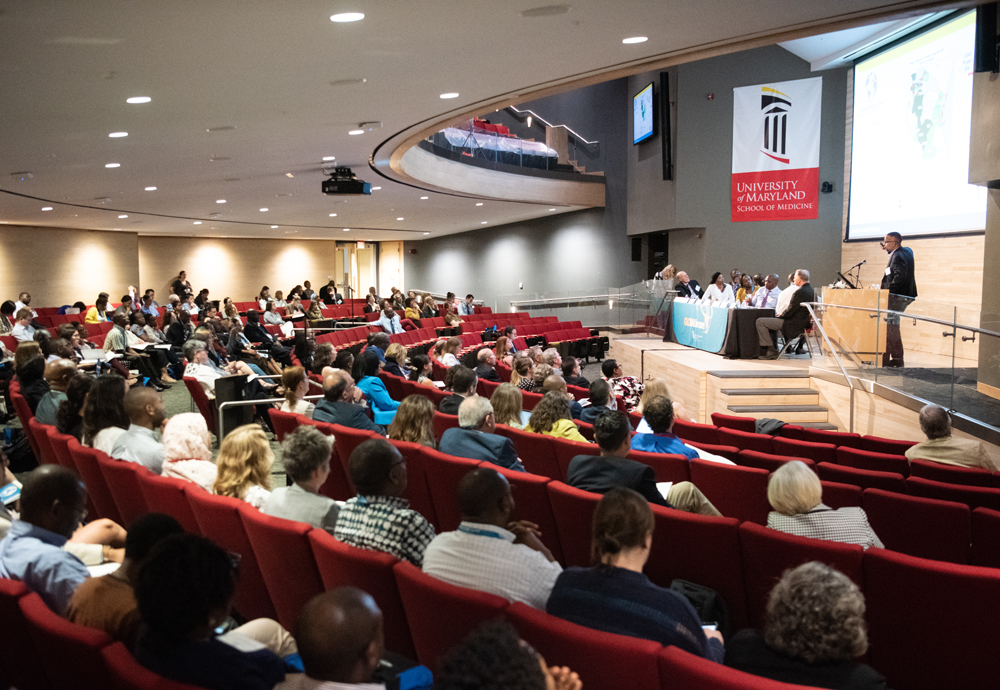 The main event, held May 29, featured two keynote addresses by international leaders with firm ties to UMB as well as six panel discussions. (View a video below and a photo gallery on Facebook.)

President Jay A. Perman, MD, said it felt “gratifying and humbling,” to greet several hundred people from nine different countries, “all part of one big UMB family working to advance health, well-being, and justice on a global scale.”

In introducing the first keynote speaker, Perman noted how Jody K. Olsen, PhD, MSW, had led international efforts at UMB in helping to establish CGEI and becoming its first director. In 2018, she was sworn in as director of the Peace Corps, returning to the federal agency to which she has devoted nearly lifelong service.

Olsen called attention in her speech to the fact that a fifth of Peace Corps volunteers work on health projects, including 1,000 in HIV-related projects. “We are a very active part of the work that you do,” she said, acknowledging the large contingent of attendees involved in work globally through the University of Maryland School of Medicine (UMSOM) and its Institute of Human Virology (IHV).

“The global community is committed to ending the AIDS epidemic by 2030, and in order to do this we need to remain focused on the granular data to ensure we are targeting the right people, in the right places, with the right intervention,” Olsen said. “Through our interdisciplinary approach, we need to see our clients as more than their diagnoses.”

The discussion by a panel of country directors for UMB covered research on malaria and other tropical diseases, but several of the presentations focused on curtailing the spread of HIV/AIDS and achieving viral suppression in patients who are living with HIV. Directors reviewed progress and challenges under grants, which are supported by a variety of funders, including the U.S. President’s Emergency Plan for AIDS Relief (PEPFAR).

One highlight was the description by Gambo Aliyu, PhD, MBBS, MS, interim country director for the IHV Center for International Health, Education and Biosecurity (CIHEB)–Nigeria of the daunting task of conducting what would become the world’s largest HIV/AIDS survey.

The one-year timing was a challenge and so were the physical and political complexities surrounding the Nigerian AIDS Indicator and Impact Survey. “It was very difficult,” Aliyu said. Besides the poor roads, the country has dealt with the militant Islamic group Boko Haram and bandits and kidnappers in remote areas.

UMB’s global reach was extolled by the summit’s second keynote speaker as well as by the first. Samba Sow, MD, MSc, adjunct professor of medicine at UMSOM, went so far as to call upon those in the crowd and upon the president of the university to ensure the growth of UMB’s global health effort. “I promise,” Perman replied.

Sow has been director general of CVD-Mali since its inception in 2001, and he credited CVD for facilitating the introduction by 2014 of five vaccines new to Mali. Among these is Hib pentavalent to help address high infant mortality.

During that period, he said, a coup in 2012 forced him to take refuge under his bed for nine hours while he talked with his colleagues at UMB. Unlike other funders that withdraw after coups, CVD continued its support that included funds to pay the staff. “They never abandoned me when I was in trouble,” Sow said. “This is global health.”

A democratic government was elected in 2013, and by the end of the year, Mali and neighboring Guinea were facing the Ebola Virus Disease (EVD) crisis. “Can you imagine if CVD-Mali dies because of the coup, and then Ebola would come?” he asked.

On a Friday afternoon, the first three suspected cases were brought to one of his center’s community clinics. “All I had were gloves” to protect against the lethal pathogen that had already killed the first physicians in Guinea, he said. In preparing to draw blood, he said he put plastic bags over his body and took a taxi to spare his driver in case the exposure would be fatal.

He went on to establish an Ebola treatment center at CVD-Mali after contending with a large snake at one potential clinic site and with community members who objected violently to all sites. “The military had to protect me,” he said.

“It went very well,” Sow said of his Ebola experiences, including his becoming principal investigator in the groundbreaking clinical trial of a new Ebola vaccine (ChAd3-EBO-Z) in collaboration with Myron M. Levine, MD, MD, DTPH, associate dean for global health, vaccinology and infectious diseases at UMSOM, and its team of researchers. The successful study compared the clinical acceptability and immune responses of 20 adults in Baltimore and 91 in Mali, among them Sow.

“The PI must take the first dose,” he said, recounting the deliberations of the Institutional Review Board that met in Mali.

He also told the summit how his work on Ebola led to a stint as Mali’s minister of health. And, again, he leaned on CVD in Baltimore for documentation needed to push for health reform. Though he is no longer in Mali’s government, Sow said, he remains hopeful about reform.

Strides are being made in curtailing infectious diseases not only in Africa but also across several continents, according to a panel discussion on CVD’s impact. Moderator Kathleen M. Neuzil, MD, MPH, FIDSA, professor of pediatrics at UMSOM and director of CVD, said it remains unique among academic centers for its full range of activities, from discovery through delivery.

“One of our real research strengths is in applying the tools of genomics to the study of infectious agents,” such as new diagnostics and outbreak tracking, said Claire Fraser, PhD, director of IGS and the panel’s moderator.

A panel on UMB’s global education offerings was designed to share information on assets such as Cooperative Online International Learning, or COIL, presented by Caroline Burry, PhD, MSW, director of global initiatives, University of Maryland School of Social Work, and the Global Health Certificate for nurses and health and human services professionals, presented by Yolanda Ogbolu, PhD, CRNP-Neonatal, FAAN, director of the Office of Global Health of the University of Maryland School of Nursing (UMSON).

The panel was moderated by Virginia Rowthorn, JD, LLM, a senior lecturer on global health law at the Graduate School and executive director of CGEI, which is marking the 10th anniversary of its Interprofessional Global Grant Program. “We’re very proud of the diversity of projects we’ve supported for students,” said Rowthorn.

Among them is “A Comparative Analysis of Emerging Infectious Disease Outbreak Preparedness and Response in Costa Rica and the U.S.,” presented by Mike Vesely, JD, academic program director of the Center for Health and Homeland Security, University of Maryland Francis King Carey School of Law. In 2018, six students from UMSON, UMSOM, and the University of Maryland School of Pharmacy went to Central America to examine the highly regarded response to Zika in Costa Rica. The mosquito-borne virus causes severe birth defects.

Vesely told the summit audience that the most powerful part of the grant project occurred at a national children’s hospital. UMB students met with physicians who care for children whose Zika has completely manifested. “This condition, this lifespan, these limitations are not going to change,” he said. “For our students, that was the most moving part of the trip.”

Additional parts of the three-day summit were tours for foreign visitors, a strategic planning meeting, and a poster session to showcase international collaboration. At the latter, for example, Valli Meeks, DDS, MS, RDH, clinical associate professor at the University of Maryland School of Dentistry, presented on oral health education at the primary level in Rwanda, where UMSOD and UMSON had each participated in that nation’s Human Resources for Health program to strengthen the health care system.

Pausing during the poster session, panelist Koech commented on the summit. “It is an opportunity to share with others what we’ve done well, and discuss what are the strengths and weaknesses.” Koech observed that, in her role as CIHEB country director in Kenya, she values the chance “to meet and network” and to learn about resources.