Heart disease kills more than 600,000 Americans every year, which translates to more than one in every four deaths. Although lifestyle choices contribute to the disease, genetics play a major role. This genetic facet has remained largely mysterious. But new research by scientists at the University of Maryland School of Medicine (UMSOM) has identified what may be a key player: a mutated gene that leads to irregular heartbeat, which can lead to a dangerously inefficient heart.

The findings were published June 7 in the journal Science Advances. The senior author of the study, Aikaterini Kontrogianni-Konstantopoulos, PhD, is a professor of biochemistry and molecular biology at UMSOM.

The study is the first to illuminate details of how this particular gene, which is called OBSCN, works in heart disease. The gene produces proteins known as obscurins, which seem to be crucial to many physiologic processes, including heart function. 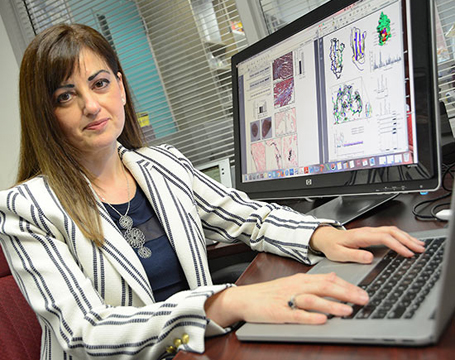 “This study gives us new information about the involvement of obscurins in the mechanics of heart disease,” said Kontrogianni-Konstantopoulos. “It suggests that people carrying a mutated version of OBSCN may develop heart disease."

For almost two decades, Kontrogianni-Konstantopoulos has been studying the OBSCN gene and obscurin proteins. Research has found that the gene is often mutated; some of these mutations may play a role in heart disease and certain cancers. She and her colleagues recently have shown that one mutation may play a role in the development of congenital heart disease. However, the cell processes that are affected by the OBSCN mutation have remained largely a mystery.

In this latest study, Kontrogianni-Konstantopoulos and her team unraveled this question. They focused on a mutation that has been linked to an enlarged heart, also known as hypertrophic cardiomyopathy. In this condition, the heart muscle becomes thickened and scarred, and has trouble pumping blood. She created a strain of mouse that carries the mutation, and then divided the animals into three groups: a group that experienced no stress, one that experienced moderate stress, and one that experienced significant stress.

Kontrogianni-Konstantopoulos is one of several scientists who first discovered OBSCN in 2001. Before that, it was all but unknown, hence its name. Since then, she has studied the gene, focusing on its role in both heart disease and cancer. She currently has several other ongoing studies of its effects in both areas.

It is not clear exactly how the mutated OBSCN gene causes heart problems. Her study is the first one to examine this question in relation to the obscurin mutations. She and her colleagues found evidence that the particular mutation they focused on may affect the ability of a protein called phospholamban to regulate the movement of calcium in heart muscle cells; this movement plays a crucial role in controlling how the heart contracts and relaxes. If this process goes awry, the heart does not function properly. Kontrogianni-Konstantopoulos says this work eventually could lead to targeted therapies for people who have OBSCN mutations.

“Heart disease is one of our most urgent national health issues,” said UMSOM Dean E. Albert Reece, MD, PhD, MBA, who is also the vice president for medical affairs, University of Maryland, Baltimore, and the John Z. and Akiko K. Bowers Distinguished Professor. “Dr. Kontrogianni-Konstantopoulos has elucidated this new aspect of the molecular basis of at least some cardiovascular illness. I look forward to seeing what she and others do to further build on this new discovery.”