Angela Hartley Brodie, PhD, professor emeritus in the Department of Pharmacology at the University of Maryland School of Medicine (UMSOM), and an internationally recognized scientist whose groundbreaking cancer research is considered among the greatest advances in treating breast cancer, passed away today of complications from Parkinson’s disease at her home in Fulton, Md. She was 82.

Brodie's research revolutionized the treatment of hormone-dependent breast cancer worldwide.  She pioneered the development of aromatase inhibitors, which are now considered among the most important contributions toward treating estrogen-driven breast cancer, the most common form of breast cancer in postmenopausal women. Her work developing aromatase inhibitors was a paradigm-shifting effort that began in the 1970s and was designed to reduce the level of estrogen in the body and thereby block the growth of cancer cells. Aromatase is an enzyme that plays a key role in the biosynthesis of estrogen, which fuels the growth of cancer cells. 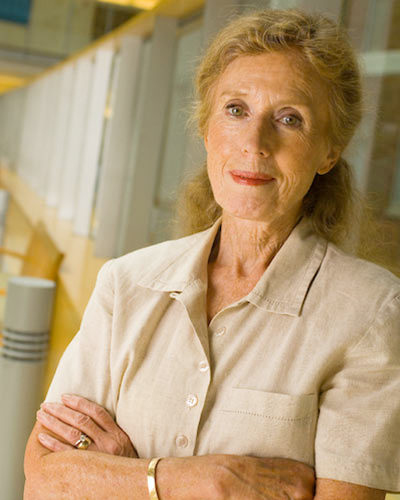 “Dr. Angela Brodie’s impact on the treatment of breast cancer has been unparalleled. It is because of her work that a disease that was once almost a certain death sentence, can now, for many, be successfully treated and managed,” said E. Albert Reece, MD, PhD, MBA, vice president for medical affairs at the University of Maryland, Baltimore and the John Z. and Akiko K. Bowers Distinguished Professor and Dean of the University of Maryland School of Medicine. “She never gave up on her vision of finding a new treatment with fewer side effects, and many women around the world have benefited from her perseverance.”

Brodie’s research spanned decades and built upon her initial discoveries to create more powerful and specific aromatase inhibitors. “Dr. Brodie’s pioneering research is equal to the greatest advances in treating breast cancer in the last 150 years,” said Kevin J. Cullen, MD, the Marlene and Stewart Greenebaum Distinguished Professor of Oncology at UMSOM and director of the University of Maryland Marlene and Stewart Greenebaum Comprehensive Cancer Center (UMGCCC). “Her work with aromatase inhibitors has saved the lives of thousands of women worldwide.”

“Despite the incredible impact of her science, Angela was perhaps the most generous and unassuming scientist I have ever known. She was extraordinarily humble about her achievements and never sought attention for what she accomplished. She mentored dozens of students and junior faculty over the years and so the impact of her work will live on for years to come,” Cullen said.

Brodie began investigating compounds to inhibit aromatase while at the Worcester Foundation for Experimental Biology in Shrewsbury, Mass., initially working in a laboratory with her husband, Harry Brodie, PhD, a chemist who synthesized the first selective inhibitors in the early 1970s, including a potent compound called 4-hydroxyandrostenedione (4-OHA). She continued her research with 4-OHA after coming to UMSOM in 1979, spearheading its development through clinical trials into a treatment for breast cancer. Released as Formestane for worldwide use in 1994, it was the first new agent in a decade specifically designed to treat breast cancer.

Early on, few other scientists gave her research much credence. Brodie’s first paper reporting the laboratory success of aromatase inhibitors at reducing estrogen levels was rejected because “they thought the finding was too obvious,” Brodie recalled. She tried to interest pharmaceutical companies, but many thought that her work was unnecessary and that chemotherapy was the answer. It was only through her persistence that her experimental compound ever made it to clinical trial. She ended up making small batches of the aromatase inhibitor in her laboratory at UMSOM and shipping it to the Royal Marsden Hospital in London where it was given to 11 women with advanced breast cancer as part of a clinical trial.

Among her many awards are the prestigious Charles F. Kettering Prize from the General Motors Cancer Research Awards in 2005, the Dorothy P. Landon-AACR Prize for Translational Cancer Research in 2006, recognizing “seminal contributions to our understanding of cancer through basic and translational research,” and the Brinker Award for Scientific Distinction from the Susan G. Komen Breast Cancer Foundation in 2000. Brodie was the first woman to receive the Kettering Prize, given for the most outstanding recent contribution to the diagnosis or treatment of cancer. She also was nominated for the Lasker Award.

In 2013, she was selected by the American Association for Cancer Research (AACR) as a fellow of the newly created AACR Academy. AACR created the academy “to recognize and honor distinguished scientists whose major scientific contributions have propelled significant innovation and progress against cancer.” She also received the Pharmacia Award of the American Society for Experimental Therapeutics in 2012.

Brodie’s distinguished career at UMSOM spanned 37 years until her retirement in 2016. She was a professor of pharmacology at the School of Medicine and a researcher in the Hormone Responsive Cancers Program at the University of Maryland Marlene and Stewart Greenebaum Comprehensive Cancer Center.

Her department chair in Pharmacology, Margaret McCarthy, PhD, said, “Angela was the heart and soul of the Department of Pharmacology. She was just as willing to serve on the thesis committee of a graduate student as to provide major leadership to the school in its research and outreach efforts. Angela was never too busy or too important, she participated in every activity asked of her and was a favored lecturer by the medical students. Although she had recently retired you wouldn’t have known it as she was regularly in her office working on manuscripts, advising students, and meeting with colleagues. Angela was a rare gem, and while she will be dearly missed, her impact will endure by the shining example of her scientific excellence, mentorship, and deep commitment to her community.”

In recent years, Brodie continued her work with aromatase inhibitors and expanded her research into a new area, prostate cancer. She teamed up with colleague Vincent Njar, PhD, and others to investigate inhibitors of androgen synthesis as potential agents for treating prostate cancer. Commenting on the collaboration he shared with Brodie, Njar recalled that he was just a visiting professor when he came to the UMSOM Department of Pharmacology and UMGCCC in 1996. “Today, I have my own independent laboratory and research programs, and much of that is due to Angela’s support. She has been a truly wonderful friend and colleague, unbelievably brilliant and an encouraging partner. May her soul rest in perfect peace."

She published more than 200 papers in peer-revised scientific journals and at one time was an associate editor for Cancer Research and edited articles for numerous other journals.

Brodie is survived by her husband, a retired NIH executive secretary for grant review; a son, Mark Brodie, a drama teacher in San Fernando, Calif.; and two grandchildren. Another son, John Hartley Brodie, PhD, a theoretical physicist, died in 2006.