Leaders in nursing education from throughout Maryland gathered at the University of Maryland School of Nursing (UMSON) on June 27 for the 2016 Maryland Action Coalition (MDAC) summit.

They met to share progress and to continue to guide implementation of recommendations in the landmark report, “The Future of Nursing: Leading Change, Advancing Health,” by the Institute of Medicine (IOM) and the Robert Wood Johnson Foundation (RWJF). 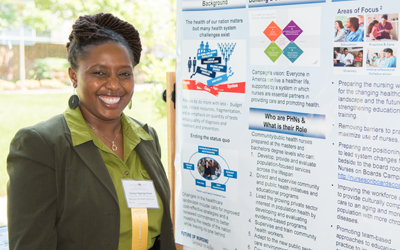 Attendees got a warm welcome and an overview of the summit’s offerings from MDAC’s co-leads. They are Jane M. Kirschling, PhD, RN, FAAN, dean and professor at UMSON and director of interprofessional education at the University of Maryland, Baltimore, and Patricia Travis, PhD, RN, CCRP, associate director of clinical research, Johns Hopkins University School of Medicine.

Highlights of the conference included 18 peer-reviewed posters and six podium presentations in addition to a keynote address, “Advancing Education Transformation, Nurse Residency,” which was delivered by three panelists.

The 2010 report on the Future of Nursing addressed the challenges facing the nursing profession, in particular the need to prepare the nursing workforce to meet the demands of providing excellent care to an increasingly diverse and aging population within a rapidly changing health care system.

Among its eight top recommendations were goals such as to increase the proportion of nurses with a baccalaureate degree to 80 percent by 2020; to double the number of nurses with a doctorate by 2020; and to implement completion of a “transition-to-practice” program. The latter, known as nurse residency, was the subject of the keynote address.

As part of a nationwide Campaign for Action supported by RWJF and by AARP, action coalitions were formed in all states and the District of Columbia.

“Each [action coalition] is working to contribute their voice on national legislative issues and participate in the ongoing conversations about the future of the health care system,” said Kirschling.

The co-leads were assisted in organizing the 2016 Maryland summit by Stephanie White of UMSON, who serves as project manager for the MDAC. The summit’s focus was to disseminate results of a broad array of projects that are advancing implementation of the recommendations through Nurse Support Program II (NSP II) grants funded by the Maryland’s Health Services Cost Review Commission (HSCRC).

“No other state in the nation has had such a robust funding stream,” Kirschling said. The HSCRC has renewed the program through 2020 and recently announced grants for fiscal 2017. Kirschling was met with applause when she noted that NSP II grant support for 2017 is over $17.5 million.

Travis and Kirschling joined in presenting a certificate of appreciation to Peg E. Daw, DNP, RN-BC, who is program administrator for NSP II grants funded by HSCRC and administered by the Maryland Higher Education Commission.

The National Academies of Sciences, Engineering, and Health (formerly the IOM) stated the value of nursing’s contribution to shaping health care delivery models, calling for full partnership with physicians and other health professionals in redesigning U.S. health care. In turn, the HSCRC recognized nursing leadership as essential to this process and in 2015 awarded funding for the Nurse Leadership Institute (NLI) at UMSON.

The joint presentation was titled “Building Nursing Leadership Capacity for the State of Maryland.” (View their remarks in the video below.)

Why the emphasis on leadership? Franklin posed the question and then replied, “Trends for our health outcomes are not improving, so it’s a clear call for improving designs for delivering health care.”

Montgomery discussed various benefits to participants, such as gaining self knowledge. They learn “how their own styles, their own biases, their own schema about things affect how they lead,” she said, describing these insights as “a really important part” in becoming more effective.

Posters were displayed in the atrium, and the authors and other attendees engaged in lively discussion during the midday break. Box lunches were obtained from Breaking Bread, part of the “Local Food Connection” maintained by UMB's Office of Community Engagement to promote nearby vendors in Baltimore.