A lot of things are changing in Washington, but academic medicine remains a bipartisan stalwart in the ever-important health care picture.

Such was the message of Karen Fisher, JD, chief public policy officer for the Association of American Medical Colleges (AAMC), who on Jan. 31 launched the President’s Panel on Politics and Policy at the University of Maryland, Baltimore (UMB). 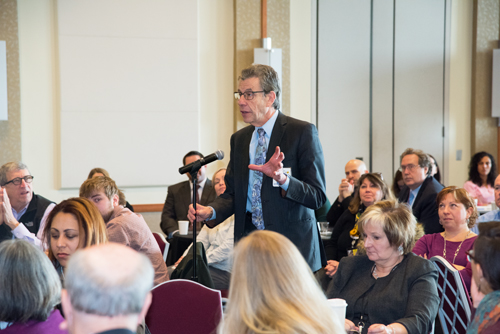 More than 100 UMB students, faculty, and staff attended the P4 kickoff event, many participating in the Q & A session that followed Fisher's presentation.

Introduced as one of the nation’s leading experts on Medicare by UMB President Jay A. Perman, MD, Fisher spoke for 50 minutes then answered questions for another half-hour, covering a wide range  of topics.

She pointed out that the AAMC is a nonpartisan organization, committed to the goal to advocate and educate about academic medicine regardless of what party is in power.

Smiling at the roughly 150 people gathered in the Southern Management Corporation Campus Center ballroom, she said, “This is not going to surprise the people in the room, but we need to let the policymakers know: Academic medicine is the bedrock of health care, particularly for vulnerable populations. Teaching hospitals in the AAMC make up 5 percent of all the hospitals, yet they train 75 percent of the residents, they receive more than 50 percent of research funding from NIH, and they do a disproportionate amount of Medicaid and Medicare charity care. They’re critical to the communities they serve and you see that right here in Baltimore.”

Before her current post with the AAMC, Fisher served as senior health counsel for the Senate Finance Committee for four years, where she played a key role in drafting the Medicare Access and CHIP Reauthorization Act of 2015, which is responsible for the new Medicare physician payment system.

She provided many insights about governmental affairs, and though she admitted the Trump administration presented some unique challenges, she expressed confidence that the AAMC would continue to represent tomorrow’s doctors as it has done since 1876.

“What we do for any new Congress or administration is provide a list of maybe 40-45 issues we focus on and what our policy positions are,” Fisher said. “We say we want to be a resource for you.”

Fisher said academic medicine and the AAMC are “well respected in the congressional halls of BOTH parties. They see academic medicine as people who are on the leading edge, and focusing on health care and research and education. The AAMC had a reputation when I was on the Hill — and still does — as a straight shooter.”

Fisher, who has more than 20 years’ experience in U.S. health care policy, said the AAMC reacted to the election outcome by releasing “The Work Ahead for Academic Medicine: Our Guiding Principles” in December. It included three principles.

The AAMC will strive to advance:
•    A health care system that provides high-quality, cost-effective care for all;
•    A well-trained, culturally competent, diverse health care workforce, improving health for all; and
•    Medical science to prevent disease, alleviate suffering, and improve the quality of life.

Fisher pointed out that reports such as these are provided for every new administration and that an August report titled “Policy Priorities to Improve the Nation’s Health” was released when the world thought Hillary Clinton was going to be the next U.S. president.

She expressed some fears; for instance, a $2 billion research funding increase included in a 2017 appropriations bill might not get passed, given that the Trump administration is focused on so many other areas. Despite the importance of fiscal issues, “health care is never going to go away. Every new administration poses new challenges, new opportunities,” said Fisher.

She admitted “this administration, with the language that has been used and the tenor of some of the dialogue from the campaign, has made this a very challenging time. But we will work through that and keep our focus on what we do and stay true to our principles.”

In his introduction, Perman spoke of why the President’s Panel on Politics and Policy was being launched.

“When I announced this speaker series in December, it was with a mind to come together as a University community to discuss what a Donald Trump administration could mean for UMB’s daily work and our plans for the future,” he said.

“After the president’s ‘interesting’ first week in office, some sweeping executive orders and, I think all would agree, a weekend marked by fear, confusion, and even more protests, now I think it’s absolutely essential that we do this. In very many domains, there’s an enormous amount at stake for us and for our University, for the mission we’ve embraced together and, most importantly, for the many thousands of people that we daily dedicate our lives and careers to serving.”

“Make your voices heard,” urged Fisher, who said that when she was on Capitol Hill, legislators read every piece of mail sent to them. “Policymakers love hearing from their constituents. Now it’s more important than ever.”