Shock Trauma Center runs under the leadership of Physician-in-Chief Thomas M. Scalea, MD, FACS, who is the Honorable Francis X. Kelly Distinguished Professor of Trauma Surgery at the School of Medicine. An international model for civilian and military trauma teams, Shock Trauma is also the epicenter for trauma research, patient care, and teaching, both nationally and internationally today. Since its inception more than four decades ago, Shock Trauma has provided world-class treatment for the region’s most critically ill and injured patients. Shock Trauma, the heart of Maryland’s unparalleled Emergency Medical Services System, is named for R Adams Cowley, MD, considered the father of trauma medicine who pioneered the “golden hour” concept and many of the lifesaving practices in modern trauma medicine. 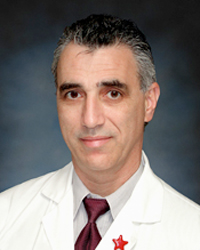 “No one gets up in the morning expecting to end up as a patient at Shock Trauma,” said Scalea. “Our team is committed to giving every person a second chance. The incredible stories of survival and recovery that happen here every day are not possible without the collaboration of partners who together make up Maryland’s safety net for our most critically injured and ill patients.”

The series, produced by Susan Hadary and John Anglim of MedSchool Maryland Productions (a division of the School of Medicine) for Discovery Life, premiered Jan. 1 and will air on subsequent Fridays in January and the first week of February.  Each episode captures in dramatic detail the fight to save lives when every second counts. The series shows the Shock Trauma team treating a variety of serious injuries, including motorcycle and car crashes, frostbite, gunshot wounds and severe brain trauma.

“Shock Trauma: Edge of Life depicts the hard work, skill, and dedication of our faculty physicians and the entire team at Shock Trauma,” said School of Medicine Dean E. Albert Reece, MD, PhD, MBA, who is also vice president of medical affairs, University of Maryland, Baltimore and the John Z. and Akiko K. Bowers Distinguished Professor. “Watching these men and women in action highlights the essential job they do, and underscores the importance of the work that we all do every day.”

Shock Trauma is also home to the School of Medicine’s Shock, Trauma, and Anesthesiology Research center, a world-class, multidisciplinary research and educational center focusing on brain injuries, critical care, resuscitation, and other areas of trauma care. It is the first research center in the nation dedicated exclusively to the study of trauma, its complications and prevention.