When Michael Steele, JD, surveys the U.S. political scene, he doesn’t see a particularly pretty picture, likening it to not a sticky situation but an itchy one.

“I’ve concluded that our politics is a lot like a rash right now,” says Steele, an MSNBC political analyst, former Maryland lieutenant governor, and one-time chair of the Republican National Committee. “It’s unsightly, it’s irritating, and it’s lacking any intellectual or ideological coherence. It’s one of the things where you often ask yourself, ‘Why is it still here? Why won’t it go away?’ It becomes very frustrating. 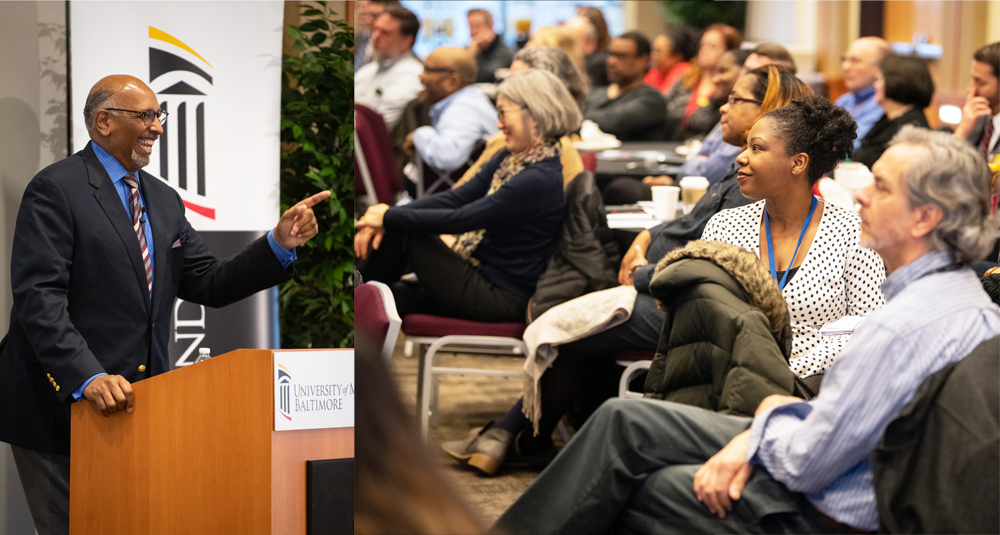 “Like a rash, it could prove to be inconsequential,” Steele added. “But also like a rash, it could be very detrimental. It may be a symptom of a malady or some other more serious problem that could have consequences beyond your capacity to deal with them.”

Steele offered this analogy and other keen political insights Feb. 25 to a crowd of 130 at the SMC Campus Center as the latest guest in the University of Maryland, Baltimore’s (UMB) President’s Panel on Politics and Policy, a speaker series that was launched in January 2017 to examine issues important to the UMB community that would likely be affected by the Trump administration and Congress.

(View a photo gallery and watch a video below.)

Steele touched on a wide variety of political topics during the hourlong session, including the presidential race, term limits, and, of course, President Donald Trump. He pointed to Trump’s 2016 election over Hillary Clinton as a symptom of the so-called political rash because the campaign was marked by anger rather than aspirations. He says voters were mad about Wall Street, trade deals, the environment, police shootings, and Republican obstructionism, to name a few, and “just plain angry at everybody else who was angry.”

“The story of our country has largely been about our aspirations, but that election was different,” Steele said. “That election tested the proposition that we are an aspirational people. What it really showed me is that we are really pissed off. Historian Alexis de Tocqueville said, ‘There’s nothing more dangerous than unmet expectations.’ And it was the unmet expectations of countless Americans that fueled the anger that defined that presidential cycle.”

Steele was introduced by UMB Interim President Bruce E. Jarrell, MD, FACS, who noted that his guest was the first African-American elected to statewide office in Maryland; hosts The Michael Steele Podcast; writes about politics, business, and law for various publications; and is a strong advocate for election reform.

“We’ve had some very distinguished speakers here for this series, and they have had different voices,” Jarrell said, alluding to previous guests such as retired U.S. Sen. Barbara Mikulski, MSW ’65, and former Maryland governors Robert L. Ehrlich Jr., JD, whom Steele served under, and Parris N. Glendening, PhD, MA, who shared the stage to discuss how they continue to reach across the aisle to work together on issues that benefit the citizens of Maryland. “But the main theme is to make sure that we hear what is right about this country and what we need to do to make it greater than it is now.”

In that vein, Steele urged the crowd to remain engaged in politics despite all the negativity and to remember that the United States remains a beacon of freedom in the world.

“Our country has of course witnessed appalling injustice and at times fallen far short of the ideals posited at our founding. Yet at crucial times in America’s history, institutions, political leaders, and citizens have pushed us to meet those ideals. In scores of national elections, we have abolished slavery, expanded suffrage, and provided the conditions that foster a standard of living that is envied around the world.”

Taking questions from the crowd, Steele was asked to ruminate on the state of the 2020 presidential race. He described former Vice President Joe Biden as having “sleepwalked” through his campaign and facing a make-or-break primary in South Carolina, and he compared Democratic front-runner Bernie Sanders to Trump.

“When you look at Bernie Sanders and Donald Trump, the reality is they are two sides of the same coin,” Steele said. “They both want to deconstruct the administrative state. They both want to take down the existing order of things. Last week, Sanders was talking about blowing up the system. Well, Trump wants to blow up the system, and he’s doing it. Their policies may be different, but the language is the same.”

Asked about term limits, Steele said he’s in favor of allowing House of Representatives members to serve four-year terms rather than two years and limiting them to four terms total. He also favors limiting U.S. senators to three six-year terms. But term limits aren’t a cure-all, he cautioned, noting that the ultimate oversight of elected leaders still comes from “we the people.”

“We can’t just think that turning out this person from office is now going to free up the logjam in the system, because there’s someone else coming into office right behind him who’s going to clog it just as much,” Steele said.

“The bottom-line lesson is that we still have to be responsible as citizens because we’re the ultimate check on our government,” he added. “Term limits could be one of those tools to fight tyranny, stupidity, laziness, and all of the things that can creep into government. But it doesn’t absolve you of the responsibility to stay on top of the men and women you elect.”