“The goal of the focused ultrasound treatment is to both lessen the main symptoms of Parkinson’s disease, which include tremors, rigidity and slow movement, as well as treat the dyskinesia that is a medication side effect, so that less medication is needed,” says principal investigator Howard M. Eisenberg, MD, professor and chair of neurosurgery at the UM School of Medicine (UMSOM) and chair of neurosurgery at the UM Medical Center (UMMC). 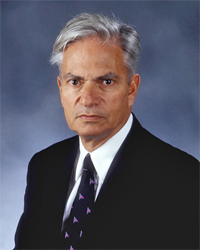 MRI-guided focused ultrasound is a noninvasive technique that uses sound wave energy to ablate cells within the body. Magnetic resonance imaging (MRI) allows doctors to define the target inside the body and create a heat map so they know exactly where to aim. In this case, doctors guide ultrasound waves through the skin and skull to precisely target the globus pallidus, a structure deep in the brain that helps regulate voluntary movement. This approach does not use radiation or invasive surgery.

As many as 1 million Americans have Parkinson’s disease, a chronic, degenerative disorder for which there is no cure. The second-most common movement disorder, Parkinson’s disease results from the malfunction or loss of brain cells crucial for movement and coordination. Symptoms include motor difficulties such as tremor, rigidity and impaired balance. People with Parkinson’s also can experience nonmotor symptoms of cognitive impairment, depression and anxiety, and autonomic dysfunction.

Current treatments include medication, with levodopa being the most widely used. In advanced cases, deep brain stimulation with surgically implanted micro-electrodes is used to treat motor symptoms of tremor, rigidity and dyskinesia. Dyskinesia (abnormal, distorted movement) is a common medication side effect that can drastically affect quality of life for patients with Parkinson’s.

This is the second clinical trial of MRI-guided focused ultrasound for Parkinson’s disease. The pilot study, also led by University of Maryland Medicine, began in 2015 and showed promising results.

“The results of the pilot trial, so far, are very encouraging,” Eisenberg says of the 2015 trial that involved 20 patients, most of whom were treated at UMMC.

The pilot trial focused on a subset of patients who had symptoms that were worse on one side of the body, as well as severe dyskinesia where medication had failed. The patients received focused ultrasound, and most experienced significant improvement in their tremors. The new, larger study aims for 80 to 100 participants and is designed with a softer inclusion criteria, so more patients will be eligible.

“For people with Parkinson’s disease and other movement disorders such as essential tremor, focused ultrasound is an appealing alternative to deep brain stimulation because it does not involve more invasive surgery,” says Paul S. Fishman, MD, PhD, professor of neurology at UMSOM and a neurologist at UMMC.

The procedure is performed in an outpatient setting. The patient is awake the entire time, lying in an MRI scanner with a head-immobilizing frame fitted with a transducer helmet, which converts energy from one form to another. Ultrasonic energy is targeted through the skull to the globus pallidus of the brain, and images picked up during the procedure give doctors a real-time temperature map of the area being treated. Doctors raise the temperature in a very restricted area of the brain to ablate tissue. During the procedure, the patient is awake, alert, and giving feedback, which allows doctors to monitor the immediate effects of treatment and make adjustments.

“University of Maryland Medicine is a world leader in pioneering MRI-guided focused ultrasound to become a new standard of care for treating many devastating brain diseases including Parkinson’s, essential tremor, and glioblastoma, an often-deadly type of brain cancer,” says E. Albert Reece, MD, PhD, MBA, executive vice president for medical affairs at the University of Maryland and the John Z. and Akiko K. Bowers Distinguished Professor and dean of UMSOM.

The multisite Parkinson’s study is expected to begin in February 2018 with UMMC as the primary treatment site. Insightec is funding the study. Eisenberg is a consultant to Insightec. For more information about this or other clinical trials for Parkinson’s disease, please contact Charlene Aldrich, RN, MSN, clinical research manager, at 410-328-5332.