The steak in Botswana is inexpensive and “really, really good” because they have 3 million cows there and only 2 million people. Nigerian women are remarkably open to new self-administered screening tools for cervical cancer. Malawi has five sewage treatment plants; only one is working to full capacity. The Jordan River in Israel has receded almost into a stream.

These are among the observations of the 2017 grantees from the UMB Center for Global Education Initiatives as they held an annual recap on Jan. 29 in the President’s Boardroom. Prodded by questions from UMB President Jay A. Perman, MD, the grantees not only spoke about their two- to six-week interprofessional research projects, but also the influence it has played on reshaping their future professional and personal goals. 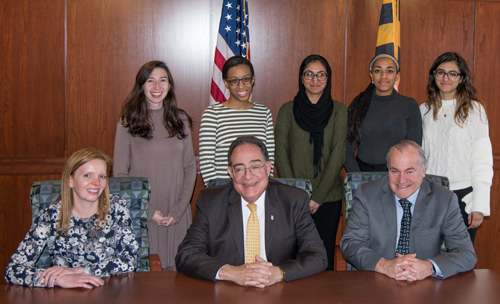 “I’m interested in doing travel nursing after I get my degree,” Graninger said. “I’d ideally like to go back to Botswana and South Africa where HIV is such a huge health crisis.” There is much to learn from countries like Botswana, which has one of the highest rates of HIV but also one of the most effective and comprehensive treatment programs.

Dave, who aspires to become an infectious disease physician, found it “enlightening to see how the nurses there not only looked at the patients and their health outcomes, but they also would talk to them about their families.”

Experiencing the system of universal health care practiced in Botswana up close also brought a new perspective to the two students, which Perman and Virginia Rowthorn, JD, LLM, executive director of the center, said is a strength of the grant program.

“Students come back from these trips with things that they would have never figured out here,” Perman said. “I see Virginia nodding her head. That’s why I appreciate all of you taking on these experiences.”

Teaming Up Against HIV

Chelsea McFadden, a University of Maryland School of Pharmacy student, was part of a team studying barriers to the new “Treat All” approach to HIV/AIDS treatment (treating all patients and removing conditions for initiation of antiretroviral therapy) in Rwanda and its capital city, Kigali.

“We did see quite a few barriers that were very common,” McFadden said. Pressed for details, she added, “There weren’t as many cultural barriers in terms of stigma as I expected, but barriers such as financial situations or concerns over revealing infidelity that prevent people from receiving treatment.”

Salam Syed, a second-year student at the School of Medicine, also learned about the social determinants of health in her monthlong project, “Impact of educational intervention on self-sampling for cervical cancer screening in Nigeria.” She was on a team looking to see if women in Nigeria were willing and able to collect their own cervical samples for cervical cancer screening.

“They were fine with it,” Syed told the group, “and they thought it was very easy. Some would come to us afterward to volunteer their time, saying, ‘If you need us to teach other people how to do it, sign us up.’ ”

A follow-up study Syed is involved in with the Institute of Human Virology Nigeria (IHVN, an outgrowth of UMB’s own IHV) will measure if self-sampling is as reliable as health care provider sampling.

She said the experience was transforming. “I’ve always been interested in women’s health and I am interested also in global health, and this experience solidified that for me,” Syed said. “But also there was a huge education component to our project, and I never really thought of myself as wanting to be a health educator, but I really enjoyed that aspect. I think that’s something I’d want to incorporate more into my career now.”

Syed was based in the Nigerian capital of Abuja where IHVN has its headquarters. “We find that our students benefit greatly from the deep expertise found among local researchers and health care providers at the IHVN facility in Abuja,” explained Bonnie Bissonette, EdD, director of education abroad and safety at UMB. “There is an amazing infrastructure there where the students live and learn with U.S. and Nigerian colleagues.”

Working with local health care providers also was part of the project led by School of Pharmacy assistant professor Emily Heil, PharmD, BCPS, “Antibiotic administration at the University Teaching Hospital, Lusaka, Zambia.” Heil’s group, which included pharmacy, nursing, and medical students, spent time in a Zambian hospital laboratory compiling a massive amount of data about antibiotic prescription practices and microbiology data. “We used Year 1 of our project to identify the challenges in slowing antimicrobial resistance and then we’re going back next year to work on a comprehensive antibiotic guideline for the folks on the ground in Zambia.”

Heil, who says in the United States the “No. 1 problem preventing patients with HIV from having their virus suppressed is a lack of medication adherence,” found the Zambian culture much different. “There, medication compliance is high, but you have other problems that contribute to the problem. It was a good way to study the comparative cultural components of the same public health problem. Plus Zambia is beautiful. We went during the dry season, so it was 70 degrees and sunny every day.”

Robert Percival, JD, MA, professor and director of the Environmental Law Program at the University of Maryland Francis King Carey School of Law, and law student Taylor Lilley found a less lush setting for their Israel research project, “Governance, capacity and safety for an off-grid water project in Jerusalem.”

“It was an interesting project because we spent a lot of time focusing on the availability of water,” Lilley said. “They’re trying to do a Red Sea/Dead Sea project, which would move water from the Dead Sea into the Red Sea to increase water. That’s problematic because the Dead Sea has receded significantly. We stood on the steps of a previously oceanfront restaurant and couldn’t see the Dead Sea for miles … and the Jordan River has diminished into a small stream.”

Percival recalled the evolution of the project. “The first project, we visited various sites in Israel and the West Bank. Then, in the second and third trips, we had multidisciplinary teams from the School of Public Health [at College Park], the School of Nursing, the business school [at College Park], and the law school,” he said. “The public health students looked at ensuring that the recycled water would be safe. The law students looked at regulatory barriers to expanding greywater recycling projects and the business students — who turned out to be real all-stars — looked at the economics of it. They asked, ‘How can you make this model cheap enough so that it could be readily used elsewhere?’”

The great surprise, Percival said, came at a UMB-UMCP summit after the second Israel trip. “It turned out Amy Sapkota from the School of Public Health was putting the finishing touches on a $10 million grant proposal to USDA, and the one component she was missing was legal expertise on the regulatory issues. So UMB got plugged into the grant and received the grant.”

Water also played a role in the other study Percival and Lilley discussed, “Malawi: Environmental Law Clinic Capacity Building at Chancellor College Faculty of Law.” The project last summer was at the request of professor Chikosa Banda, LLB, LLM, of the University of Malawi Chancellor College Faculty of Law, an international expert in human rights and environmental law.

“They have just launched the Environmental Justice and Sustainability Clinic there,” Percival said.

He said the need is dire. “There are five sewage treatment plants in Malawi, which is one of the most densely populated countries in Africa. Only one plant is working, and they took us to a site where there’s a broken pipe spewing raw sewage into a river that people use downstream to bathe and clean their clothes in. There are really serious issues there that haven’t been tackled to this point.”

Malawi has been a UMB project site since 2010, which started with malaria research and over the years has expanded to include a concentration on law because of the Center for Global Education Initiatives’ primary focus on interprofessional collaboration. The Malawi collaboration has taken UMB faculty and students there as well as brought Malawian faculty and research staff to Baltimore. It’s a practice of partnership and bi-directional learning that Flavius Lilly, PhD, MA, MPH, associate vice president of Academic and Student Affairs, said he hopes will continue.

“I’m so pleased these experiences have been so enriching for our students,” said Lilly, who also was joined by Bruce Jarrell, MD, FACS, UMB’s executive vice president and provost. “I think back to my experience studying abroad for six months and how it changed me completely. I can see it on some of their faces when they talk about their project that they’ve been changed by the experience as well.

“I hope that we continue to have conversations about how we can take the work of the Center for Global Education Initiatives and make these opportunities available to many, many more of our students who, as you know, Dr. Perman, have been asking for those kinds of opportunities.”

The Center for Global Education Initiatives grants are $5,000 for faculty grantees and cover student grantees’ airfare, which is the most expensive aspect of international projects. To learn more about the grants, click here. To read more about the projects, click here.