And she didn’t mention the National Football League once.

Instead, Hammond, a 1978 alumna of the University of Maryland School of Nursing who went on to leadership positions at Hampton University and Virginia State University, focused on examples of peaceful resistance by Dr. King and others and her own experiences with racism. 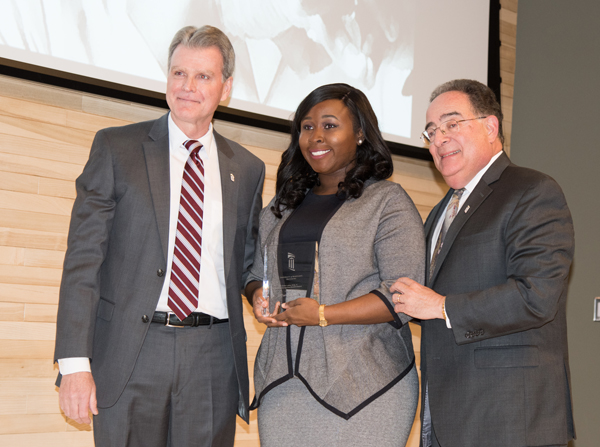 “A simple act, kneeling during the national anthem, changed everything,” Hammond said. “It transformed [quarterback] Colin Kaepernick into a lightning rod and a powerful symbol of activism and resistance. During the Montgomery bus boycott [in the 1950s] Dr. King was referred to as a lightning rod. There were other lightning rods throughout history: Crispus Attucks, Harriet Tubman, Booker T. Washington, W.E.B. Du Bois, Medgar Evers, Malcolm X, Thurgood Marshall, Muhammad Ali, and, yes, Barack and Michelle Obama.”

Hammond, who heads The Hammond Group, LLC, a higher education consulting firm, and is a senior consultant for AGB Institutional Strategies, experienced her own racism when her mother, who was raising seven children on her own, moved the family from New York to Mobile, Ala., to live with her parents.

The move was quite a shock to young Pamela, who had known integrated schools and public places in New York and now was in the Deep South with grandparents who had lived under Jim Crow laws.

“One Saturday morning my grandmother dressed me up in my Sunday best clothes because we were going downtown to buy new shoes,” Hammond recalled. “I was so excited. My joy waned as soon as I got into the department store and my 10-year-old brain kicked into gear.

“I saw two water fountains. One was labeled white and one was labeled colored and I just had to see! So I ran over to turn on the white one and I ran over to turn on the colored one and the next thing I know I was gripped by my neck, and as I turned around I saw something I had never seen on my Mama Cassie’s face before. I saw horror, I saw pain, I saw her eyes going back and forth scanning the area. I stammered out, ‘I was just trying to see what colored water looked like!’ ” Hammond recalled, eliciting laughter from the 100-plus gathered in UMB’s Medical School Teaching Facility Leadership Hall.

Turning serious, Hammond added, “She got close to my face and she said, ‘Child, you’re going to have to learn your place.’ Needless to say, we had a very quiet ride home.”

Hammond learned her place all right. After earning her bachelor’s from Tuskegee University and becoming what was then the only black, bachelor’s-prepared nurse at Johns Hopkins, she got her master’s at the School of Nursing at UMB (giving special credit to instructor and advisor Dr. Mary Neal) and her PhD at Old Dominion University.

As dean of the School of Nursing at Hampton University, she rolled out the first PhD nursing program ever established at a historically black institution.

When promoted to provost of Hampton University, she opened access to higher education by launching Hampton U, the university’s first-ever online program. She secured $40 million for research, scholarships, programs, and endowments.

When she was selected interim president of Virginia State University, she turned around an $18 million deficit and ended the year with a surplus.

Today, Hammond is proud of her life’s work helping the disenfranchised and the underserved. “My Mama Cassie would have been proud that this child learned her place,” Hammond said.

She urged the hundred-plus people in the audience to follow her lead.

“This audience is filled with health care professionals, lawyers, social workers, and others sworn to do no harm,” she said. “Have you thought about doing something about racism in America? About the poor and disadvantaged? Baltimore has 277 diverse neighborhoods. Surely you can find a place where you can serve.”

Host and UMB President Jay A. Perman, MD, implored action as well in his welcoming remarks on the 50th anniversary year of Dr. King’s death. “This day is an affirmation — an affirmation that there is strength in our diversity, courage in our compassion, and leadership in our service. We still have work to do, of course — hard work. As a University, as a state, as a nation we are not done.”

Tiffany Otto, a fourth-year student at the School of Dentistry, was named Outstanding UMB Student for organizing Universitywide forums where students could gather to discuss local and national events that have galvanized — and polarized — people.

The celebration also included two songs from the Union Baptist Church Senior Choir. Shorthanded because of illness, they asked for and received vocal support from the UMB crowd.

Hammond wrapped up her remarks by answering the question she began with, “Would Dr. Martin Luther King Jr. Take a Knee?”

She offered: “In 1964, Dr. King was recognized internationally with the Nobel Peace Prize, largely because of his non-violent stance in support of the rights of all people. As far as I’m concerned, that Nobel Peace Prize winner would have respected the non-violent movement started by Kaepernick in response to the death sentences and other violences that are being committed against people by those in authority.

“Would he have taken a knee at a football game? That’s anybody’s guess. But I do believe he would have started a march, and at the end of that march, everybody would have been on their knees.”